Kentucky isn’t the only state to mark a no-till first. North Carolina claims one of its own farmers also put their no-till crop in during 1962. 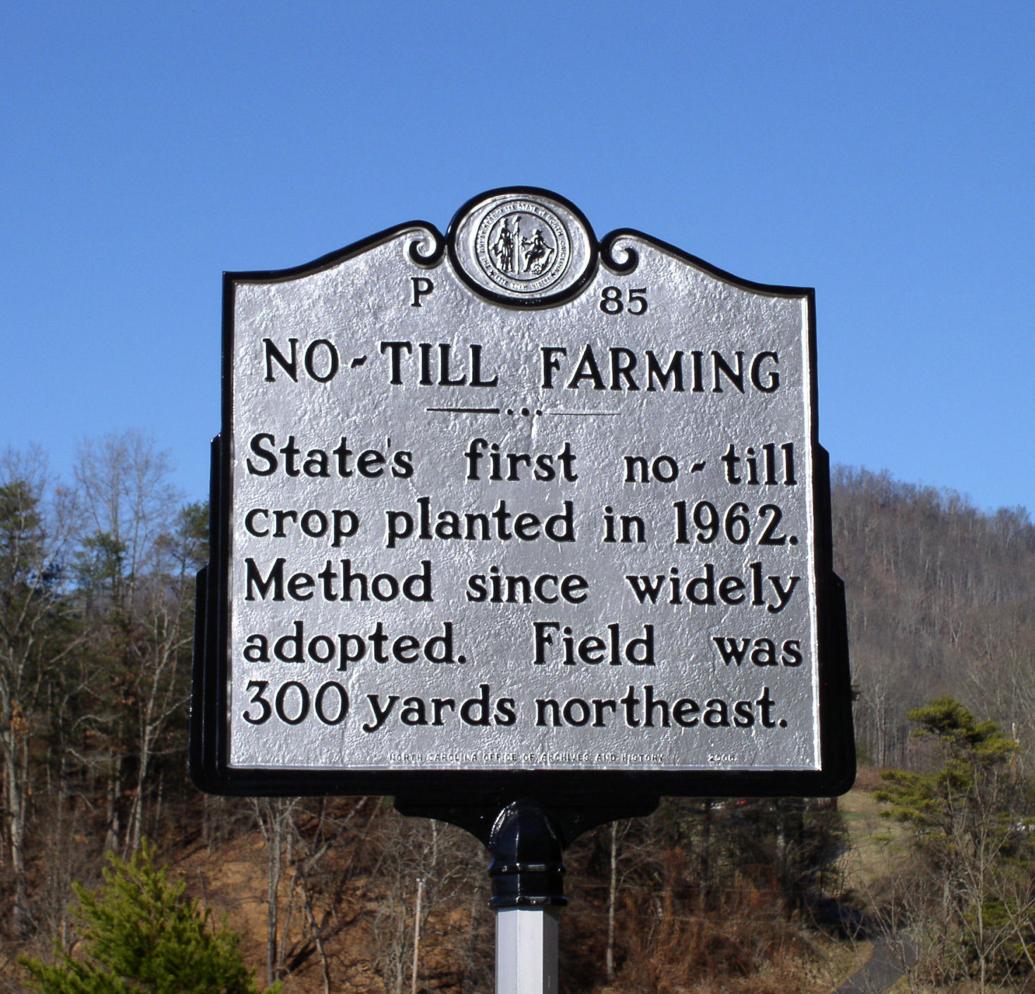 The Haywood Soil and Water Conservation District erected this sign near Kirkpatrick's North Carolina field in 2005.

The no-till history research this year -- celebrating 60 years of the commercial practice -- turned up several new discoveries. Last fall, we came across what some believe to be the first no-till planter. We were aware of the unit, but its name had escaped us in other coverage. A chance discovery on an industry message board led to a No-Till Farmer feature article on the McCormick Till Planter. For more information see The No-Till Planter Race: Did IH Get There Before A-C?

Another discovery emerged after research showed North Carolina’s claim to no-till fame. While Harry Young of Herndon, Ky., is widely credited to be the first to no-till commercial farmland in 1962, another farmer (John “Doc” Kirkpatrick, Jr.), two states away in North Carolina, also no-tilled that same year. Like the Youngs’, his land is staked with state historical marker. But unlike the Young historical marker that was unveiled in 1984, the North Carolina version didn’t go up until 2005.

Yet since Crabtree, North Carolina is about 90 miles closer to the equator, it’s possible to imagine that the North Carolina crop may have gone in first.

The Youngs certainly attracted the attention of agriculture. Harry put his no-till ground on exhibit for everyone to see, whether it would work, or would not. And he welcomed everyone to see it. Over the first 22 years, 11,000 converged on tiny Herndon, Ky., to see the maverick no-till practice.

The best coverage found on Kirkpatrick was a 2017 article ("The No-Till Farmer" in The Mountaineer) by Gail Healthman, the now-retired education coordinator of the Haywood Soil and Water Conservation District. She described John “Doc” Kirkpatrick as World War II pilot and aeronautical engineer who settled down in 1947 to be a dairyman and row-crow farmer. Aware of the Young’s effort in Western Kentucky in 1962, she wrote that Kirkpatrick planted a no-till corn crop that same year into his fescue sod.

Her coverage also noted that he built and got 2 patents on a “machine that enabled him to plant corn in sod by disturbing only a few inches of soil.” Several patents were found in his name.

“While farmers routinely deal with any number of issues, farming in the mountains offers its own challenge in the form of erosion,” Heathman wrote. “The unwelcome sight of his soil eroding demanded action on Kirkpatrick’s part.

“One has to wonder if some of Kirkpatrick’s fellow farmers scratched their heads at his radical change in growing crops. After all, only shiftless individuals failed to plow their fields, right?”

Kirkpatrick’s farm later appeared on the cover of the Progressive Farmer magazine’s September 1967 issue, and several articles were published about his success in the hope that other farmers would give no-till farming a try.

John “Doc” Kirkpatrick Jr., pictured, combined his education and concern for soil erosion to no-till his corn into fescue sod in 1962. Source: The Mountaineer

The text accompanying the North Carolina Highway Historical Marketer Program cites the Young Farm in Kentucky but points out Kirkpatrick’s pioneering efforts that same year. “[Kirkpatrick] planted his corn into old fescue sod, building and patenting a ‘machine that enabled him to plant corn in sod by disturbing only a few inches of soil.’ With rows of corn surrounded by grass ranging up to 3 feet tall, it is not surprising that people were skeptical of Kirkpatrick’s plan.

“A report in 1964 indicated that ‘many individuals and groups came from several states to observe this corn and his method for producing such a high yield.’ Kirkpatrick obtained a good harvest from the sod-planted corn, proving that the method was viable. At least four men who visited his farm began to plant no-till crops the next year.

“An article about no-till farming in the June 1972 issue of The Progressive Farmer gives a nod to Kentucky, Virginia, and North Carolina as the states where the technique was pioneered.”

Kirkpatrick died in 2007 at the age of 90 but had been able to “see his farming method go from laughingstock to standard practice,” as reported in the Historical Marker text. In 2017, he was posthumously inducted into the National Association of Conservation Districts Southeast Region Hall of Fame.

Regardless of whether Young or Kirkpatrick got their no-tilled corn in first, it’s clear that neither hid their light under a bushel basket. Although it took place to varying degrees, curious neighbors checking out to see what was happening moved the practice forward, even if one farmer at a time.

The 1969 No-Till Farmer Tillage Practice Survey, Kentucky and North Carolina were number 1 and 2 in no-till acres, at 150,000 and 30,000 acres respectively. The path to an estimated 110 million acres today can be traced to these farmers braving the unknown in the spring of 1962.