NEW ORLEANS — Speaking to his first “really large” crowd since taking the job of Secretary of Agriculture, Tom Vilsack made a flurry of announcements to farmers and agribusiness representatives.

Vilsack took the job of agriculture secretary in February 2021, as pandemic precautions were in place across the country.

His in-person speech came as the USDA announced $250 million in funding for domestic fertilizer sources.

“I think it’s fair to say that you all are suffering from serious issues with reference to fertilize costs,” Vilsack says.

The program is designed to bolster long-term options for the restructuring of the fertilizer market, Vilsack says.

"We are announcing an effort to jumpstart independent production of fertilizers made in America, with innovation, utilizing, impacting and assisting active farming operations," he says. 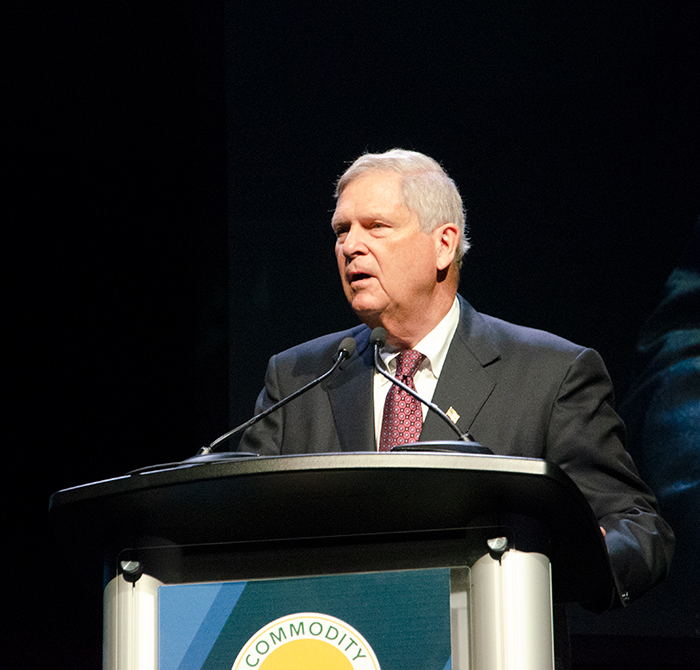 The evaluation "is just an effort to make sure that these relationships fairly and equitably distribute the wealth that's created by the work that's done to get food from your farm to my table," he says.

Vilsack drew the most applause when he mentioned renewable fuel as one solution to climate change.

The agency also evaluated short- and medium-term options to assist in market restructuring for fertilizer.

“Immediately, you all have choices in terms of what you can do: what you raise, what you produce, what you plant, based on how we pencil out the cost,” he says.

The attorneys general “are asking a series of questions of the fertilizer market – I think they’re legitimate questions – as to whether or not all of the increase we’ve experienced in this country is tied to supply chain disruptions or the situation in Ukraine,” Vilsack says.

For example, Vilsack says he was talking to representatives from the industry and one representative told him they were raising prices to cover those prices “and then some.”

“And then some?” he says. “What is that all about? What do you mean by that? There shouldn’t be any ‘and then some’ in the circumstances we face today.”

Some of the news was updates to previously announced programs, like $1 billion in grant funding from the Commodity Credit Corporation funding for novel conservation agriculture programs. Vilsack told attendees that deadlines to apply for the funding have been extended. The original deadline was in early April. Officials have now extended the deadline to May 6. A funding project for smaller-scale projects has been extended from May 26 to June 10. Among the eligible programs are no-till.

The funding initiative was driven in part by farmer feedback, Vilsack says.

“You said, ‘Start with pilot projects, start with a series of projects, start with large-scale demonstration projects that allow farmers of all sizes and all geographies and all commodities to participate’” Vilsack says. “’Allow them to aggregate their activities. Provide resources for them to embrace climate smart agriculture practices, which they may already be doing. Don’t penalize the early adapters.’”

The extensions were driven by popular demand, Vilsack says.

“There’s so much interest in this program that we received a number of requests from groups around the country … and these may be projects that are involving hundreds of millions of dollars,” he says. “They said ‘Give us a little more time, because we’re working on some really great ideas.’”

The funding is intended to jump-start conservation agriculture, Vilsack said.