The number of no-till acres worldwide has increased by 93% in 10 years, bringing the total number to 507.6 million acres.

Amir Kassam, a professor at the University of Reading in England; Theodor Friedrich, a retired researcher with the Food and Agriculture Organization of the United Nations; and Rolf Derpsch, a long-time no-till researcher based in South America, recently authored a paper examining the adoption of no-till worldwide over the 10-year period of 2008-09 through 2018-19.

They found that the number of no-till acres increased by 244.4 million acres worldwide to a total of 507.6 million acres. Those acres are almost equally split between the northern and southern halves of the globe.

Cropland using conservation agriculture, the term used for no-tillage outside of North America, makes up about 14.7% of the total global cropland, according to the study. Adoption is growing by about 25 million acres per year, and Derpsch believes all farmland needs to be conservation cropland in order for society to continue to exist. 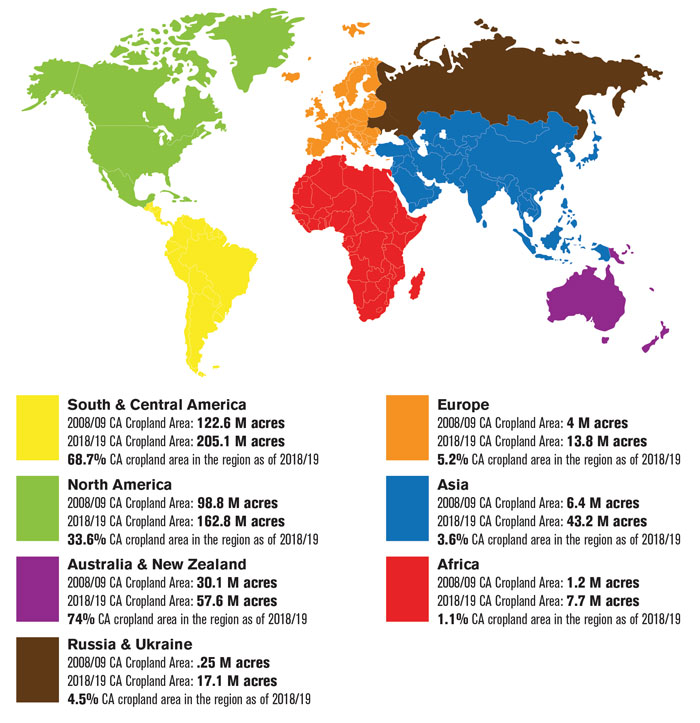 “We cannot afford to lose more soil than what we have lost already,” Derpsch says. “All around the world, climate change is causing soil erosion, and in some extreme cases, hundreds of tons of soil are lost every year ... We have too many cases where civilizations have disappeared because they did not pay attention to erosion.”

Derpsch has seen the positive impacts of widespread adoption of no-till farming firsthand. This South American no-till pioneer was one of the first people to research no-till in Brazil and Latin America starting in 1971.

“It was incredible how fast [no till] grew in Brazil,” Derpsch said. “Erosion impacted practically all of the soils, and [there were] several million hectares where the soil was bleeding away. Farmers, when no-till appeared, very quickly decided not only to try it, but seeing the efficiency in reducing erosion, stayed in the system and developed it further.”

Derpsch attended the first no-tillage conference in the U.S. in 1973. That same year, he also visited Harry Young and Shirley Phillips in Kentucky and Lloyd Harrold, a leading no-till researcher at the time, in Coshocton, Ohio. Being multilingual, Derpsch was able to convey the information he learned beyond English-speaking audiences. However, he credits farmers with driving the adoption of no-till across the world.

“Farmers capture the idea much quicker,” Derpsch says. “Researchers learn very slowly. And despite [researchers] having the notoriety and the practical experience to explain that it works well, farmers have to see it on their own fields.”

He continued to share his expertise around the world as part of the German Agency for Technical Cooperation (now GIZ), where he worked for 35 years, and as a no-till consultant starting in 2001. His research and extension work has taken him mainly to Paraguay, Brazil, Argentina, Bolivia, Chile, Honduras, Colombia, Cuba, Somalia and Germany.

Conservation Tillage A Worldwide Thing: Growers on three continents compare notes on their challenges, methods and equipment for best results.

Teaching the World to Save the Soil: Five educators discuss the past, present and future of sharing no-till knowledge with farmers.

Using Crimson Clover as a Cover Crop: The Cornell Conservation Agriculture Group recently shared summaries of several conservation agriculture studies overseas that show these principles can be put to work anywhere in the world and be successful.

Which Countries Have the Most No-Till Acres?