Gene Identified that Regulates the Angle of Root Growth in Corn

The discovery of a gene that regulates the angle of root growth in corn is a new tool to enable the breeding of deeper-rooting crops with enhanced ability to take up nitrogen, according to an international team of researchers, led by Penn State. 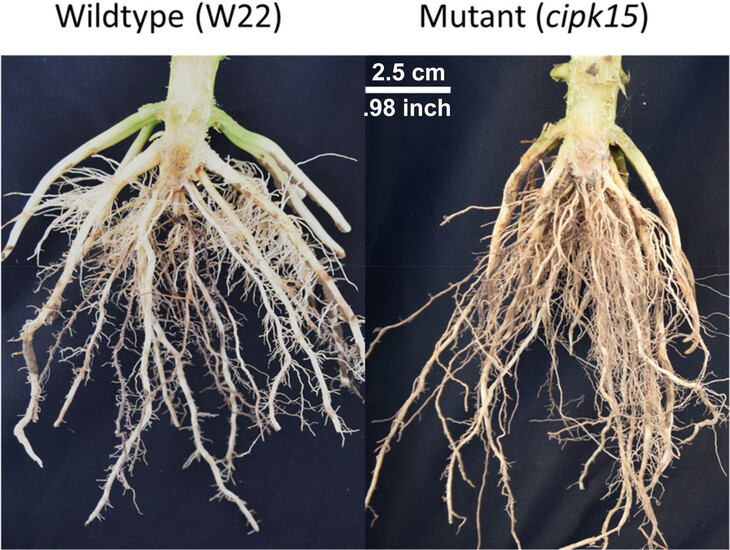 SEEKING NUTRIENTS. These images of root architecture in the field show the cipk15 mutant corn genotype had significantly steeper angles compared to the wildtype genotype. Plants were grown in low nitrogen conditions. The mutant corn line that produced the root on the right lacks a gene that regulates root growth. IMAGE: HANNAH SCHNEIDER/PENN STATE

The gene, called ZmCIPK15 — a moniker indicating where it is located in the genome and how it functions — was found to be missing in a naturally occurring mutant corn line that grows roots at steeper angles that make them go deeper into the soil. They identified the gene using a technique called a genome-wide association study, which involves a painstaking statistical analysis of a genome-wide set of genetic variants in different plant lines to see what genes are associated with a trait.

Identifying a gene that controls the angle of root growth in corn — influencing the depth to which roots forage — is important because deeper roots have a greater ability to capture nitrogen, according to research team leader Jonathan Lynch, distinguished professor of plant science in Penn State's College of Agricultural Sciences. Corn with an enhanced ability to take up nitrogen has implications for the world’s environment, economy and food security, he noted.

“Corn is the most important crop in the world. In rich countries like the U.S., the biggest energy, economic and environmental cost of growing corn is nitrogen fertilizer,” Lynch said. “And more than half of the nitrogen fertilizer applied to corn is never even taken up. It's just wasted — washed deeper into the soil where it pollutes groundwater, and some of it goes into the atmosphere as the greenhouse gas, nitrous oxide. It's a massive problem.”

In contrast, in regions like Africa where people are more dependent on corn for food, soils are nitrogen deficient and farmers can’t afford to buy fertilizer, if it even is available, Lynch added. Corn yields in Africa are just a fraction of what they are in the U.S. Deeper-rooting corn would help poor countries harvest more food with the limited amount of nitrogen that they have. 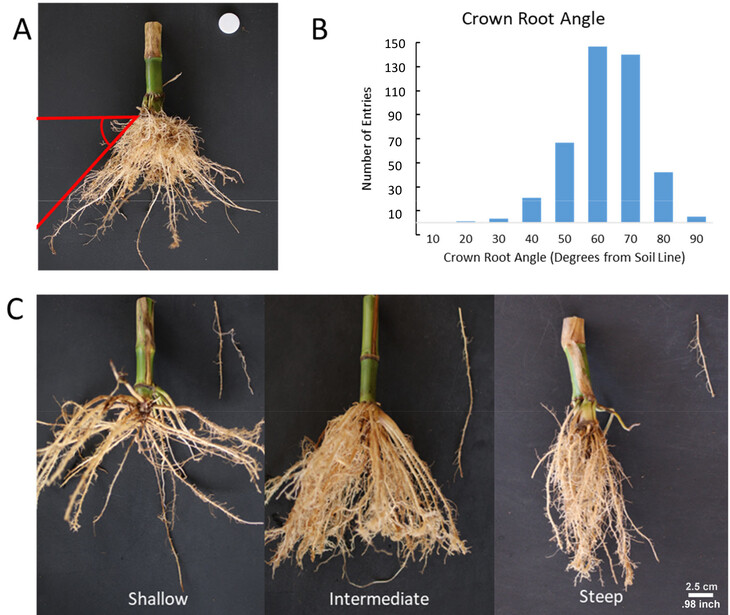 To find the gene regulating the angle of roots, researchers at Penn State screened nearly 500 lines of corn over four years in South Africa. Field experiments at Penn State’s Russell E. Larson Agricultural Research Center and greenhouse experiments at the University Park campus were conducted to confirm the phenotype of the mutant and wild-type plants and to test the functional utility of changes in root angle for nitrogen capture.

Roots of selected plants were excavated and measured, validating the functional importance of the ZmCIPK15 gene. It caused an approximate 10-degree change in root angle, noted Hannah Schneider, former postdoctoral scholar in the Lynch lab, now a faculty member at Wageningen University in the Netherlands, who spearheaded the research.

“Along with enhanced deep nitrogen acquisition, we expected to see that the steeper growth angle of cipk15 mutants’ roots would result in better performance in drought, but in our experiments, it did not translate to improved plant water status,” she said. “However, that only may be because we have difficulty simulating drought conditions in Pennsylvania.”

Microbes that Can Reduce Drought Stress in Sorghum Identified