Sponsored by AgroLiquid and No-Till Farmer, below is a synopsis of each farmer’s fertilizer program.

For Elizabethtown, Pa., farmer Jim Hershey, no-till farming has been a way of life for more than 30 years. While the conversion to no-till wasn’t initially conservation focused, Hershey says the many benefits of no-till farming have become clear.

“The main reason I started no-till farming was time. My wife and I were running the farming operation by ourselves and we also had a dairy operation. Time was very valuable,” Hershey says.

Today, the 600-acre multi-generational operation is no longer a dairy but grows corn, wheat and soybeans and finishes 1.7 million organic broiler chickens along with 6,500 head of hogs.

Planting Green. The 3-year corn, soybean and wheat rotation Hershey follows involves no-tilling the crops into a green 6- or 7-way mix of cereals, brassicas and legumes, which is planted no later than October.

“We’ve been cover cropping extensively for over 15 years and have seen an improved soil profile with water infiltration rates of approximately 2 inches per hour,” he says.

Hershey says heavy biomass has been key to his success with planting green. “When I say that we’re planting green, I’m not talking about 8-10 inches of cover crop with a burndown,” he says. “We have a Dawn ZRX roller mounted on our corn planter — I like to tell people that the more biomass we have in a field at planting time, the happier I am,” Hershey says, adding that planting both corn and soybeans into heavy biomass makes for more resilient crops.

“We can meet most of our nutrient needs with the hog manure...” — Jim Hershey

“We saw better crop performance in our soybeans than our neighbors did in 2020 when it was extremely dry. We didn’t see crop stress like others in our area did,” he says. 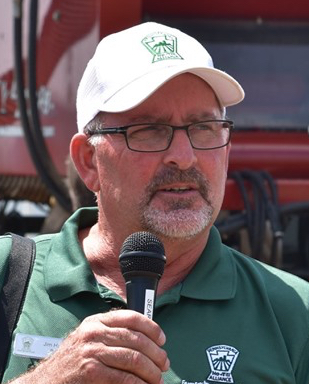 Fertilizer Management. To manage the waste from the animals the operation feeds and finishes, Hershey institutes a nutrient management plan on their crop acres.

“Because we are considered a Confined Animal Feeding Operation (CAFO), we must adhere to Pennsylvania’s ACT 38 Nutrient Management Plan requirements,” he says. “Manure applications are based on phosphorus (P) levels in the soil, and because poultry manure is high in P, we export all broiler manure. We can meet most of our nutrient needs with the hog manure.”

Through the use of cover crops and no-till practices, commercial fertilizers has also been greatly reduced.

Today, depending on the weather, Hershey applies hog manure to the living crop in either spring or fall, applying between 2,500 and 9,000 gallons per acre to supply around 100 pounds of nitrogen (N) per acre. He also applies a 6-24-6 starter in-furrow at a rate of 5 gallons per acre with an additional 40 units of 28% UAN dribbled on top of the furrow with the planter. He uses a Pre-Sidedress Soil Nitrate Test (PSNT) to establish a base rate for sidedressed N application. Other macro and micronutrients are also applied judiciously and based on soil test results.

“Our soils are working the way they should,” Hershey says. “We are managing manure more efficiently, and we have seen our P levels decreasing every year. Our present P level is approximately 300 ppm, and we have seen that level slowly drop. Our target is 100 ppm.” 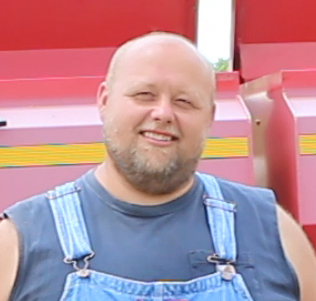 Joshua Hiemstra of Hiemstra Dairy began no-tilling as an opportunity to manage the manure generated by his livestock.

“We’re in the Rock River Watershed, and we’re required to meet nutrient management standards on 5-acre grids, but we’ve been able to lower it to 2½-acre grids,” Hiemstra says. “No-till and cover crops make it a lot easier to manage manure. Our goal is to get manure on every acre every year, rather than spotting it in.”

A Different Approach. The 790-acre operation doesn’t utilize a set crop rotation but does rely heavily on silage and high-quality legumes, with 3 out of 4 acres of corn devoted to silage. Following corn, the acres are rotated to soybeans and followed by winter wheat, with a portion of acres planted to alfalfa.

“We plant alfalfa with the expectation of a 3-year stand. For a nurse crop, we plant peas and triticale at a rate of 65 pounds per acre with a couple of pounds of timothy and rye grass. We mix that with 150 pounds of gypsum and 200 pounds of potash, all mixed and airflowed on,” says Hiemstra.

“Normally, with spring manure applied pre-planting, we don’t need any more nitrogen. On fields with fall-applied manure, we usually need to apply an additional 15 gallons of High NRG-N or 75 pounds of nitrogen. We then use stalk nitrate tests to evaluate nitrogen during the season,” he says.

Hiemstra says he began monitoring high salt fertilizer use several years ago when the dairy was experiencing reproductive issues in the cow herd. He learned that the issues were a result of high chloride levels in the forage.

“Once we learned where our issues were coming from, we limited potash to one application in the spring, and in the summer we switched to foliar feeding the alfalfa,” he says.

Alfalfa foliar applications are applied after the second cutting and consist of 2 gallons each of Pro-Germinator (9-24-3) and Sure-K (2-1-6), along with liquid boron.

Growing Cover Crops. Hiemstra has now been using cover crops for more than 10 years, and says that his initial endeavor included planting a monoculture cover crop of rye for the express purpose of generating more forage for the dairy. When he learned that mixes were able to hold more manure, he incorporated radishes, brassicas, legumes and grasses.

“The first thing we noticed after planting the mixes was just how mellow the soil was and how many nutrients were sequestered and produced,” he says. “It used to be that after wheat, the following year’s corn was my worst corn. Now it’s the best corn I grow and I only need a starter.

“I’m achieving this by following wheat with a diverse cover crop mix in the fall and figure nitrogen at 75 pounds of manure plus 35 pounds applied at planting for a total of 110 pounds of nitrogen needed to get my 275 bushel yield. So if you figure 110 divided by 275, you get 0.4, which means that the soil is providing the rest, or 0.6 x 275 — 165 pounds of nitrogen — while holding that 75 pounds for essentially 10 months. For perspective, we used to apply 1 pound of nitrogen for every bushel.” 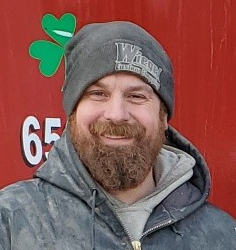 Wiegel Riverside Dairy, the 650-acre operation that Jason Wiegel operates with his dad, Jack, and uncle, Larry, is home to 220 head of milking cows, along with about 200-220 replacement heifers and a feedlot where steers are finished. The cumulative manure is both a resource and a burden that Wiegel works to manage year-round.

“We surface-apply all of our manure. Instead of spreading it only on the silage ground at a heavy rate, like we used to, we work on covering all 650 acres at a lower rate of about 5,000-8,000 gallons per acre,” Wiegel says. “And we always apply it on a living crop, whether that be alfalfa or a rye cover crop, always into green.”

Adding Practices. Wiegel eased into adopting covers in 2008, seeding a small number of acres and gradually increased their use until he was using them on 100% of his acres in 2013.

Wiegel says that he tries to no-till a five-way mix of wheat, rye, clover, radish and turnips into corn silage acres in late August through early September. However, if he hasn’t seeded the cover crop by September 10, he will plant straight rye instead.

“Keeping everything covered and something growing all the time keeps nutrients cycling, holds the manure we apply and prevents erosion.”

“We take four aggressive cuttings of alfalfa a year and a fair amount of corn silage — we’re removing a lot of nutrients,” he says, adding that the vast majority of acres in the area are deficient in K.

“If we put out just what the plant needs, there’s nothing left for the soil. It takes a tremendous amount of potash in our area to build levels and maintain soil health,” he says.

Today, Wiegel applies 500 pounds of potash annually on his hay acres. The application is split-applied at a rate of 250 pounds after the first crop, with the remainder applied after the fourth crop.

“We were getting a little too much potassium and salt coming through in the feed for the cows. When we apply the majority after the fourth cutting, we have 7-8 months for those nutrients to cycle and breakdown so they aren’t carried into the feed as much,” he says.

Nutrient Awareness. Nitrogen (N) is also a consideration Wiegel monitors closely in the manure being applied from the dairy. The operation adds an N stabilizer and odor reducer to manure pits, and periodically pulls a manure sample to learn how many N credits per thousand gallons are available.

N supplied by the manure is supplemented with either urea or ammonium sulfate (AMS) to compensate for any N deficits. Applying a total of 200 units of N between the manure and the synthetics, Wiegel applies half of the supplement as AMS pre-plant and sidedresses the other half as urea at V5. The urea is mixed with Agrotain to protect against leaching or loss and broadcast applied along with micronutrients.

“Whether we are spreading on corn silage or hay, we always apply about 5-10 pounds of boron, as well as about 5 pounds of zinc and some manganese as needed,” Wiegel says, adding that the operation has also found value in applying gypsum.

“We’ve been using gypsum for about the last 12 years. It’s very cost effective for us and we apply 500-1,000 pounds every year on our hay ground to meet the calcium demands of alfalfa,” he says.

To get more details about these farmers’ fertility management programs and farming operations, click the button below. Also visit the Responsible Nutrient Management Practitioners page for further reading.

Read more on the fertility practices of the three winners >>