Home / Blogs / Covering No-Till / 'Why Will it Matter You Farmed the Land?'

'Why Will it Matter You Farmed the Land?'

By John Dobberstein posted on June 27, 2019 | Posted in Soil Health

Nathan Anderson was once asked this question: “Ten years after you die, why will it matter that you farmed that land? Who will know, and who will care?”

The Aurelia, Iowa no-tiller and board member for the Practical Farmers of Iowa admits to spending some time thinking about a response. He’s spent the last several years implementing no-till practices and cover crops at Bobolink Family Farm, where his family raises corn, soybeans and cattle.

“Each one of us who is fortunate enough to farm, own or manage land leaves their own imprint on it,” Anderson told members of the U.S. House Agriculture Committee during a hearing Tuesday on Capitol Hill. “It can be negative, neutral or positive, and it can be seen for generations.”

Just as the public can see soil-based evidence of manure applications, tillage, fence lines and travel paths made by farmers decades ago, farmers decades from now will see the imprint of those farming the land now, he added.

“For the future of food security, rural communities and family farms, that imprint must be positive and enduring,” he says. “The broad application of basic soil health principles is capable of having that impact.”

Anderson and several other farmers and stakeholders in conservation agriculture discussed with lawmakers the need for the government to support programs that improve soil health practices. U.S. Rep. Abigail Spanberger highlighted a recent report by Sustainable Agriculture Research and Education (SARE) that addresses the economic returns that can be expected from seeding cover crops on farms. 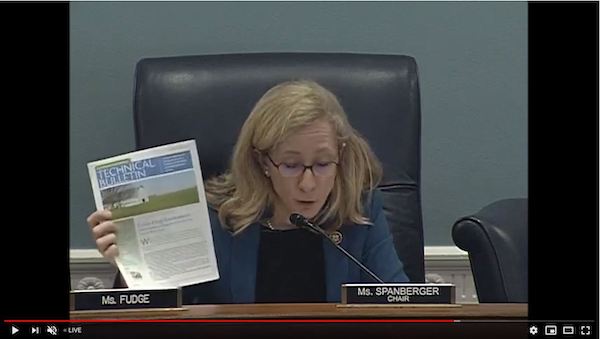 DO THE MATH. U.S. Rep. Abigail Spanberger, a member of the House Agriculture Committee, holds up a report by Sustainable Agriculture Research and Education (SARE) about the payoffs to be expected from seeding cover crops on farms.

Dr. Shefali Mehta, executive director of the Soil Health Partnership, says the organization has partnered with 220 farmers in 15 states to work with field managers to measure the impact of conservation practices on farms.

SHP, created in 2014, has assembled a data set to support farm decision making and analyze the impact of conservation practices on soil health, yields, inputs and the bottom line of farm operations. They’re also assessing near-term risk on adoption vs. long-term risk reduction that comes from increasing resiliency of farm ground.

Since the project began, Mehta says the member farms who’ve introduced soil-saving conservation practices such as reduced tillage and cover crops have reported an increase in soil organic matter of 0.33% to 0.50%, and there’s been reduced farm runoff and erosion, more resilient crops during weather extremes and increased carbon sequestration. She notes there are financial challenges in getting the practices adopted and geographies, soil types and weather create the need for unique tools for different farmers.

And last fall during heavy rains that delayed harvest for most farmers, Cunningham recalls harvesting his crops on time due to better soil structure, while neighbors were fighting the mud and tearing up their fields and machinery.

“My crop insurance agent asked me last November if I would be filing a claim and I said I wouldn’t be because my yields were higher than the insurance guarantee,” says Cunningham, who serves as secretary and treasurer for the National Assn. of Conservation Districts. “He said it was the first time he’d heard that from one of his customers.”

Anderson says he and his father started using “Brains of the Day” and “Brawn of the Day” awards to affirm each other’s work and contributions on the farm. During a devastating rain event, he recalls there being water coming across from a neighbor’s field with enough force he could have taken a kayak across it.

“When that water entered our no-till, cover-cropped field, the moving water slowed, dropped its load of sediment and infiltrated,” he says. “Dad looked out the window in the pouring rain at the disappearing stream of water and said matter-of-factly, “‘Maybe the Brains of the Year Award.’”

‘We Treat it Like Dirt’: Desertification on the March in Europe?

Keeping the Soil Where it Belongs