The latest salvo over the future viability of the Ogallala aquifer was fired earlier this month when the University of Kansas released a report that confirms what’s at stake for western Kansas farmers if water levels fall too low to support irrigation.

The University of Kansas study provides an assessment of the aquifer’s condition and highlights areas most at risk in the state of Kansas. It also advances a “water-balance approach” developed at the KGS for estimating how far pumping would have to be cut back to extend the life of endangered sections of the aquifer. 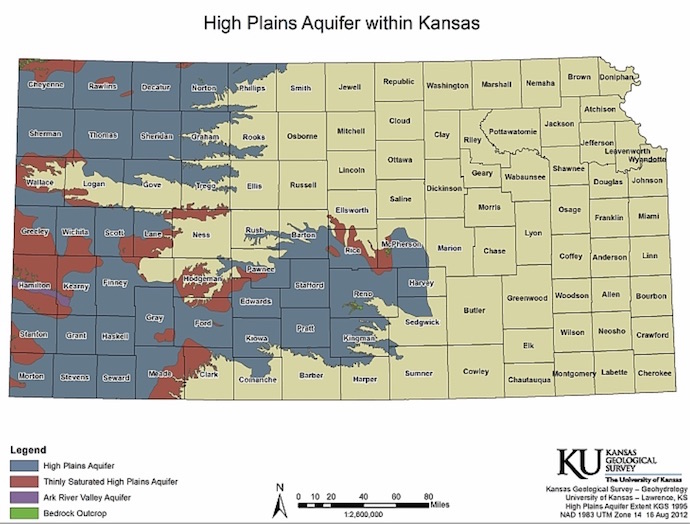 The study says groundwater levels could be sustained in most of the imperiled areas of western Kansas for at least one to two decades by reducing pumping 27-33%.

The university says that’s higher than the 20% reductions economic analyses indicate can be made without substantially affecting farming operations. But it’s significantly lower than those forecast using standard numerical models, the university says.

Data and analyses in the report are provided for each of the state’s five Groundwater Management Districts, which fall within the High Plains aquifer boundaries and are organized and governed by area landowners and local water users to address water-resource issues.

The KGS amasses water-level data from about 1,400 wells measured annually by the KGS and state of Kansas. Water use for each well with a water right is reported to the Kansas Department of Agriculture by the water-right holders.

“The data we collect allow us to define the water-resource conditions and issues and to evaluate progress toward achieving goals laid out in the state’s Long-Term Vision for the Future of Water Supply in Kansas report,” Whittemore says.

The state’s water vision plan, released in 2015, was drawn up to ensure a continuing reliable water supply in the state. It provides a framework for protecting and managing the state’s water resources — aquifers, streams and lakes — in collaboration with water stakeholders.

The KGS water-balance approach is being used to estimate how much pumping has to be diminished in different parts of the aquifer to achieve a zero water-level change. Calculations made with this method show that reductions may not have to be as drastic as originally thought.

If this turns out to be true, that’s great. But the big problem we have now is convincing some growers that pumping reductions are needed at all. Yes, dryland farming conversion may increase and I’m concerned many farmers aren’t prepared for that.

These discussions about modeling are important, don’t get me wrong. Buys once we get past 10-20 years, what will irrigation resources look like for the next generation?

I feel we need to put more resources into programs that will incentivize growers to adopt no-till and cover crop practices and precision irrigation technology as a way to improve irrigation efficiency and also make dryland farming more resilient if the aquifer becomes unusable.

It's Time To Stand Up

Take Time to Recognize the Best Among Us