It’s a demonstration that Steve Alspach has done dozens of times. But the results always seem convincing.

The soil scientist for Oklahoma’s NRCS office lined up five aluminum pans of no-tilled and conventionally tilled soils with varying levels of cover or no cover, side by side. Then an oscillating sprinkler soaked the soils with the equivalent of a 1.5-inch rain. Clear glass jugs below the pans collected both the runoff and infiltration water.

The jug below the clean-tilled soil, taken from a field with continuous cotton production, filled up with muddy, orange-colored water. In stark contrast, the runoff from no-tilled soils covered with native vegetation was nearly clear.

“Which water would you rather take a drink from?” Alspach asked more than 50 farmers attending the No-Till on the Plains Whirlwind Expo in Apache, Okla., last week.

Cropping prospects in the southern Plains are looking much better because of the rainstorms last May that broke a prolonged drought. The field day’s host, veteran no-tiller Alan Mindemann, noted that he was able to plant corn last spring for the first time in several years.

But there are still millions of acres across the region damaged by centuries of tillage and wheat monoculture. Alspach noted that many farmers in Oklahoma once deemed tillage as necessary to “prepare a field to take a rain,” but that simply created a surface crust that kept most of the rainwater from infiltrating the soil.

After this demonstration was over, he took the aluminum pan with clean-tilled soil, dumped it upside down onto a plastic tarp, and noted the bottom of the pan was dry, meaning little or no moisture filtered through the soil. 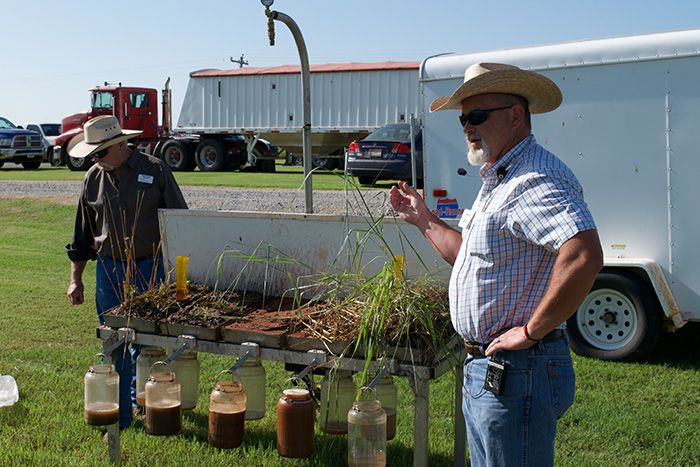 Steve Alspach (right), soil scientist for the Oklahoma NRCS, and soil scientist Greg Scott from Tyron, Okla., discuss the results of a rainfall simulator at the recent No-Till on the Plains Whirlwind Expo near Apache, Okla. At far right, untilled soil with native vegetation had the cleanest runoff and highest water infiltration (seen in rear jugs), while at center, soil from tilled cotton fields had the most runoff and far less infiltration.

So now with some moisture to work with, how can soils in the southern Plains —once known as thriving, diverse prairies — be healed up again? Here are five principles Alspach suggests.

1) Keep the Soil Covered. Keep residue on the soil surface as much as possible to protect soils from the impact of raindrops, wind, or intense heat, such as was seen at last week’s field day when temperatures skyrocketed to 100 F. Soil temperatures were likely 120 to 130 F.

“At that temperature you’re not saving water. Evaporation is right at 100% and anything you’re trying to grow out there isn’t going to survive,” Alspach says. “We’ve got to get water in the ground and keep it there, so we can use it for our cash crops.”

2) Don’t Disturb the Soil. Beneficial fungi are always present in healthy soils, but are destroyed with tillage. “When we look at fungal populations in tilled soils, the numbers are usually pretty low,” Alspach says. “If we can stop disturbing the soil, we can rebuild fungal populations and bring our soil biological community back in equilibrium with our climate.”

He also notes that soil running off the farm has a price. It’s common for soils in parts of Oklahoma to have 0.5% or less organic matter, down from 2-3% that existed thousands of years ago with native prairies, Alspach says. Each 1% decline in organic matter in the top 6 inches of soil means a loss of 1,600-1,800 pounds per acre of nitrogen that is lost.

“Not all of that nitrogen is available, but a percentage of it becomes available through soil biological activity,” Alspach says. “If we can just bring the organic matter in our soils up 1-2%, we’d have much better nutrient-cycling and water-holding capacity.”

3) Feed Soil Biology. Many growers in the southern Plains are leaving fields fallow for 2-4 months or even longer, which means soil organisms don’t have enough food to sustain themselves when crops are being raised, Alspach says.

“When roots are green and growing, harvesting sunlight and making sugars,” he says, “they give off 40% of that sugar to attract and feed soil biology that is beneficial to them. It’s biology that helps to take up nutrients.”

4) Mimic Mother Nature. Planting a monoculture of wheat year after year just feeds soil organisms that consume wheat stubble, but not other organisms that could be beneficial to crops, Alspach says.

Rotating away from just wheat, or seeding cover crops, is a way to get back to a system that more closely resembles natural processes, Alspach says.

“In the last 10-12 years, we’ve discovered if we have a grass and legumes growing together, and we have beneficial fungi in the soil as well, the fungi will inhabit the roots of both of those and help them trade nutrients,” Alspach says. “Legumes pull nitrogen from atmosphere, and grasses are good at pulling phosphorus out of soil. And fungi benefit because both plants are feeding it sugar. We can see a little bump in forage production in that situation.”

5) Consider Livestock. The standard method for grazing throughout the Great Plains and much of the U.S., Alspach says, is allowing a certain number of cattle on acreage, leaving the gates open and letting them eat what they choose. But he’d like to see growers move toward some type of rotational grazing.

“Before we had cattle, sheep and other grazers on this land, bison were the dominant ones and they were a pack animal. They would move in large herds, hit an area, graze for a day or two and move on, and maybe not come back to that spot for 1-2 years,” Alspach says. “Perhaps we can incorporate the same management — maybe not moving cattle every day, but more often than we are now. Giving the pasture time to recover is a big part of that.”

10 Tips for Successful No-Till Production: No. 4 and 5