Interseeding Camelina and Rye Into Soybean at R6 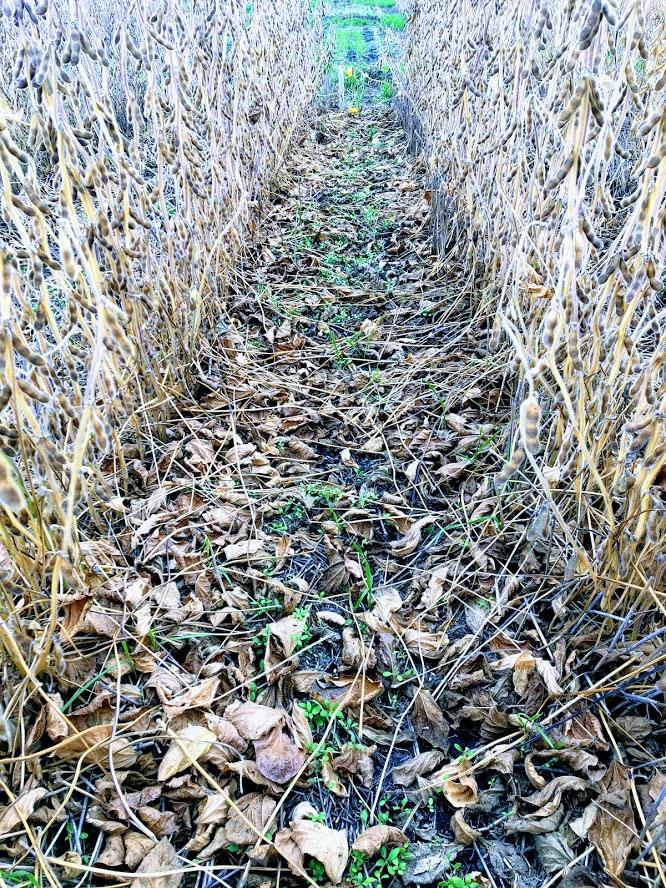 Interseeding cover crops into soybean is not a common practice in North Dakota due to limited soil water, a short growing season, and the need for adapted winter hardy species to produce a good established stand of a cover crop. A study evaluated the impact of interseeded winter camelina and winter rye using two soybean varieties with different relative maturities (0.5 and 0.9) and row spacing (12 and 24 inch). The winter rye variety ‘Rymin’ was seeded at a rate of 60 pounds per acre. The winter camelina variety ‘Joelle’ was seeded at a rate of 9 pounds per acre. Cover crops were seeded when the soybean reached the R6 growth stage. Canopy coverage, defined as a percentage of green plant matter, which covers the soil, was measured using the mobile phone application called Canopeo. The earlier maturating soybean variety (0.5 vs 0.9) produced more cover crop biomass (dry matter) 172 vs 105 lb. per acre in the fall and 203 vs 161 lb. per acre in the spring. Cereal rye outperformed winter camelina with 231 vs 129 lb. per acre in spring dry matter production. Row spacing did not influence cover crop growth, yet narrow row spacing produced higher soybean yield (Table 1).

Cover crops were chemically terminated just before spring wheat seeding. Seeding spring wheat is not recommended following the interseeding of cereal rye in soybean as found in our results in Table 2. Results may be different when rye is terminated at a different time. There was no negative effect from winter camelina on the wheat yield (Table 2).

†Within a column, mean followed by a different letter are significantly different at p≤0.05.

† Within a column, mean followed by a different letter are significantly different at p≤0.05. 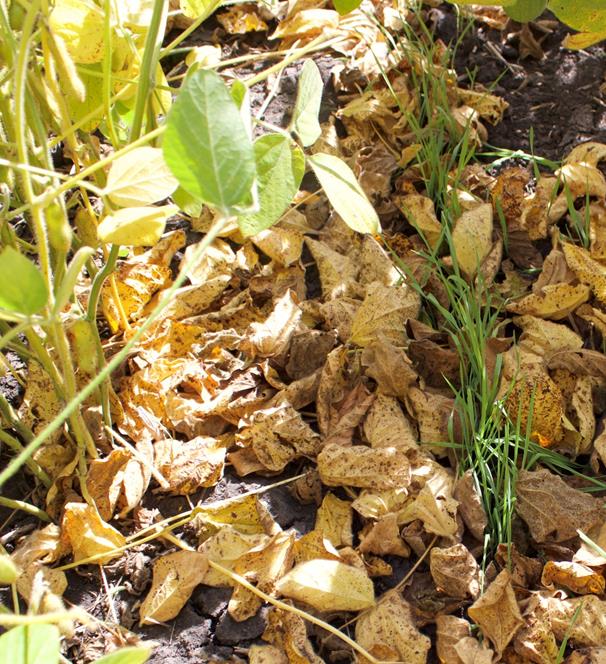 When seeding cover crops into early-maturing soybean varieties, cover crops will produce increased cover crop growth resulting in increased biomass and canopy coverage, compared to when seeding into a later maturing soybean variety. However, the opportunity cost of planting an earlier maturing variety is larger due to the loss of soybean yield compared with a later maturing variety. Based on this study, it is not recommended to plant an early-maturing variety for your growing area, but use your normal maturity variety, as the loss of revenue does not seem to be compensated by an increase in cover crop biomass. No soybean yield reduction was found after the interseeding of the cover crops. This indicates that competition of cover crops with soybean plants, when seeded at the R6 of the soybean variety, was negligible. Therefore, no economic soybean yield loss should be expected. Interseeding cover crops into established soybeans in the Northern Plains is possible but produce relatively low amounts of fall cover crop biomass.

This report is part of the outreach effort associated with a National Institute of Food and Agriculture grant from the U.S. Department of Agriculture awarded to North Dakota Agricultural Experiment Station scientists (Award no. 2016-69004-24784, "CropSys - A novel management approach to increase productivity, resilience, and long-term sustainability of cropping systems in the northern Great Plains").

For more information about utilizing cover crops into the farming system, see the web site https://www.cropsyscap.org/.

Rye For Biomass May Fit Into Corn And Soybean Rotations

What's Been Learned About Interseeding Cover Crops into Corn and Soybeans