Big Roots from Ryegrass Build ‘Highways’ in the Soil

Pictured Above: DOING WHAT MATTERS. Springerton, Ill., no-tiller Ralph Upton Jr. says no-till practices and cover crops have been a major player in hiking soil organic matter on his farm, with the roots of annual ryegrass in particular busting through the previously impervious plow pan.

WE’VE GOT TWO different soils on our farm in Springerton, Ill.: What we call hill ground, and then bottom ground. The hill ground has got plenty of problems, and the bottom ground — if you don’t have too many water problems — will do a real good job of growing crops.

When I started farming I was plowing every year, and then, I got out one year. It was February and I was done plowing. The first rain I got was 5 inches and you could see the erosion. I made a commitment that I would never plow that field I was looking at again.

In the 1980s I was no-tilling a rotation with wheat and then we grew buckwheat and sold it to the Japanese. If we planted it in June, we could harvest it in August and still have plenty of time to plant hairy vetch. At that time, I was planting hairy vetch and oats. Then we would plant cereal rye behind the soybean.

In 1983, we had a big drought. It would compare to the drought of 2012. We had a guy doing some work cleaning out a fence row and he was burying brush piles. He would shove the dirt up and I would grab a handful.

We had dug down about 5 or 6 feet and were surprised to find that despite the drought there was moisture just a foot down. So I would grab some of that soil, wad it up and make a mud ball — enough of a mud ball that you would throw it on the ground and it wouldn’t come apart.

I got to asking people, “Why can’t we get to that moisture?” “Well, we got a plow pan and there’s no way you can get a root through it,” I was told.

I had a plow pan at about 6 inches into the soil profile. I got hold of (the late conservation consultant) Mike Plumer and I told him what I was dealing with. We went out with a backhoe and dug 200-foot long trenches 3 feet deep that crossed through the good and bad corn. In the bad corn, which was only going to make 20-40 bushels, there was a plow pan. But in the areas where the old fence rows were, the corn was good. There was no plow pan and there was moisture throughout the soil profile.

Where the good corn was, the roots went down deeper, and at the poor corn the roots stopped at the plow pan. That plow pan looked like you took white paint and a wide paint brush and just painted a white stripe across the soil profile.

I wanted to try no-tilling and continuous cover crops, never tilling the ground. So when you shell corn, you plant a cover crop. With the help of Mike and 3-4 other people from the University of Illinois and two from the NRCS we put in for a SARE grant and got one to study long-term no-till and cover crops.

We started that in the early 1990s and then in 1997, the Oregon Ryegrass Commission came through and Mike came with some annual ryegrass. We put in a ryegrass crop beside our long-term no-till.

What they came for was just to see if annual ryegrass could become a cover crop. We started running tests for them to see if that could happen. At the very beginning, they tested 20 or 25 varieties. The first winter only three of them survived, which was shocking. 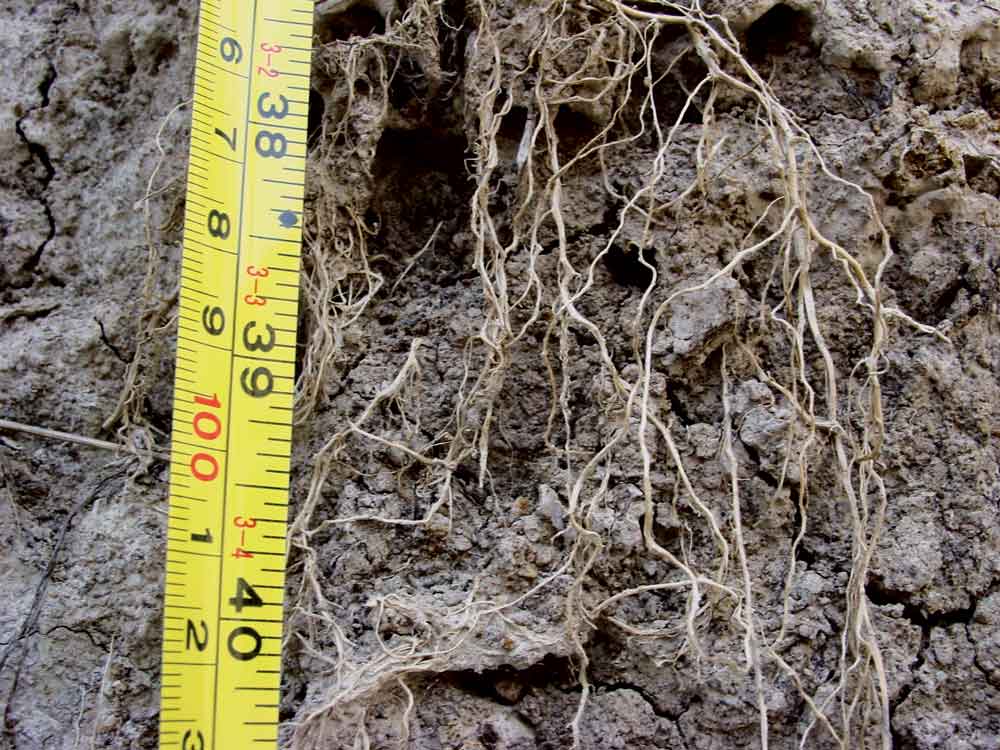 GOING DEEP. Digging down into the soil, Mike Plumer and Ralph Upton Jr. found the annual ryegrass roots were growing several feet down below the soil surface. In one field with particularly good soils, the roots went down 72 inches, providing aeration as well as channels that made room for the roots of the following cash crop to grow into.

But we also saw you could no-till corn or soybeans into ryegrass and it wouldn’t hurt the yield, and if you put it behind corn you’d see much nicer corn at harvest because over the top of that ryegrass it grew up nice. It would just come up and be green.

When we started planting annual ryegrass, I would kill it early because I thought we were getting everything out of it that we should be getting. But I was cutting myself way short. I should have been letting it grow and go green and get more benefit out of my cover crop.

One Saturday, a farmer from Oregon came by. His group had been to a farm show and wanted to come see the ryegrass. We went out to the field and I showed it to him. I had always been trying to find a plant that would put out a deep root, like sweet clover or something, but I always thought a plant had to be 3 feet tall to have a root 3 feet deep.

We were wondering if there was anything else we could do, so I went in the shed, got the shovel and we went back out to the field and started digging. It was in February and we had ryegrass roots down 2½ feet. The ryegrass would only get 3 inches tall. That wasn’t supposed to happen.

I got in touch with Mike and told him what we found, and he said, “Well, that’s interesting.” I said, “Well, you need to come up and we’ll do some digging.” He came up and that’s all we did on April 8. The first time we went out, we went to about four different soil types. The one I really remember was a good soil type. We had ryegrass 4 inches tall and the roots went down 72 inches.

On my SARE grant, when I started, Mike took some soil samples and my organic matter was 0.08%. Today it’s 2.9%. The way this thing works is no-till and cover crops, so you don’t till the soil.

University of Kentucky researcher Lloyd Murdoch was studying plow pans and saw an article of Mike’s and he called him and he said, “I want to come up and see if I can see anything.” When we dug, you could see from using the cover crops that the darker soil was moving down and was a different color.

He wanted to compare it to something so he asked me if I had some yield data. He said, “Let’s go back to 2000 and look at the beginning.” He went to the county building and got the county average.