Cover crops combined with no-tillage systems can increase soil organic carbon, which could help slow the effects of climate change on farms, according to a recent study by University of Kentucky (UK) College of Agriculture, Food and Environment scientists.

The project was conducted at UK’s Blevins research plots. Located at UK’s Spindletop Research Farm in Lexington, the plots are only one of a few sites in the world that have been continuously in no-till agriculture for more than 50 years. Each year, the plots host no-till corn research projects, and in the winter, they receive a cover crop of cereal rye.

Using historical field data, field observations and agricultural modeling, UK researchers were able to explore the long-term effects of cover crops and no-till on the site and predict how those management practices may continue to benefit similar agroecosystems in the future.

The model analyzed yield and field data collected from the Blevins plots from 1970-2018. It showed that no-till and cover crops work together to simultaneously slow down soil carbon decomposition and increase carbon inputs into the soil. While cover crops combined with no-tillage led to carbon gains in the topsoil compared to a system that uses conventional tillage and cover crops, no-till only minorly contributed to the carbon gains. The model data echoed field observations. 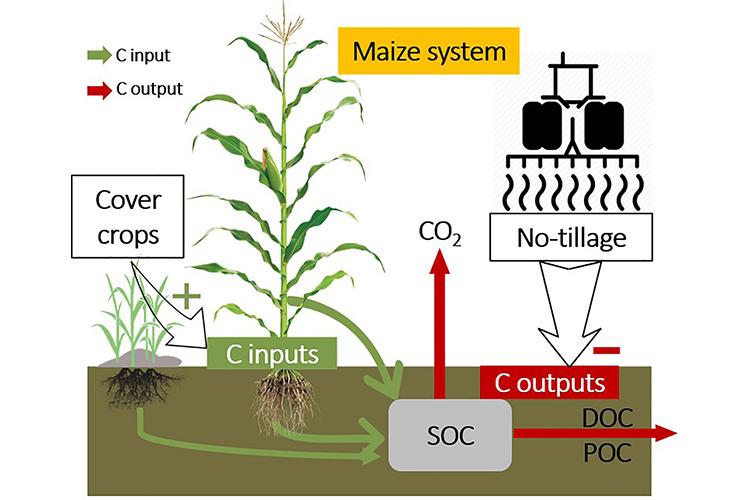 Using an improved agroecosystem modeling approach and field observations, UK scientists found that long-term no-tillage together with cover crops would significantly enhance soil carbon sequestration in the context of climate change, gaining many more carbon benefits than those from no-tillage alone. Graphic courtesy of Ren lab.

“Our research shows that soil carbon sequestration is highly connected to biomass carbon inputs from both the cover crop and corn residues,” said Wei Ren, UK assistant professor who led the project. “Elevated carbon dioxide and warming effects would promote the growth of the cover crop to increase soil carbon gains under future climate change.”

The model predicts that the benefits from cover crops will only increase with time as elevated carbon dioxide levels increase cover crop biomass yields.

The researchers’ findings were published in the academic journal Agricultural and Forest Meteorology and are available online at https://doi.org/10.1016/j.agrformet.2020.108090.

With more than $260,000 in funding from the Alfred P. Sloan Foundation, Ren is beginning additional research at the Blevins site to evaluate farming practices that can lead to net-zero emissions for producers. UK’s Blevins site is just one of the locations for this study, as Ren, who is the project’s co-principal investigator, is joined by researchers from Ohio, Indiana and Michigan. Integrating new experimental observations at multiple sites into an enhanced agroecosytem model developed by Ren’s group, they will analyze and evaluate carbon balances in the soil that are the result of various best agricultural practices across different soil types and major cropping systems that are common throughout the Midwest.

“I hope findings from this study will give us the best agricultural practices that we can recommend to producers, students and the broader scientific community to help reduce agriculture’s environmental footprint,” she said.