The decision whether to mix species or plant a single species as a cover crop depends on your goals, time of the year, and costs.

Planting a mix can increase biodiversity on a farm and can also insure against weather extremes, since different species will thrive in different weather conditions. Planting more than one species can help fulfill multiple goals that producers often want the cover crop to achieve.

Grass cover crops, such as cereal rye, are most suited to prevent erosion and nutrient loss. Legumes, for example hairy vetch, can supply N to a subsequent crop. Brassicas, which include turnips, radish, and mustards, are fast-growing, scavenge nitrogen and can be grazed. Brassicas mature quickly and winterkill in our environment, but cereal rye and hairy vetch will survive Nebraska winters and must be terminated in the spring.

Combining grass and legumes in a cover crop mix may reduce erosion and provide N, although there is often a trade-off where both goals will not be fully realized. Keep in mind that selecting cover crop species with mutual benefits (for example, grass and legume for both erosion control and N supply) is more important than simply increasing the number of species in you multi-species mix.

On the other hand, picking a well-adapted single species may be the most productive and economical choice for most situations. If you focus on one goal, for example preventing erosion, it makes more sense and is cheaper to plant a single species suited for that goal, such as cereal rye.

Species in a mix should complement each other. Because of their differences in growth, species can be used for different goals at different times. For example, in a cool-season fall-planted cover crop mixes of brassicas, grasses, and hairy vetch, brassicas will emerge first (figure 1). They will grow faster than the other species and may provide grazing, but are killed by the first hard freeze.

In the spring, the same mix will be dominated by grasses which provide erosion control, scavenge N and can be grazed. In our trials, the spring biomass of cool-season fall-planted mixes was made up of 70 to 100% cereal rye, even when cereal rye only made up 50% of the seeds in the mix (figure 2) (Koehler-Cole et al., 2020). Legumes are slower growing than grasses or brassicas and often outcompeted in mixes, but may provide some N in the spring.

Management of your cover crop mix

The species in your mix should be compatible to each other in terms of management. The amount of time available to grow will be the most important considerations for compatibility. When establishing the cover crop mix, plant at a time that is optimal for all its species. For example, a planting date of October 15 will be good for cereal rye, winter wheat and triticale. Do not include brassicas or hairy vetch, because October 15 is past their optimum planting time. The more time your mix has to grow, especially during the summer, the more options you have for diverse species. Warm-season annual cover crops can be planted for a full-season cover crop or in July after winter wheat harvest (figure 3). If you plant a warm-season cover crop mix in the summer, you have the opportunity to select species that will meet your specific goals; i.e. nitrogen fixer, early grazing mix, late grazing mix, compaction fighter or high carbon mix. When planted at the right time, mixes of warm-season cover crops are often more productive than mixes of cool-season cover crops (figure 4, figure 5).

Consider how you plan to establish the cover crop. Will you broadcast or drill? Small-seeded species can be broadcasting, but in general, all species establish better when drilled, due to the improved seed-soil contact. Select a planting depth that is suitable for all species in your mix. For some species, such as deep-planted peas and shallow-planted crimson clover, planting depths do not overlap. In this case, you could use a drill that has two boxes, one for small seeded species, i.e. clovers and some brassicas and one for larger seeded species. The box for the smaller seeded species or shallower seeded cover crops has a seed tube that just dribbles the seed on top while the depth of the larger seeded cover crops can be set to what you want. 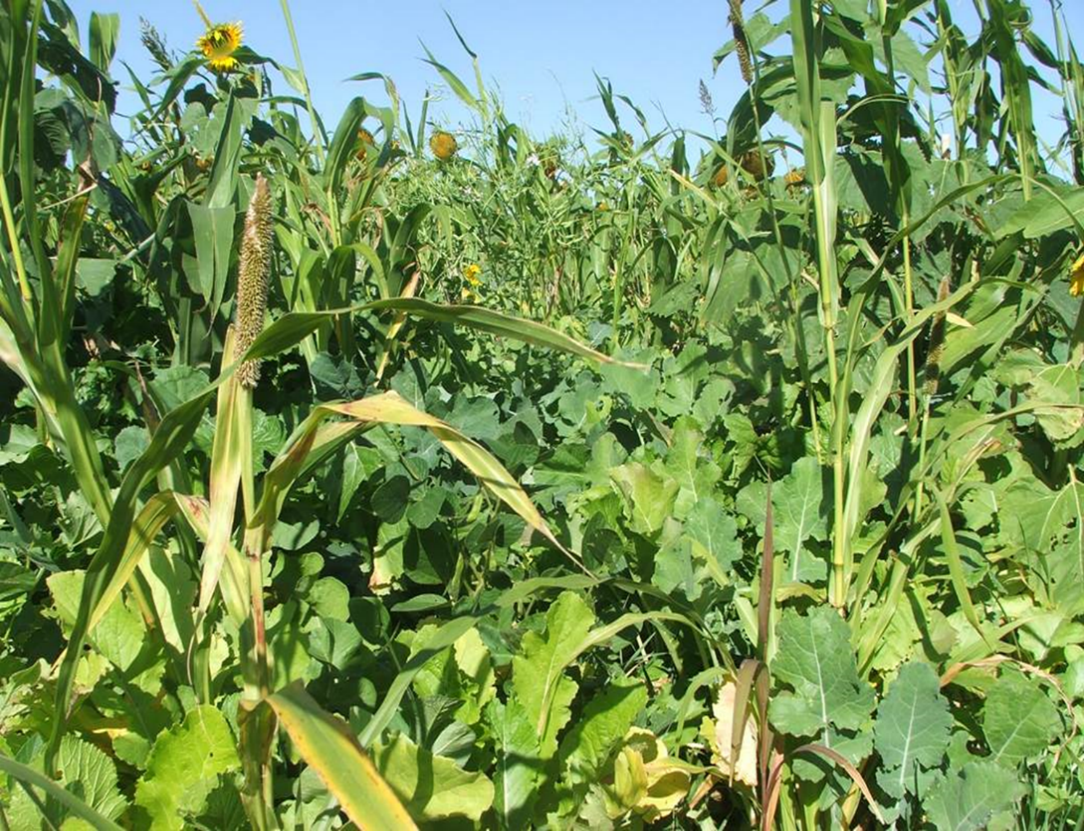 FIGURE 5. A cover crop species mix of about 15 species, including brassicas, warm-season grasses, legumes and other broadleaves. The goal was a mix that would add organic matter to the soil. Mix was planted in July. Picture taken by G. Lesoing.

What will the herbicide program be and how will the cover crop be terminated? Residual herbicides applied to the previous crop may prevent the germination of many cover crops, especially brassicas and some legumes. Likewise, if you have problematic weeds that you must control while the cover crop is in the field, selecting cover crops that have natural herbicide tolerance will be important. When it comes time to terminate the mix, choose a method that will reliably kill all cover crops, whether that method is winter-kill, herbicides or mechanical termination. For example, while glyphosate applications are typically reliable for killing cereal rye, we observed that they may not fully terminate hairy vetch in a mix. Scout your fields for surviving cover crops as a second termination may be required, especially for brassicas which quickly go to seed and can become weeds.

As with all cover crops, make sure planting and termination times of the cover crop mix are in line with recommendations by NRCS, Risk Management Agency and crop insurance.

Combining several cover crop species in a mix may be an option to achieve multiple goals with a cover crop. However, species will only contribute to the overall success if they will be productive in terms of biomass. Ensure that all species in the mix are compatible given the environment and management practices for the success of your diverse cover crop.

Creating a Blanket of Benefits with Cover Crop Creativity

[Webinar] Selecting a Cover-Crop Mix to Achieve the Desired Results