Sidedress nitrogen has become a popular way to apply nitrogen possibly for a few reasons: 1. wet springs over the last several years have resulted in N loss from early applications; 2. sidedressing N allows better distribution of labor and equipment, especially in wet springs when the planting window may be small; 3. theoretically it makes sense because early spring is when there is greater potential for N loss because of excess precipitation and slow crop uptake; and 4. because the equipment to sidedress has become increasingly available. While these may all be good reasons, it is good to re-evaluate management practices periodically.

Split applications don’t always work better than a single pre-plant application close to planting. Over the last several years, we have been doing a substantial amount of research to evaluate sidedress applications and determine where this practice might produce the greatest advantage. 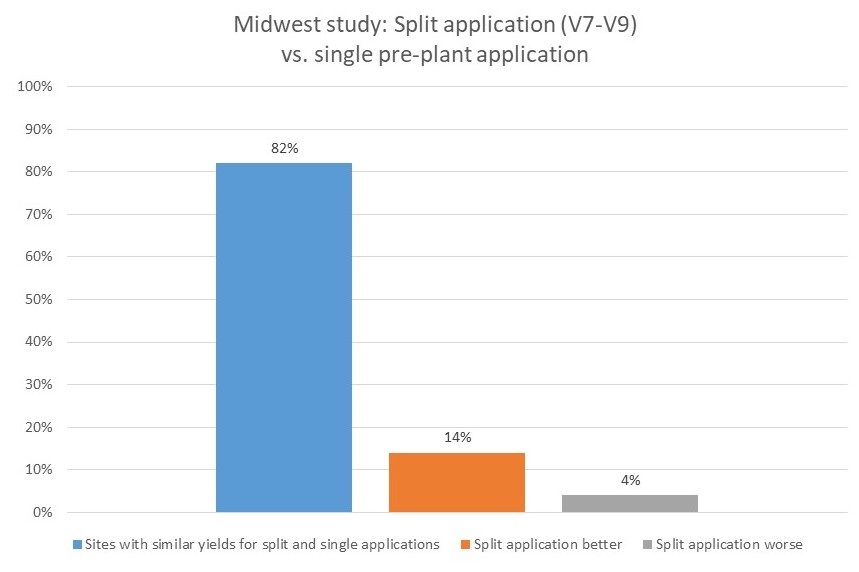 In a different study over a three-year period with 15 sites in Minnesota, it was observed that when split application improved yield, the best time to make the split application was around the V4 to V8 development stage. Later application (V12) had no advantage, and even resulted in a yield reduction on some sites compared to the single pre-plant application. This study was funded by Pioneer Hi-Bred (now Corteva), Minnesota's Agricultural Fertilizer Research and Education Council (AFREC), and the Minnesota Corn Growers Association.

There were two reasons for this reduction. In some cases, yield was lost because the crop was starved for N prior to the application and could not recover. In other cases, where there was little precipitation at the time of sidedress, it is likely that the fertilizer took too long to get into the root-zone.

For the first situation, the solution is to apply higher rates of N with the first split. We observed that if the application is done by V8, 40 lbs N/ac at pre-plant was sufficient (no difference compared to 80 lb N/ac). For the second situation, there is little that can be done, but this is an important point to consider. The reason for doing a split application is to reduce the risk of N loss during the early spring; however, waiting to do a sidedress application has risks too. Sometimes it is not possible to get in the field in a timely manner because conditions are not fit, or, as in our case, there could be insufficient rain to move the application into the root zone.

Another question to consider is the total rate of N that is needed with a pre-plant vs. a sidedress application. In general, people tend to think that a split application is more efficient. However, we have found that N application timing minimally affects residual soil N content, uptake by corn, and grain yield. In other words, regardless of when N is applied, the economic optimum N rate is similar if we assume the same cost for fertilization. It is important to recognize that the additional trip across the field for a split application has a cost, which is often not discussed.

It is clear from these results that soil type and weather conditions are primary considerations when choosing timing of N application. Another thing to keep in mind is that fields don’t need to be managed uniformly. Many parts of the field will see little difference with respect to application timing, while some areas of the field are more prone to loss due to ponding or coarse-textured soils, and might have a greater frequency of success with split application.

Timing Matters: How to Limit Spring Nitrogen Loss for Corn

Nitrogen Fertilizer: Weighing The Value Of Fall Vs. Spring Applications