Timing Matters: How to Limit Spring Nitrogen Loss for Corn

As we get closer to spring in Minnesota, the birds are singing, snow is melting, and planting is on the horizon. When it comes to nitrogen leaching, there is no better time to think about it than in the spring.

High precipitation and minimal crop demand for water makes for perfect conditions for water to move quickly through the soil profile, taking nitrogen with it. Although we cannot control the weather, there are a few management practices, including application timing, that can help prevent excess nitrogen losses in the spring. 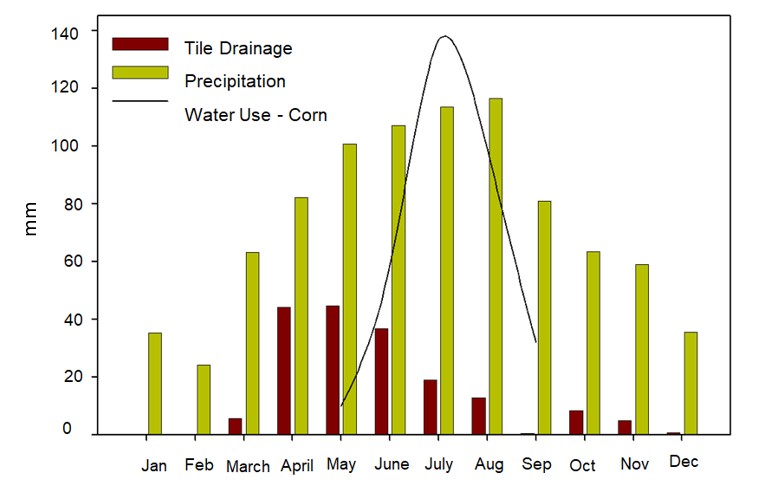 WATER USE, NEEDS AND DRAINAGE. This graph shows 30-year normal precipitation with corn water use as evapotranspiration (ET) from a project in Waseca, Minn. Tile drainage shows a peak in the spring months of April and May when excess nitrogen applications could be more susceptible to leaching. (Randall, 2004)

When Should N be Applied on Coarse-Textured Soils?

Coarse-textured soils can be found throughout the state but are more prevalent in central Minnesota. These soils have more sand than clay and water moves quickly through them.

For irrigated coarse-textured soils, the recommended best management practice (BMP) is to split-apply nitrogen from V6 to around V12. An application at planting is usually enough for early-season growth and a sidedress application ahead of rapid nitrogen uptake, which starts around V7, is sufficient to avoid nitrogen stress. Split applications on coarse-textured soils have been shown to improve nitrogen uptake, leaving less nitrogen in the soil available to be lost. Split applications can also be timed to avoid the period of high nitrogen loss risk in April and May.

If split applications are not a viable option, a single early sidedress application of nitrogen around or before V4 is preferred to applying all nitrogen preplant. With the early sidedress application, the addition of a nitrification inhibitor is needed to avoid excessive loss. Nitrification inhibitors that contain nitrapyrin or dicyandiamide (e.g., N-Serve, Instinct, SuperU) delay the conversion of the ammonium form of nitrogen to the nitrate form of nitrogen. Since the nitrate form is negatively charged and is repelled by the negatively charged soil particles, it is easily lost with water. Keeping nitrogen in the positively charged ammonium form means it will be attracted to the soil and not be leached.

When Should N be Applied on Fine-Textured Soils?

Another great option for fine-textured soils is applying all of your nitrogen in a preplant application. This is a good option for land that is not irrigated or if you think there is a risk you won’t be able to get back in the field to do split applications due to weather.

How Much N Should be Applied in Each Split Application?

There are certain management scenarios where more nitrogen might be needed preplant. For example, if a cover crop was grown over the winter and sufficient biomass accumulated, there may be some tie-up of nitrogen in early spring due to the decomposition of that biomass. Similarly, for continuous corn rotations, 30-50 pounds of nitrogen (or around half of the total nitrogen you’re planning to apply) should be applied at planting to avoid nitrogen stress. Systems with high residue (like cover crop rotations, continuous corn, and even no-till) might require more nitrogen up front. For other systems with less residue, it is common to evenly divide the total nitrogen between the split applications.

Why Not Always Split-Apply N?

Although split applications are a good option in certain situations, they are not the only BMP that can reduce nitrogen loss. In wet years where split applications are followed by a heavy rain, there is a risk for loss and a resulting yield dip. Use of other BMPs like applying the correct rate, using nitrification inhibitors, and use of slow-release nitrogen fertilizer like ESN can all help reduce the risk of nitrogen loss. Which practices work best in your operation will depend on soil type, weather, nitrogen source, and field management.