DIVERSITY is an important concept for no-tillers, both in terms of cropping systems as well as marketing streams. In terms of marketing, many farmers are finding they’re able to boost their bottom lines by finding different avenues for selling the crops they grow instead of selling into the commodities market, like selling grain directly to distilleries or breweries. In terms of adding diversity to cropping systems, studies have shown that growing multiple species in a cropping rotation can improve soil health and promote carbon sequestration.

Putting these two concepts together can be a real win-win for farmers, but rarely does that happen without substantial effort.

Managing Marginal Ground. Perry Philpott and his father, Dale, have embraced both types of diversification on their 2,000-acre farm near Englewood, Tenn., that includes a 200-head cow/calf operation, stocker cattle, Angus bull leasing, pasture where they grow a fescue/orchardgrass mix to feed their cows, as well as about 350 acres of row crops. 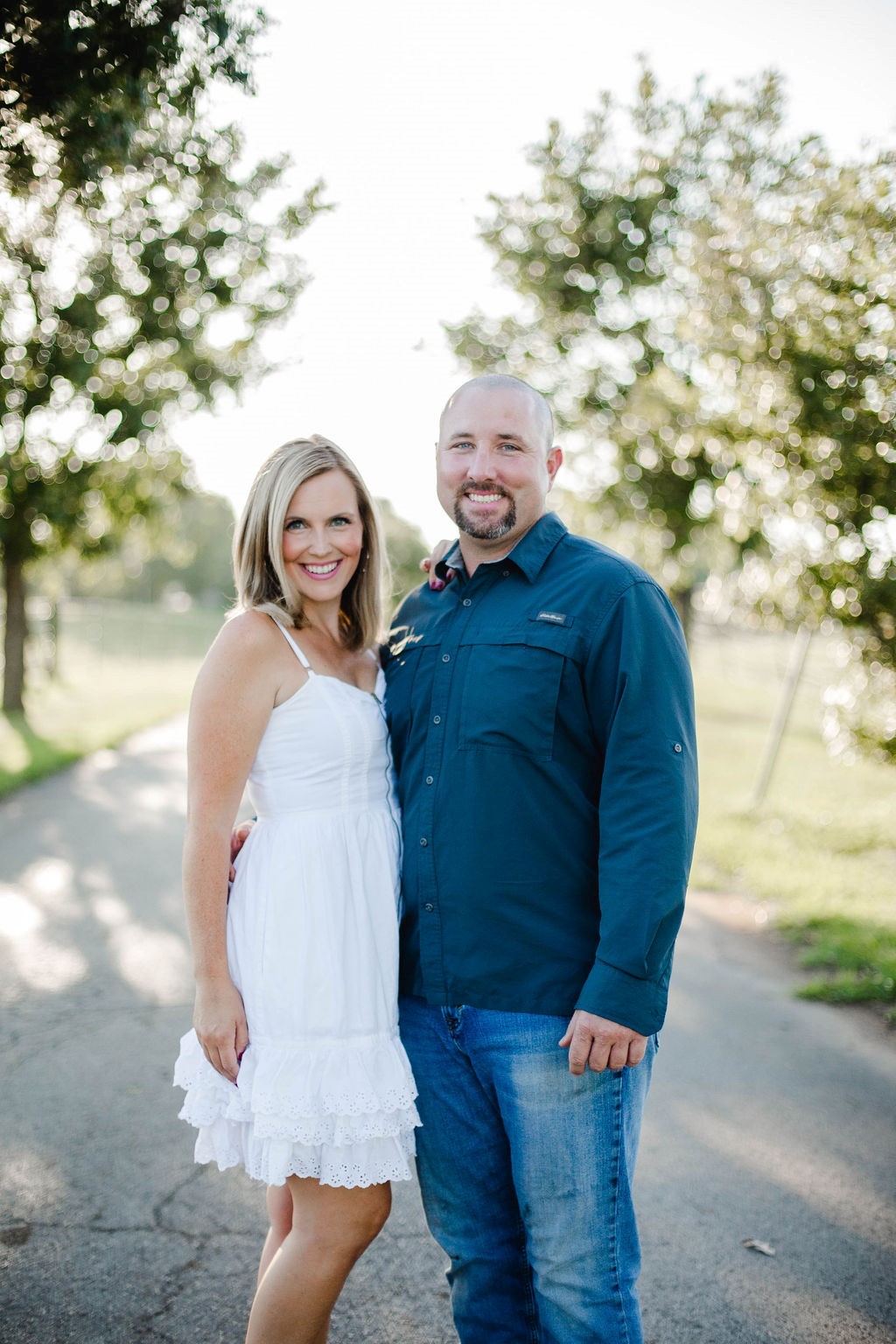 Former tobacco farmers, the Philpotts grow soybeans, corn, sweet corn, pumpkins, watermelons and wheat. They use a 6-row Kinze planter to no-till the corn and soybeans into wheat stubble in the spring, usually in March or April. Yields usually average about 150-175 for corn, though Philpott says they sometimes see yields as high as 225-250 bushels per acre. For soybeans, yields are usually in the 50-80 bushel per acre range.

But Philpott, like many farmers, has some marginal ground with soils that wash away easily and aren’t productive enough to justify raising row crops. The income potential from 15-20-bushel soybeans, for instance, might not cover the costs of producing it.

“When you get these major rains and you see your fields start washing, that really makes you consider alternatives,” says Philpott.

There are a few options for less-productive acres, such as using them as pollinator strips or enrolling the acreage in a conservation program. But Philpott was looking for a market-based solution, and learned about a new initiative from Genera — a Vonore, Tenn.-based company contracting local growers to plant switchgrass or biomass sorghum that will be made into compostable food containers and packaging. 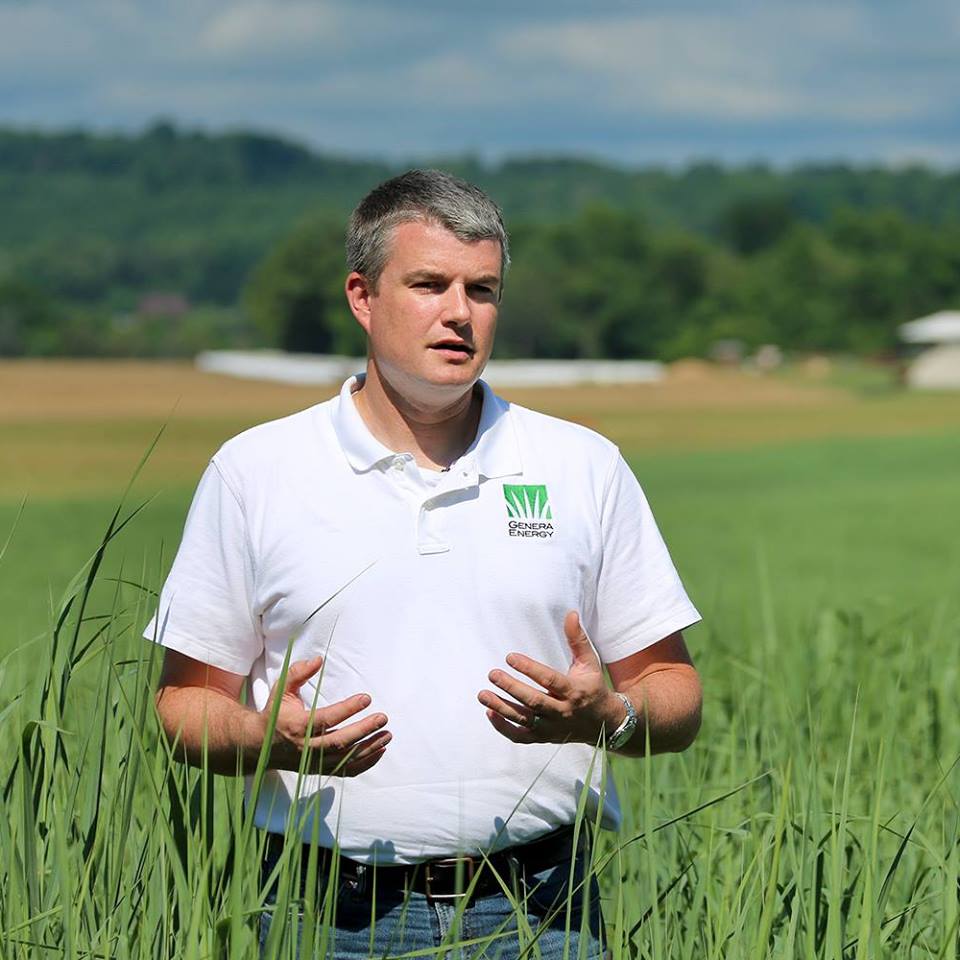 Most compostable food containers and packaging available today is made from bagasse, the fiber left over after sugarcane has been processed for food or biofuels. Bagasse is usually produced in Thailand, shipped to China, molded into a takeout container and shipped to the U.S., according to Genera’s vice president of business development, Sam Jackson.

But this can cause supply chain issues for U.S. companies. And in today’s business environment, many companies are looking for ways to source products locally and sustainably and customers are seeking products that are made in a way that won’t pollute local watersheds or result in single-use products that end up in landfills. According to Jackson, Genera recognized that the industry’s reliance on non-sustainable fiber, international shipping and long lead times was a problem in need of a solution.

Having previously supplied the biofuels industry with biomass grown in Tennessee, Genera saw this as an opportunity to create a new marketplace that supports local farmers while also meeting a market need for locally sourced, non-wood fiber. The company is building a new processing facility in Vonore that will come online late in 2020, around the same time as the anticipated switchgrass harvest.

“Our core focus is setting up a domestic U.S.-based farm-to-table food service product that we can grow with our farmers here locally, convert locally, and use in our existing market to help simplify that supply chain challenge that we’re seeing from overseas,” says Jackson.

After harvesting row crops in 2019, Philpott planted wheat for the winter. In spring of 2020 he’ll harvest the wheat and use a Brillion agricultural seeder to no-till the switchgrass. In his past experience with switchgrass, he had tried using a drill but found he didn’t get a good stand.

“It’s real easy to plant the switchgrass seed too deep. When I use the Brillion, it literally drops the seed on the ground and lightly presses it in, making for a really good stand,” he says.

Philpott says switchgrass, which is a perennial that will grow for a decade or more, is a relatively low-maintenance crop. It grows well in nutrient-depleted crop fields, is water efficient, drought resistant and helps boost soil organic matter, according to Michigan State University. Genera provides management recommendations for switchgrass to farmers that they have developed over the past decade that they’ve been working with it.

In spring, shortly after switchgrass emerges, Philpott broadcasts about 120 pounds per acre of urea (with the amount depending on soil test results) as a fertilizer, and that’s the only fertility required for the season. Some fields may require phosphorous or potash if indicated by the soil test.

He doesn’t expect to need herbicides very much either, as a stand of switchgrass does a does a good job of suppressing weeds.

“Typically, any type of chemistry that is used for weed suppression is done in the establishment year, to prepare the site prior to planting,” says Jackson. “Once switchgrass is established, it’s typically quite dense and will shade out all competition, so rarely do we use weed control chemistry beyond the first year.”

Typical of perennial plants, it takes a few years for the stand to completely fill in to what would be considered full production growth.

“The first and second year, you’re going to have a little competition from weeds,” he says. “But if you do your job, by the third year the switchgrass gets so tall it pretty much roots out everything else and you’ll have a good, clean stand of switchgrass.” 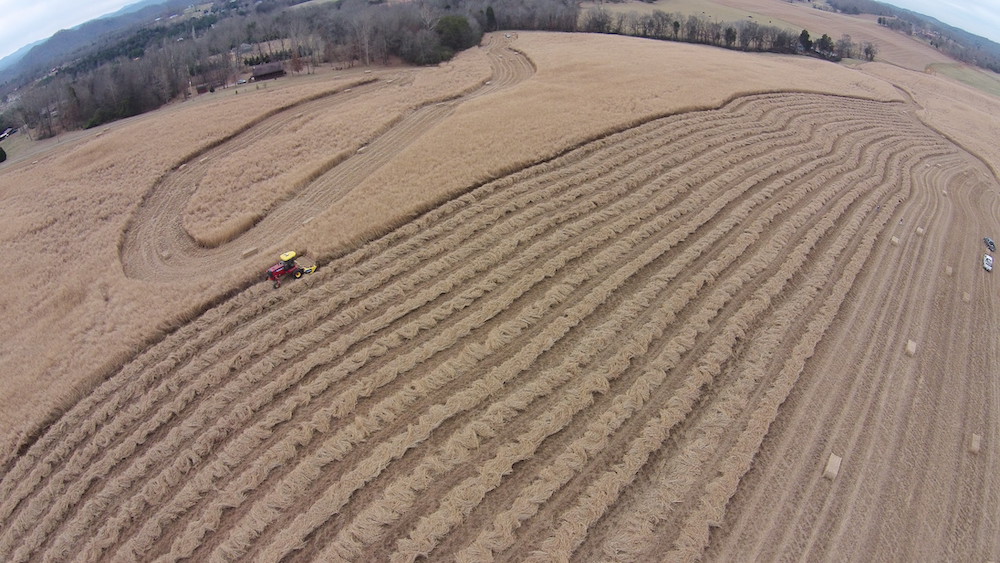 MAKING BALES. This aerial view of switchgrass being harvested shows windrowed biomass and some bales that were made afterward.

“You can set the width on the windrow as it comes out of the discbine, drive straight, and make pretty good bales. It’s pretty simple as far as harvesting goes.”

Philpott acknowledges that the first two years of production will not bring top yields, but once his switchgrass is filled in around year 3, he anticipates harvesting about 8–10 tons of biomass per acre.

He doesn’t recommend growing switchgrass for farmers who are getting good yields from their corn or soybean crops, but he sees it as a great option for his less productive acres, not just for the income it can bring but also for the environmental benefits.

“It think it’s good for young farmers. We really need to be checking into practices that conserve on natural resources. Switchgrass is something I can bring people to my farm and be proud. If it’s taking the place of plastic and Styrofoam and not going out into the environment, I’m willing to try it.”

[Podcast] No-Tilling for the Seed Market with Garth Mulkey