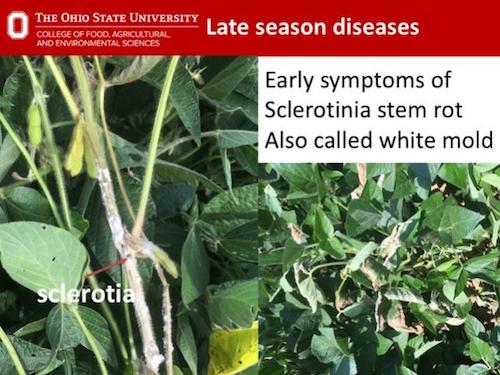 The seed suppliers want your early orders and the catalogues are all spread out on the tables. Now to begin the process of choosing the best variety or hybrid for your fields that can hold up to all of the challenges facing soybeans and corn in Ohio. Our recommendation is to first focus on the disease and insect scores. Every company uses a different scale based on 1 to 10 — but for some companies 1 is best and for others, 10 best — so first read the fine print. In addition, some companies use a distributive disease rating scale, using words like “excellent disease package,” “good disease package,” or “poor.” While this scale is unclear as to which specific disease the hybrid is most resistant to, it can still be used as a guide for hybrid/variety selection. For instance, a hybrid listed as having an “excellent disease package” should be less susceptible to the primary diseases than one listed as having a “good disease package.” Next step — what key diseases and insect pests do we need to focus on.

Soybeans: the four diseases that impact Ohio farmers the most are: Phytophthora (on poorly drained soils), Frogeye leaf spot (continuous soybean fields from central Ohio-south),Sclerotinia (fields with poor air drainage – Northeast and Eastern regions), and SCN (more than 50% of fields now have detectable populations of SCN – with more than 7% in severely high populations).

Phytophthora root and stem rot. This pathogen, Phytophthora sojae, can be found in most fields in Ohio but causes disease when those fields are saturated with rains for 24 hours or more. Under these conditions highly susceptible varieties can have 100% yield loss. The heavy clays of Northwest Ohio are particularly prone to this disease. During 2019, we detected Phytophthora stem rot over a broader geographic region due to the amount of rain. In the seed catalogues, there are two ratings for resistance, 1) a listing of a Rps gene and 2) a quantitative resistance score on a 1 to 9 scale. The Rps genes were the first line of defense and have been used since the 1960s (Rps1a was the first). Based on recent check-off funded research, we can confirm that most fields in Ohio have populations of P. sojae, where these genes are no longer 100% effective. They might work in one spot in the field, but not 2 feet away.The next line of soybean defense is the quantitative resistance, which is many, many genes working together to limit the growth of the pathogen. Much like a teenager that is immune to all of the badgering to do their chores — it isn’t bothered at all by the presence of the pathogen. This quantitative resistance has been called many things in the seed catalogues: partial resistance, field resistance, and tolerance.Our best varieties have scores of 3 on a scale of 1 to 10 where 1 is very high resistance (really an effective Rps gene) and 10 is dead. Focus on the best score rating for that seed company.

Frogeye leaf spot. This has now become a recurring problem for soybeans in southern up to Central Ohio. High levels of inoculum (lots of leaf spots) in the fall that can overwinter in Ohio, so this is especially important for those fields that are continuous soybean. The first thing is if you had Frogeye at the end of the season in 2019, please do not plant the same variety back in that field. I do that to create the best opportunity for our research plots to develop disease for fungicide studies, and since I have that covered, you don’t need to do that. Any frogeye in fields in 2019 (conditions were not as favorable as previous years) means it's time to choose something with better resistance scores. A resistant cultivar will not develop frogeye, so no yield hit and no added input costs for fungicides if conditions are favorable for disease to develop.

Sclerotinia stem rot. The infections for this disease occur during flowering under conditions of cool temperatures (70s F) and high humidity. High plant population and poor air drainage can also favor this disease. Resistance to this pathogen, Sclerotinia sclerotiorum, is also quantitative (many genes) and some are associated with limiting pathogen growth but also with longer internodes to help with disease escape. The structure, sclerotia, looks like a mouse or rat dropping, and can survive for long periods of time if they are buried. This is one soybean disease where no-till can favor the degradation of the sclerotia.

Soybean Cyst Nematode. This nematode continues to expand in the number of fields it can be detected in (> 50%) in Ohio. More importantly, we are also identifying fields with super high numbers of SCN (7% of those sampled during 2018 & 2019)!It is very important to continue to purchase varieties with SCN resistance. This is a success story.Planting soybean varieties with resistance has kept this nematode at very low levels for over 20 years. Based on earlier reports from the ‘90s, it had the potential to become a major problem, but then the companies all worked hard to provide new varieties with SCN resistance. Now, as you would expect, similar to Phytophthora, where the same resistance has been deployed for 20 years, we do have a number of fields in Ohio where the SCN populations are adapting to PI 88788 or Peking or both sources of resistance.Interestingly, not like the Rps genes of Phytophthora where they work or they don’t, SCN adapts slowly by increasing the number of successful feeding sites on the roots of resistant plants. So early in the process, we don’t see the decline in SCN numbers when soil tests are collected and yields begin to drop. Later in the process, increases in SCN occur overall in the field and yield loss is similar to that of a susceptible variety. We are in the midst of wrapping up this statewide survey as part of the SCN coalition to assess where SCN is in Ohio and if it has adapted. Summary results from this for Ohio will be coming in April.

Gray leaf spot (GLS) of corn. This is still the most frequently occurring foliar disease of corn in Ohio and neighboring states, but thanks to genetic resistance, the impact of this disease is low in most years. On rare occasions when susceptible hybrids are planted under warm, humid conditions in river-bottom fields, yield loss can exceed 50%. Resistance in the case of GLS does not mean “no disease,” it means less disease or low disease severity. Compared to susceptible hybrids, fewer and smaller lesions develop on resistant hybrids, leading to slower disease spread from the lower to the upper leaves. Some companies rank their hybrids for resistance to GLS on a 1 to 9 scale, with 1 being most resistant and 9 being most susceptible. However, some companies do the opposite, with hybrids with higher scores being more resistant than those with low scores.

Northern Corn LeafBlight (NCLB). Like GLS, this is one of the most common leaf diseases of corn in Ohio, and over the last few years, NCLB has been more severe than GLS. Two types of resistance are available to protect against races of the fungus that cause NCLB: partial resistance (non-race specific), which protects against all known races of the fungus, and race-specific resistant, which is controlled by single Ht genes and, as the name suggests, protects against specific races of the pathogen. Partial resistance is expressed as a reduction in the number and size of the lesions, and the amount of spores produced in the lesions, as well as an increase in the length of time it takes for new lesions to develop and a new crop of spores to be produced. Race-specific resistance is controlled by one or more Htgenes, such asHt1, Ht2, Ht3, and HtN. Resistance conferred by Ht1, Ht2, and Ht3 is expressed as small chlorotic lesions with limited sporulation, whereas resistance conferred by HtN results in fewer, smaller lesions, similar to what is observed with partial resistance. For years, races 0 and 1 were the most predominant races of the NCLB fungus in Ohio. If we assume that these races are still the most prevalent, the fact that we continue to see susceptible reactions on multiple hybrids at multiple locations across the state suggests that we are either planting hybrids without Ht genes (susceptible to races 0 and 1) or with Ht1 only (susceptible to race 1). Avoid planting hybrids without Ht resistance. Click here for more on NCLB resiatance.

For diseases like ear rots for which there is very little information in seed catalogs on disease resistance, use your own experience as a guide for making hybrid selection. For instance, if the hybrid you planted this or last season (or five seasons ago) ended up with high levels of Gibberella ear rot and vomitoxin, it means that the hybrid is susceptible. Avoid planting it in that same field next year. Also, since resistance may change over time, your experience with a hybrid may be just as good as or even better than the information in some seed catalogs when it comes to disease susceptibility.

Do Disease-Resistant Wheat Varieties Pay A Price In Yield?