Crop production in Brazil has made dramatic gains in recent decades — and there’s potential for plenty more, say advocates of no till and conservation tillage in the country.

In fact, members of the Brazilian Federation of No-Till Farming say no till is the key to achieving a long-term sustainable agriculture without additional deforestation.

Soybean production has risen from 40 million to 110 million metric tons annually in the last 15 years, and corn production from 30 to 80 million tons per year.

That’s worth paying attention to in Canada. As the world’s largest exporter of soy and second-largest exporter of corn, Brazil competes against Canada in international markets, especially in an era of U.S.-driven trade disruption.

Genetic improvements and shorter-season varieties are helping Brazil’s farmers, but so are better soil management practices, particularly adoption of no till.

For one of Brazil’s no-till pioneers, it all started in the 1970s with a Newsweek article about the University of Kentucky’s Dr. Shirley Phillips and a new form of soil management. Intrigued by what he read, Manoel Pereira headed to Kentucky to learn more. He’d been growing soybeans conventionally on his farm near Ponta Grossa in Paranà state, but was plagued by erosion problems on his sandy soils.

“We had the first no-till plot in Brazil on our farm and today our farm is 100 per cent no till,” said Pereira’s son Man­oel Filho during a visit to Agripastos farm in April. “We have very shallow, very poor soil with low fertility and hilly topography. My father looked to no till as a solution.”

Today, about 70 per cent of farms in the region are no tilling and 86.5 million acres — more than half of the country’s cropland — gets no tilled in some form.

“In the beginning people thought we were crazy, but now we’re normal,” Filho said, adding his father became a well-known no-till advocate in Brazil, always keeping his farm open to visitors keen to learn more and hosting the country’s national no-till museum.

Pereira first added cover crops for weed control to his no-till land in the early 1980s. Today, cover crops are used extensively with soy, corn, wheat, barley, white bean and sorghum, Filho said. Not only is erosion no longer a problem, but yields on the farm have skyrocketed.

According to Filho, corn yields doubled from four to eight tons per hectare in the first 25 years of no till on the farm, and are close to 10 tons now. During that same period from 1975 to 2002, both soy and wheat yields on no-till fields rose from two to four tons per hectare. 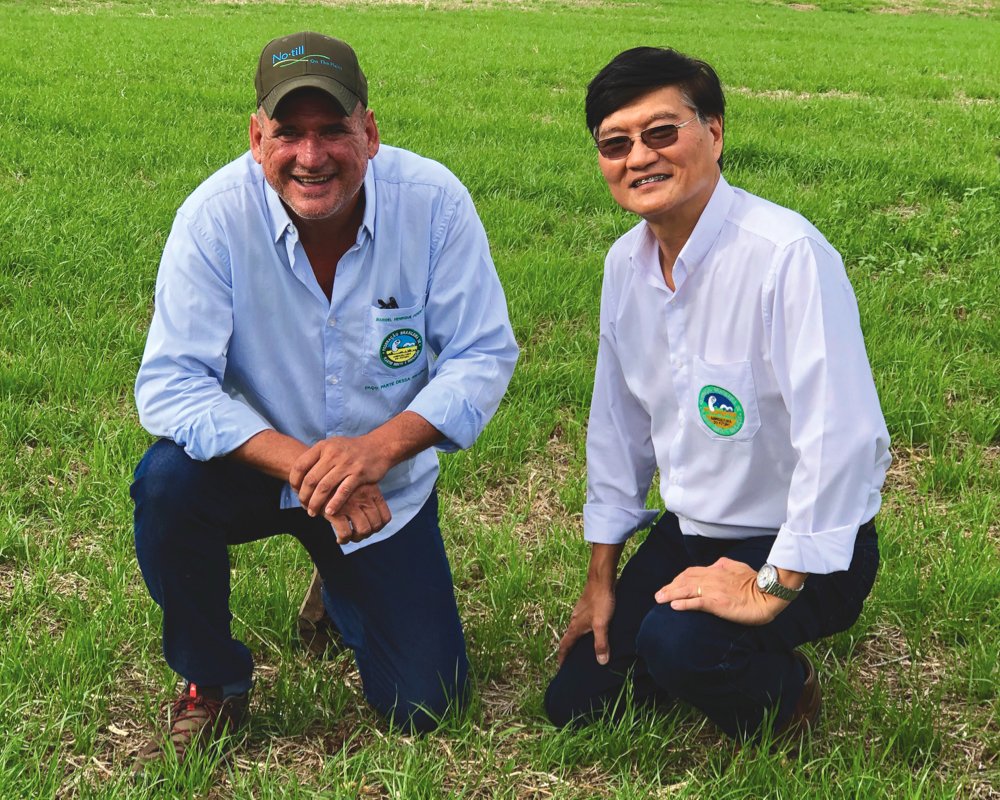 Manoel Filho left and Jonadamn Ma on a field that’s been no tilled for 40 years.photo: Lilian Schaer

A key ingredient is that cattle spend about 120 days on grass before the pasture is given a chance to regrow and a crop like no-till soybeans is planted.

It’s an increasingly common rotation in southern Brazil — in the north, it’s corn that follows pasture — that is helping to bring about 200 million hectares (494 million acres) of degraded pastures in the Cerrado, a vast tropical savanna region of Brazil, to higher productivity.

“We have about 230 million people in Brazil and 250 million cattle and one animal per hectare is very bad land use,” said Jonadan Ma, president of the Brazilian Federation of No-Till Farming who no tills 7,400 acres in the nearby state of Minas Gerais.

“We can have two to three times the production without using more land,” he said, adding it will slow the need for deforestation and lower CO2 emissions.

The development of early season corn and soybean varieties and planting corn after soy has dramatically changed the importance of Brazil’s famous second crop, called safrinha, and has helped integrate livestock and cropping.

According to KWS corn breeder Luiz Pires, more than 70 per cent of Brazil’s corn is now safrinha and an extra 200,000 hectares of corn are expected over the next five years — because cattle producers are rotating the crop through their degraded pastures to boost the health, fertility and water-holding capacity of their land.

Under Brazil’s 2006 Soy Moratorium, Cargill and other major commodity buyers stopped buying soy from deforested lands in the Amazon. Increasingly, deforestation is a focus of sustainability standards imposed by exporters in other regions too.

Brazil’s no-till farmers’ federation was established in 1992 and has been working extensively with farmers, research centres and universities to advance no till in the country.

“The consciousness of the farmer is growing,” Ma says, adding that since he started using no till 30 years ago, he’s been able to reduce his fertilizer use on corn and soybeans by two-thirds.

“Erosion control, weed control and higher organic matter, this is all free — no till is free and you have all these benefits,” adds Filho.

This article appeared in the September 2019 issue of the Corn Guide. Lilian Schaer visited Brazil in April 2019 as part of the International Federation of Agricultural Journalists’ Exposure-4-Development tour.