Putting Quorum Sensing to Work in Your No-Tilled Soils

If you've ever been to a meeting that requires a quorum — a minimum number of representatives attending in order to make a decision, you’re on the way to understanding  “quorum sensing” as it relates to soil health.

In the soil microbial world, quorum sensing refers to density-dependent, collaborative behavior — in other words, microbes are going to get their act together and make a collective decision, like fix nitrogen for a plant, when there’s enough of them.

Jones has been studying quorum sensing in the soil microbiome, a process that enables multi-species crops and pastures to function more effectively than monocultures. She believes quorum sensing will become key to harnessing the power of microbes to produce more nutrient-dense food and improve water retention in soils, making them more resilient and productive.

Although scientists have long known microbes can turn genes on and off and transfer genes sideways into other organisms, they’ve recently discovered microbes — whether they’re in the human gut or in soil — can also affect the genetic expression of their host.

“It’s easy to understand why quorum sensing is vitally important in the context of human health. If there aren’t enough microbes of certain types to reach a quorum in our gut to support, for example, genes responsible for immune function, or making B-group vitamins, then that function gets switched off,” she says. “If we want to reactivate those genes, we have to have a quorum of microbes in our gut that are going to turn those genes back on.

“For a long time we’ve been attempting to select plants or animals for traits that we find desirable,” says Jones. “What we didn't realize is that if we change the soil microbiome around plant roots, we can switch on a whole lot of genes that we didn't even know existed, and make quantum leaps in the resilience, productivity and nutrient density of those plants, and therefore in the health, growth and productivity of animals we are raising on those plants.”

Quorum sensing is density dependent, coordinated behavior that occurs in bacteria, archaea, fungi and viruses. “All of the microbes that have been examined to date utilize quorum sensing,” says Jones.

“You only have to look at the way a virus can invade your body,” says Jones. “You can’t see a virus without very high magnification, so how can something so small overpower your body? They do that through quorum sensing.

“You might just breathe in a few bits of viral DNA. Not enough to overpower a human body,” Jones says. “If your body knew they were there, it would attack them. They are totally benign to begin with — until there is enough of them to reach a quorum, then they change their genes and become virulent.”

Virulence and pathogenicity in bacteria, fungi and viruses is density dependent. But how do they know when they’ve reached a quorum and can change their genetic expression? They produce a chemical signal called an auto-inducer, Jones says. 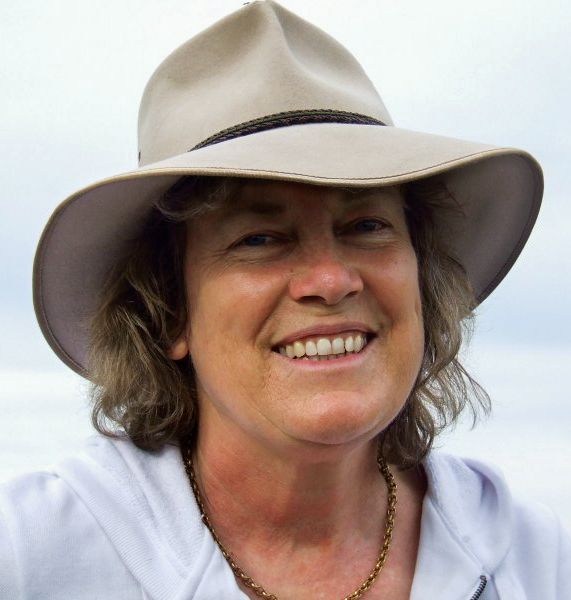 “A whole lot of genes in plants and soils have been switched off because we don’t have the microbial diversity that, a couple hundred years ago, would naturally have been there…”— Christine Jones

As well as having their own language, microbes are multi-lingual, so they can communicate with other species. By detecting biochemical signals microbes can determine how many different plants are growing in a particular soil, and how many functional groups are present. Microbes use quorum sensing to decide who is going to do what, and how they’re going to achieve what it is that they’ve set out to do.

“It’s not unlike the communication in our bodies, with all the different organs: the heart, kidneys, spleen, adrenals, pituitary, hypothalamus, etc., communicating through biochemical signals,” says Jones. “The same thing is happening in the soil. Different functional groups of microbes are behaving in a coordinated fashion like the organs in our bodies.”

For quorum sensing to work in a way that benefits soils, it’s important to have a wide diversity of plants so there’s enough diversity in functional groups for single-celled microbes to work together collectively and function like a coordinated multi-celled super-organism.

“A whole lot of genes in plants and our soil have been switched off because we simply don’t have the microbial diversity that a couple hundred years ago would naturally have been there,” says Jones. “All of the genes in plants, animals and people, can be influenced by quorum sensing.

“This is what’s really extraordinary — that the microbes in you and on you, in and on your plants and in your soil — can affect the genetic expression of all the living things in that environment, in the embedded and surrounding microbial, plant and animal populations.”

The Job at Hand

In broad-brush terms, says Jones, we know that if all plants were eliminated, there would not be support for most other life forms on earth, especially life underground.

“If we eliminate plants we’re going to disrupt the underground web of life and there won’t be anything good happening in the soil,” she says. “The presence of year-long, diverse ground cover is the most important factor in soil health, but we didn’t realize how important the diversity aspect was.”

A diversity of plants will support the microbes that create well-structured and viable soil, with high nutrient states and water-holding capacity — but only under certain conditions, she notes.

You can tell quorum sensing is at work when there’s a lot of soil sticking around plant roots, which is called a rhizosheath.

“Coordinated microbial behavior produces sticky substances that glue soil particles around the roots and create an incredibly fertile, productive environment with extremely high populations of microbes living there,” Jones says. “Inside the rhizosheath there are a lot of biochemical processes taking place that can’t take place outside of the rhizosheath.”

For more information on the connection between quorum-sensing processes and its place in addressing issues with climate change, go to no-tillfarmer.com/articles/8997.

Once microbes have created this rhizosheath structure they can fix nitrogen (N), and Jones says any plant on the planet can fix all the nitrogen it needs provided that it has formed a rhizosheath. She adds quorum sensing helps explain how some biostimulants improve plant health, even at very low concentrations.

“Effects are more pronounced when two or three different types of biostimulant are combined at one half to one third the recommended rate,” says Jones. “The multitude of biochemical signals mimic plant and microbial diversity, resulting in the production of growth stimulating and plant protection hormones.”

Jones cites an example in Western Australia on soils with extremely low fertility. Farmers Ian and Dianne Haggerty grow thousands of acres of wheat every year without any synthetic fertilizer. They apply a biostimulant to the seed to activate the microbial community to create rhizosheaths around the wheat plants’ roots and fix the N and solubilize the P that plants need to grow. “They’ve achieved a quorum of microbes because they’ve created the environment for it,” says Jones.

The Haggerty’s soil was hard and virtually impenetrable, but now their soil is aggregated so air, water and microbes can easily move through. Plant root exudates help that to happen and can build soil carbon 5 to 30 times faster, Jones says, than carbon derived from above ground biomass, like crop stubble residues.

Jones has also found seed-placed nitrogen and phosphorus are unnecessary and, in fact, detrimental in a system where quorum sensing is functioning.

“Below the seeds [that had seed-placed nitrogen and/or phosphorus] the roots had no rhizosheaths, so there was no quorum being formed under those wheat seeds,” says Jones. “The roots that developed from the crown of that plant, above the seed and above where the high-analysis fertilizer was placed, had rhizosheaths.

“That’s powerful evidence that under the seeds is the worst place you could possibly ever put high-analysis fertilizer,” Jones says.

Quorum Sensing and You

“If we look historically at the changes we’ve made, pretty much everywhere in the world we’ve moved from a green, covered landscape where we had great soil underneath that ground cover. We’ve lost farm productivity, soil health, landscape function and climatic stability by either over-grazing, cultivating or spraying out the groundcover.”

This article is the second in a series looking at how regenerative soils can help no-tillers and strip-tillers be more profitable. For parts 1, 2 and 3, click on the article below:

Learn how to accelerate productivity by focusing on soil health.

Discover how soil microbes work together and make decisions.

Explore the economics of running a regenerative farm operation.

A Lesson in Quorum Sensing, and What Matters in Your Soils

Is Glyphosate Harming Your No-Tilled Soils?