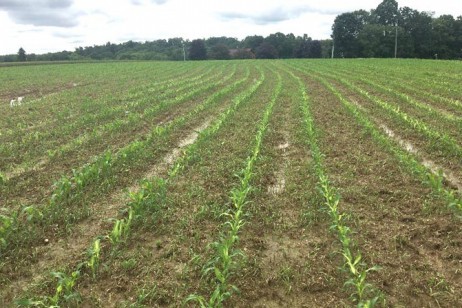 Corn that shows symptoms of sulfur deficiencies in a wet field.

Over the past year, historic rainfall has occurred in many areas of the state. In saturated soils denitrification is the major cause of nitrogen loss. There are numerous fields with yellowing symptoms, most showing characteristic N deficiency. Soil drainage will affect this; obviously the higher up slope areas will affect the number of days the soil is at a saturation point. In reading an article from Iowa State, soil nitrate is converted to a gas by soil bacteria (denitrification) in as little as two days of waterlogged soils. Researchers (several universities) estimate about 4% loss of nitrate for each day of saturation. 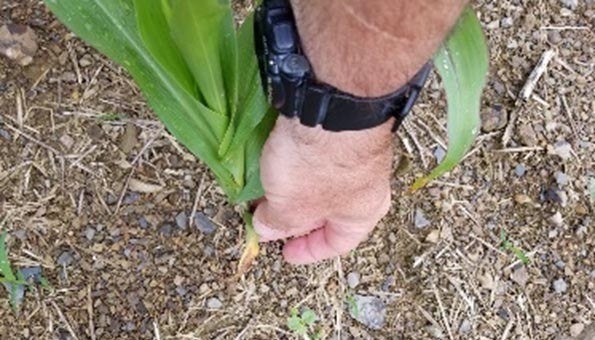 Wet soils cause nitrogen losses. In cases where high intensity rain results in high runoff, leaching losses will probably be low. The primary nitrogen loss mechanism in saturated soils is denitrification, which occurs when soil nitrate nitrogen (NO3-N) is converted to nitrogen gas by soil bacteria. Two to three days of soil saturation is required for bacteria to begin the denitrification process.

Well-drained upland soils that have been wet from a series of rains probably have not experienced much denitrification. Soils in lower landscape positions that stay saturated longer will likely lose more N. This season I had some fields with compaction that limited root growth into N rich soils. In an extreme case, illustrated in the picture, the pipeline severely impacted the roots due to compaction and nutrient uptake. While the whole field was treated the same, with regarding N, the impacted area could not reach the N applied at the time. We utilized a small application of N for plant growth without having to apply the total N demand, based on the grower’s initial application.

Losses can be calculated by estimating 3 to 4 percent loss of fertilizer NO3-N for each day of saturation. Use the Table below to determine how much fertilizer NO3-N was in the soil. Dr Chad Lee reported the following table in his Kentucky Extension Blog. It illustrates the nitrate conversion over time based on the material selected by growers the result of loss will be different. 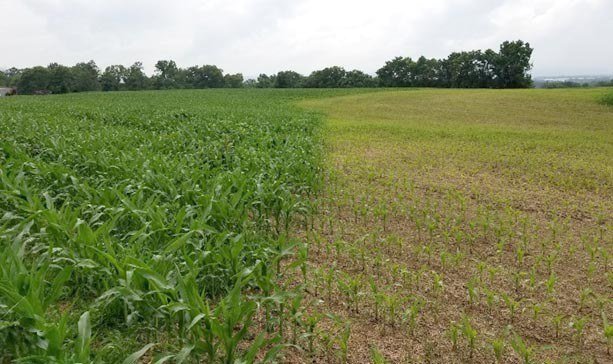 The corn on the left (dark green) is healthy unaffected growth corn, while the corn on the right (yellow) is affected by compaction and unable to intercept the nutrients it needs.

*Nitrification inhibitor that slows transformation of ammonium to nitrate.

I am using Dr. Lee’s lead to use an example for our PA soil conditions.

A farmer applied 150 lb nitrogen (N)/A as UAN to corn grown on poorly drained soil. Immediately after application the field became saturated for 10 days. How much N was lost?

Step 2. Determine the amount of N lost.
Remember that two days are needed for the bacteria to begin the denitrification process. Therefore, denitrification occurred for eight days (10 days total saturation minus two days to start the process). With 4% lost each day for eight days, 32% would have been lost. 120 lb N x 32% = 38.4 lb N lost and 111.6 lb N remaining. Take note that in most cases, the N loss is not as high as the grower might assume given the rainfall.

If a commercial source of N is used as the sole source the grower then needs to calculate the losses as above example or use the PSNT to determine additional N requirements. Most growers using Manure N source should consider some of the following options. 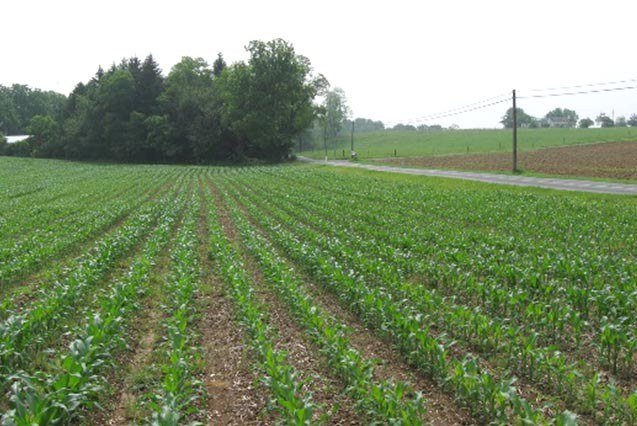 There are only two ways to side dress with minimal effect on the standing crop. Broadcast Urea and/or side dress Urea and/or UAN. I am aware of some specialized spreaders that track with the rows of corn and some tractor mounted spinners as well that will aid in the clearance over taller corn. Expect some burn from urea over the top but in most cases it is minimal. However, UAN over the top will result in significant burning and thus requires side dressing.

What about N stabilizers? This can be an option for urea treated with a urease inhibitor but in general with the need for rapid conversion it is wise to avoid any the other materials that may lessen the available N.

How late can I apply N? Dr. Sawyer from Iowa State Extension had written this in a bulletin regarding timing. “It is best to get the N on as early as possible. However, yield responses that return income greater than the costs for application and fertilizer materials have been observed for N applied up to and slightly beyond the tassel stage. The magnitude of yield increase is dependent upon the severity of N deficiency and the ability of the crop to recover and respond to applied N (the growth and yield potential left after water damage and early season N deficiency). Any surface application is dependent upon rainfall to move applied N into the root zone, otherwise it cannot benefit the corn crop”

Nitrogen Broadcast Prior to Rain – Dr. Lee had this to report regarding N applications prior to heavy rain. “Farmers sometimes broadcast fertilizer nitrogen on a field within 24 hours of a heavy rain. In most cases, very little nitrogen is lost to runoff, especially if the field was under no‐till soil management. The nitrogen fertilizer begins to dissolve almost immediately after being applied to the soil surface and will dissolve completely in a short period of time. As rain begins, the first water that falls moves into the soil, taking most of the fertilizer nitrogen with it. Once in the soil, most of the fertilizer nitrogen is protected from runoff. The only exception is a very intense rain soon after application that also erodes topsoil from sloping areas. Even in this situation, the loss would probably be less than one third of the fertilizer applied.”

In-season Nitrogen Management for Corn in 2019