How to Identify Common Stalk Borers and Thresholds

As corn is being planted throughout South Dakota, it is important to remember that there are insect pests capable of injuring young, vegetative corn. One such pest is the common stalk borer, which is native to South Dakota. Although common stalk borer outbreaks are sporadic, when present in high numbers they can cause significant yield loss. Common stalk borer caterpillars injure corn when they feed on leaves and tunnel into stalks of corn during the early vegetative growth stages. Common stalk borer feeding typically occurs around the edges of cornfields, especially fields that are next to fences, waterways, terraces or ditches.

Adult common stalk borer are small, brown moths. The front wings are typically gray-brown in color with a few clusters of small white spots and span approximately 1 to 1.4 inches. Common stalk borer caterpillars are distinctive and easier to identify than the adults. Caterpillars have solid orange head capsules that have a single black stripe along each side (Figure 1). Younger caterpillars have a distinctive purple-brown band, sometimes referred to as a “saddle”, behind their true legs that extends to the second pair of abdominal prolegs. The purple-brown band is distinctive during the early stages of caterpillar development, but this band fades as caterpillars age. The latter part of the abdomen is cream in color. Fully developed caterpillars are 1.5 to 2 inches in length. 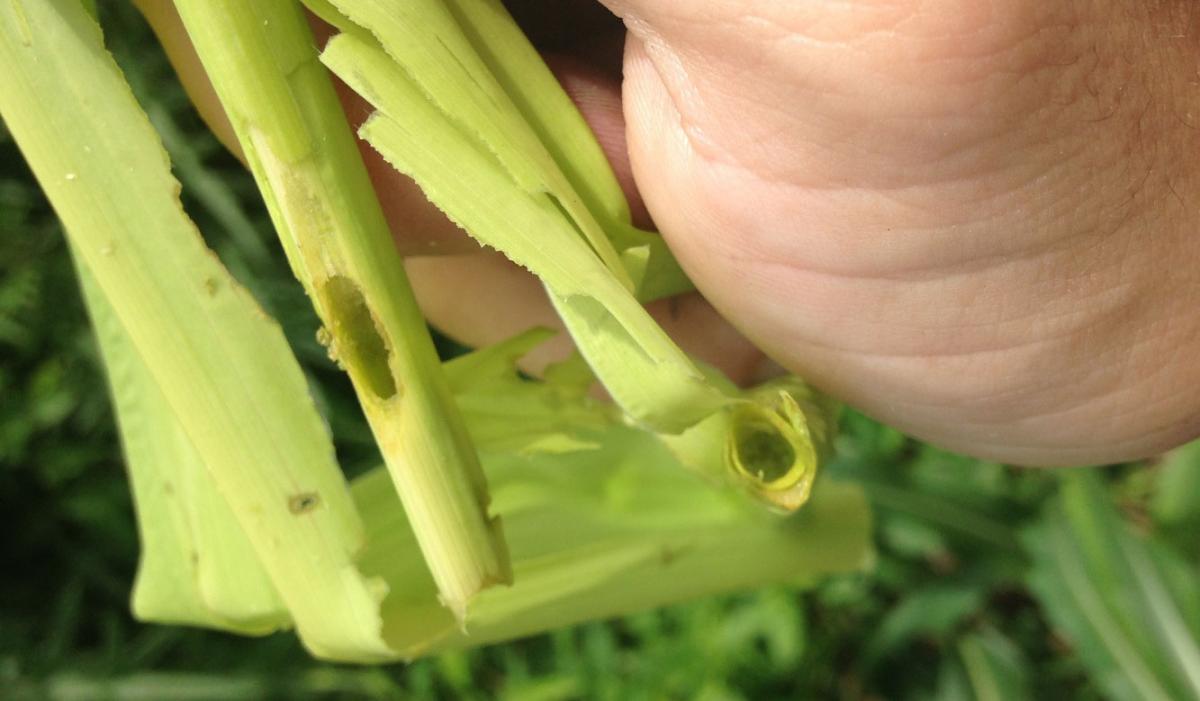 Common stalk borer caterpillars injure corn when feeding on early developmental stages (VE through V5). Infestations are typically observed in the first 4 to 8 rows that are adjacent to grassy areas. Although caterpillars feed on corn leaves, stalk tunneling is the principal cause of yield loss (Figure 2).

Feeding on the corn leaves results in ragged holes that are often accompanied by a sawdust like substance around them (Figure 3). Stalk tunneling can delay corn development, resulting in deformed plants and reduced yields via poor pollination and smaller ears. If caterpillars feed on the growing point of the corn, they can cause a condition known as “dead heart”, where the corn plant will stop growing, wilt and eventually die. As corn plants develop, they are more capable of tolerating common stalk borer infestations, and the caterpillars are less likely to feed on the growing point.

Timely insecticide applications that target either newly hatched caterpillars or their migration from grasses to corn can effectively reduce common stalk borer populations and subsequent feeding. Insecticides applied between 575- and 750-degree days will reduce common stalk borer caterpillar by 50 to 80%, however, this approach does not account for the population size and could result in unwarranted insecticide applications. 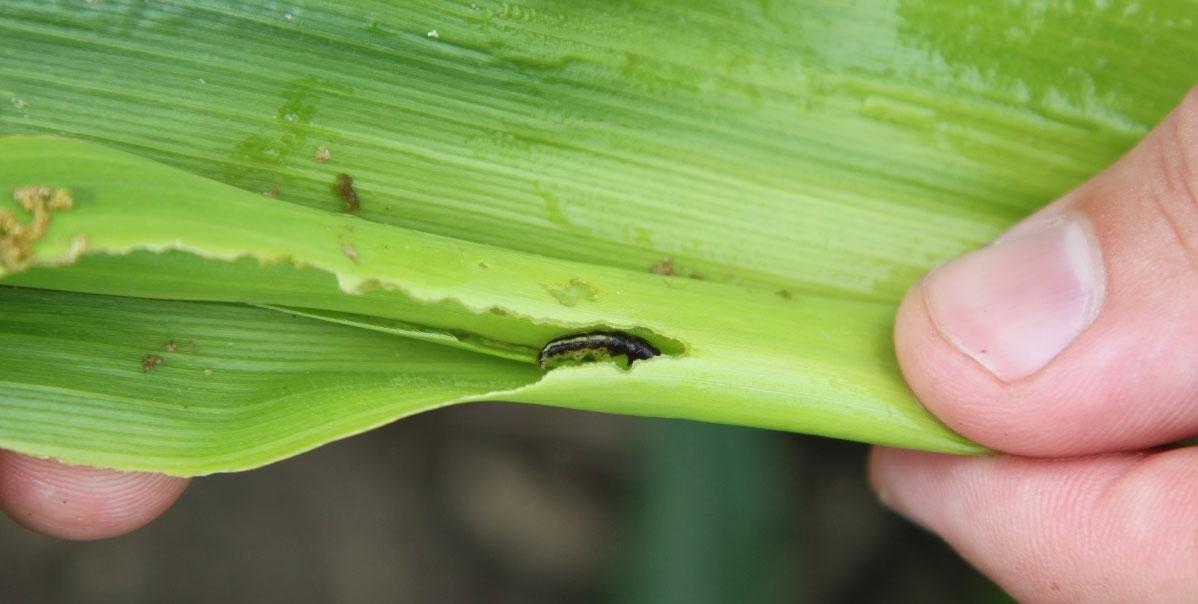 Economic thresholds are established for caterpillar migration from grasses into adjacent cornfields (Table 1), although these require scouting corn plants to confirm caterpillar movement. Scouting should occur between 1,300- and 1,400-degree days, and corn bordering grassy areas should be searched for caterpillars within the whorls (Figure 4). To scout for common stalk borer caterpillars, walk in a “Z” or “W” pattern in the first 8 rows near grassy field margins and randomly select 30 plants. Examine corn leaves for signs of leaf feeding and unfurl the whorls of injured plants to search for caterpillars. Divide the number of injured plants by 30 and then multiply by 100 to calculate the percentage of infested plants. Use Table 1 to determine if an insecticide application is economical for the infestation level observed.

How to Identify Different Pigweed Seedlings