For Waco, Neb. no-tiller Scott Gonnerman, less is more when it comes to fertilizer, insecticide and residue disturbance, setting the framework for generations to come on his family-run operation.

Innovation can take many forms in agriculture. For Waco, Neb., no-tiller Scott Gonnerman, simplicity and tradition are his chosen pathways to progress on his 250-acre operation.

The latest data-collecting gadgets or the next cutting-edge planter aren’t on his wish list. His current one, he notes, is doing the job just fine.

Higher on the list of Gonnerman’s priorities is the sustainability of his soil, which he intends to pass on to his grandson in continuation of a family–run operation dating back to 1918 when his own great grandfather purchased the land.

Find out more about Scott Gonnerman’s soil-building and cover cropping strategies, including his roller crimper investment to terminate weeds and eliminate herbicide use: www.no-tillfarmer.com/gonnerman

After decades of conservation tillage on his corn and soybean operation, Gonnerman transitioned to no-till in 2008, adding cover crops in 2009.

As a firm believer in building biodiversity for long-term soil health, Gonnerman leaves his ground completely undisturbed, including any residue from his corn-soybean-small grain and cover crop rotation.

“Soils are built from the top down, so any time we disturb the top of the soil, we’re limiting its ability to restore its natural function,” he says.

When it comes to measuring success, Gonnerman values efficiency over volume, as reflected by his yearly statistics on corn. Average bushel per-acre yields in his region fall between 250-275, compared to Gonnerman’s 200-220.

“There will be a time we’ll see our soils get too degraded if we lose too much of our biology. It won’t matter how many nutrients we put on. We won’t be able to raise an outstanding — or even decent — crop...” — Scott Gonnerman

Yet his advantage comes through production costs, totaling just $2.26 per bushel in 2017of corn compared to averages of $3.75 or more in his region.

Gonnerman credits a combination of no-till, cover crops and minimum fertilizer application needs for his lowered costs per bushel. For the past 7 years, he has eliminated the use of insecticide and fungicide while also transitioning to 100% non-GMO seeds.

The seed costs alone have proven pivotal, as GMO varieties can reach $275 per bag compared to $150 for a typical non-GMO counterpart.

With the expectation of most species winterkilling Gonnerman anticipates several species, including lentil, vetch, barley and some turnips being able to survive into spring and provide the soil with nutrients, weed suppression and water availability.

Since combining cover crops with no-till, his organic matter content totals have risen from about 2%-3.5% on average. Yet the key factor is the coinciding rise in soluble carbons, which he notes as necessary for organic matter to serve any long-term benefit to soil health.

“Within my soil, organic matter acts as my ‘house,’ while water soluble carbons act as the ‘food’ source for my soil biology,” Gonnerman explains. “I can have a big house, but if I don’t have a lot of food, I won’t have a lot of workers. I’m less interested in the size of my ‘house’ than the amount of ‘food’ on-hand to keep everything running.” 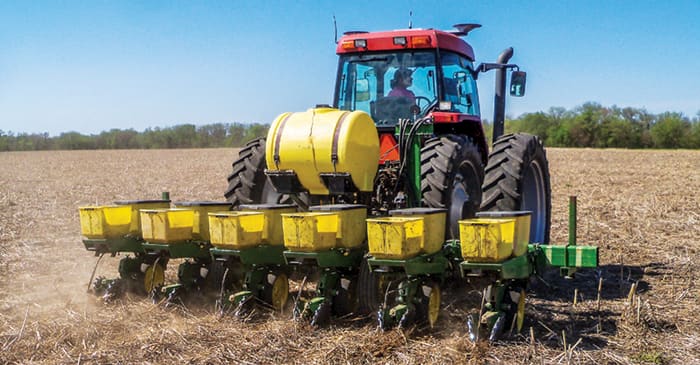 The variety of cover crops plays into Gonnerman’s objective of crop diversity, creating a habitat for beneficial insects to complement his elimination of fungicides and insecticides. Starting in 2019, Gonnerman plans to implement a fourth primary crop into his rotation, yellow field peas, to diversify his cropping system further. He hopes this addition will help combat persistent weeds and reduce the need of herbicides.

“Right now we plant corn every three, years, but buy extending it to four, we’re breaking the cycle far enough that a lot of insects that live off the corn plants won’t be able to survive that long without a corn plant to feed off,” he says.

Benefits extend to water infiltration on Gonnerman’s acres as well. On his toughest sloping clay soils, Gonnerman says the infiltration rates improved from 0.5 inches per hour with conventional tillage, to 2 inches per 7 minutes in 2016 through NRCS testing. Testing done in June 2018 show 1 inch infiltration in 25 seconds and the second inch in 1 minute 35 seconds.

The improvement enables Gonnerman to cut back on irrigation investments significantly. Last season, Gonnerman applied 0.65 inches of water per acre with his center pivot on soybeans and 1½ inches per acre on corn, which he speculates to be about a quarter of what his neighbors applied to irrigate.

“Some of that is due to our zero disturbance, but the bigger part is our plant diversity, getting more living roots in the soil,” he says. “Then when they decay, it lets the air out of the soil so the water can go in. That’s been a major benefit in reducing our input costs as far as irrigation goes.”

In addition to water infiltration tests, Gonnerman works with Ward Labs in Kearney, Neb., for soil and plant tissue samples several times per year, providing him with multiple benchmarks and nitrogen (N) recommendations for his crops. This method allows Gonnerman to take advantage of the mineralization of nitrogen by his soil biology during the summer.

Gonnerman’s strategy after reviewing the results is to place just enough N for the plant to be categorized as “sufficient” on lab scales. By doing so, he’s certain that plants will absorb the N being applied, minimizing leaching potential.

“Soils are built from the top down, so any time we disturb the top of the soil, we’re limiting its ability to restore its natural function...” — Scott Gonnerman

Aiming on the lower end of N recommendations has enhanced yields and doubled as an insurance policy in unfavorable growing seasons. On his irrigated corn, Gonnerman averages over 2 bushels of corn per pound of N, compared to regional averages of 1 bushel per pound.

“One third of our yield depends on nature. I’ve raised 250 bushels of corn per acre before while only fertilizing for 175,” he says. “On the other end, if we don’t have a good year like in 2012, I’m not out so much for my inputs either because I didn’t invest so much into them.”

Gonnerman admits the decision to eliminate fungicides, insecticides and significantly cut back on N with no-till was difficult at first, but the short-term sacrifice culminated in healthier, longer-lasting soils that don’t require as many commercial inputs.

It’s a difficult investment for many farmers to justify, he adds, considering the commonality of farm leases lasting only 1-3 years. The pressure to produce right away often leads those who try the natural soil health approach to revert back to a high-input system for fungicide and fertility.

“It took 5-6 years of cutting back on my nutrients to notice a big change. A lot of people will do it for one, two or even three years and say, ‘Well this isn’t working, I’m going back to tillage,’” he says. “Just about the time they were starting to get through the toughest years of it, that’s when they switch and go back.”

Gonnerman believes he’s given his grandson and the generations beyond the opportunity chance to make a living off of the farm should they follow his blueprint.

“I think there will be a time that we’ll see our soils get too degraded if we lose too much of our biology,” he says. “It won’t matter how many nutrients we put on. We won’t be able to raise an outstanding — or even decent — crop.”

Navigating Through a Soil Health Assessment