Soybean growers and their advisors are faced with a bewildering array of information, from many sources, about products and practices that might increase yield and profits. Management of soybean diseases is no exception.

Foliar fungicides are valuable soybean disease management tools, says Bruce Potter. However, when applied in the absence of controllable, yield-limiting plant disease, they are typically not a profitable input.

The following discussion is not intended to cover early season seed, seedling and root pathogens or Sclerotinia white mold which will be discussed in a subsequent article.

Each growing season, we receive questions on the benefits of foliar fungicide applications to soybean and whether a pesticide treatment will pay, says the University of Minnesota ICM specialist. Although these questions may seem simple, the correct answers often are not.

Some of the reasons that interpreting and assigning economics to disease management research results include:

Studies we are doing to answer these questions

Standardized studies are being done over a wide geography and over a number of years to provide soybean farmers and their advisors with data to better understand the odds for a return on fungicide investments. This Minnesota Soybean Research and Promotion Council funded project hopes to add to this knowledge base for Minnesota soybean producers.

Study sites were located at University of Minnesota Research and Outreach Centers at Lamberton, Waseca, and Rosemount in 2016-17 with Morris being added in 2017 and Crookston in 2018.

This project looks at several of the factors involved in the economics of foliar fungicide applications:

By planting varieties susceptible to specific pests at each location, these studies examined the prevalence of soybean diseases as well as some nematode and insect pests over a range of Minnesota environments.

For three soybean varieties at each location, we compared yields without a fungicide treatment to yields of the same variety treated with two types of foliar fungicide at the R3 stage.

This study is intended to indicate whether or not a yield response was obtained at a study site and why the response may have occurred. This study is not meant to be a comparison of all labeled fungicides or the probability of a fungicide response on numerous soybean genetic lines.

What have we found so far?

There were yield differences among soybean varieties (data not shown). However, varieties responded similarly to fungicide at each site and in both years. 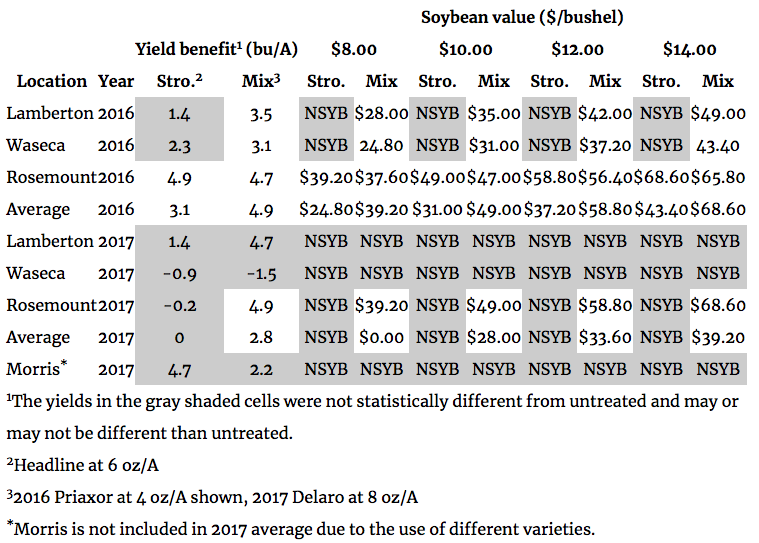 Results from the 2018 locations will be analyzed and combined with previous year’s results. The data will be examined for patterns in disease, weather, and agronomic practices that might help predict soybean yield responses from foliar fungicide applications.

What about white mold?

This article primarily refers to soybean diseases other than white mold. In 2017, yield-reducing levels of Sclerotinia white mold occurred some Minnesota soybean fields. As a result, we are receiving many questions on fungicide applications for white mold control.

Few of the study locations used for this study had detectable white mold and fungicide control of white mold requires different products and application timings than used in these studies. Results from additional MN studies, placed in environments with white mold, will be discussed elsewhere.

What about foliar fungicides on corn?

A similar study, funded by the Minnesota Corn Research and Promotion Council, was conducted at the Lamberton, Waseca, and Rosemount locations in 2017. We did not observe yield differences for post-tassel fungicide applications in these three environments.

The corn studies will include Morris and Crookston locations in 2018.