Increased yields from fungicide application depend on the level of disease severity. How much disease severity develops depends on the environment — mainly moisture and temperature, but also on cultural practices like crop rotation, tillage and susceptibility of the cultivar planted.

The SDSU Extension Plant Pathology program conducted foliar fungicide trials sponsored by the South Dakota Soybean Research and Promotion Council to determine the increase in soybean yields as a result of fungicide application. The trials were planted at the SDSU Southeast Research Farm, Beresford (May 28, 2015) and at the Volga Research Farm (June 2, 2015).

Plot size was 5-by-15 feet and row spacing was 30 inches. Six commonly applied foliar fungicides in soybeans in South Dakota were used in this study (Table 1). The fungicides were applied at R3 (beginning pod) growth stage. Plots were assessed for disease severity (percent plot disease severity on the upper canopy) 28 days after fungicide application. 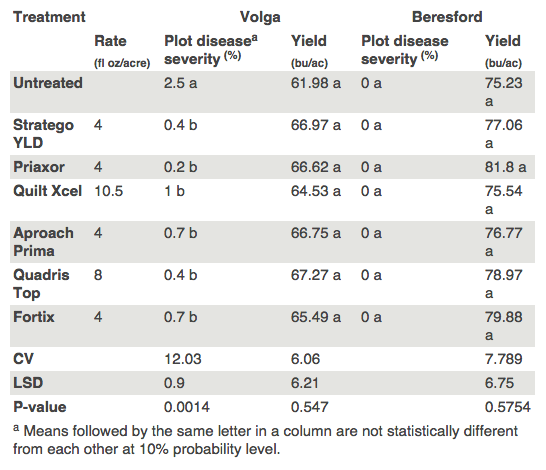 Table 1. Disease severity and yield for different fungicides applied at beginning flowering at two locations in 2015.

This is not surprising given that there was such low disease pressure at both test locations. We did notice, however, at the Volga location where there was some disease presence, all fungicide treated plots had significantly lower disease severity compared to non-treated plots.

The 2015 foliar fungicide trial results are not different from previous years’ data or data from other universities in the region. Yield increase from applying fungicides in soybean is dependent on the level of disease severity. This should be the overriding factor when deciding whether to apply fungicides in soybeans.

Conditions that favor fungal diseases to develop include wet and warm weather, especially around R1 (flower primordia), susceptibility of the cultivar planted, field conditions such as soybean following soybeans, and no-till or conservation tillage. Scouting soybeans at R1 should indicate the amount of disease developing and a fungicide is justified when leaf diseases (such as brown spot, Cercospora leaf spot, downy mildew, and frogeye leaf spot) can be observed on every plant at 5% severity in the middle canopy.

Since conditions vary from field to field, producers are encouraged to setup test strips of treated and non-treated foliar fungicide in their fields to determine if fungicides would be beneficial. Producers interested in setting up fungicide strip trials can contact the SDSU Extension Plant Pathology program at 605.688.4521 or Emmanuel Byamukama for assistance.

How Late Is Too Late To Apply Foliar Fungicides In Corn?