Land rolling is often used in soybean fields in North Dakota and northwest Minnesota, especially in fields with rocks and soil clods or fields with corn stubble. For many years, the practice has been utilized in alfalfa and grass seed production to improve the seed to soil contact, germination and to push rocks into the soil, says Hans Kandel.

For row crops, the main purpose is to improve harvesting efficiency and reduce combine damage. Harvesting soybeans after rolling often results in cleaner beans by lessening the amount of dirt on the beans. Excess dirt on the beans will potentially attract moisture when stored, says the agronomist at North Dakota State University.

Some no-till farmers have seen benefits of using land rollers to deal with excessive corn or other standing residue, while others prefer the standing residue. Rolling a field may also help with the decomposition of the previous crops’ residue especially corn stalks.

Land rolling is most beneficial when done just after seeding the crop, and rolling may increase the seed to soil contact and improve germination. Rolling just after planting may also result in more runoff after a heavy rain or blowing soil during wind events.

It is not recommended to roll soybean or dry bean during the hypocotyl arch stage (VE stage, see graph ‘soybean emergence’) when the crop is just coming out of the ground and the cotyledons are still facing down. The plant can easily break on the top of the “crook”. There are no growing points below the “crook,” therefore, the plant cannot recover and will die.

There is an opportunity to roll soybeans after they emerge, but preferably before the first trifoliolate (V1) growth stage. During these stages, the plants can withstand bruising and can recover from such injuries although a few stems may break or plants may lodge. Damage is less if rolling takes place during the heat of the day when plants are not full of water and crisp. 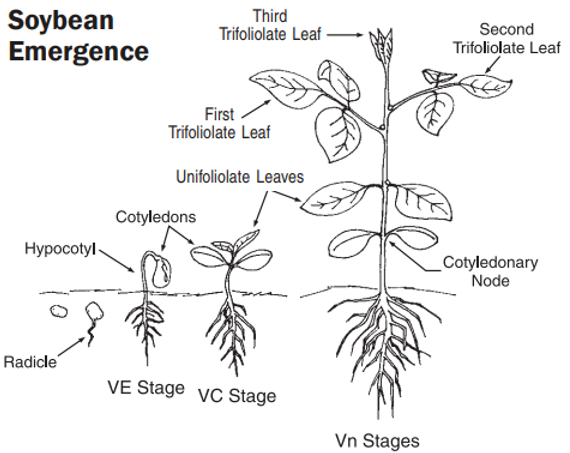 Rolling studies indicated a trend of lower remaining soybean plant population, as rolling was delayed from pre-emergence to the second trifoliolate (V2) growth stage. However, seed yield was similar among the unrolled check and all rolling treatments.

Land rolling in North Dakota can also be used for dry bean, pea, lentils and chickpea. Research on dry bean (and upright Pinto) and field pea in Manitoba found that there were no significant differences in plant density and yield between no rolling (the check treatment) and rolling immediately after seeding or rolling after the hypocotyl arch stage, 10-13 days after planting.