Modern agricultural systems focus on specialization and simplification, but we are now experiencing unintended consequences, says Sjoerd Willem Duiker. Rural areas are depopulating as the number of farmers continues to decrease; water quality is under threat as soluble nutrients are leaking to ground and surface waters; soil organic matter has decreased, input costs have escalated and profit margins are small.

It is clear there is a need for new strategies for rural revitalization and environmental improvement. Re-introducing grazing animals on our cropland can be one of these strategies, says the Professor from Penn State University. It will involve some modest investment in infrastructure such as fencing and water supply, but it can add a new income stream to the farm while potentially improving soil health.

Grazing has been shown to be a very cost-effective method to feed animals. Additionally, new grazing strategies involve frequent movement of animals and this can be an opportunity for new employment in rural regions. 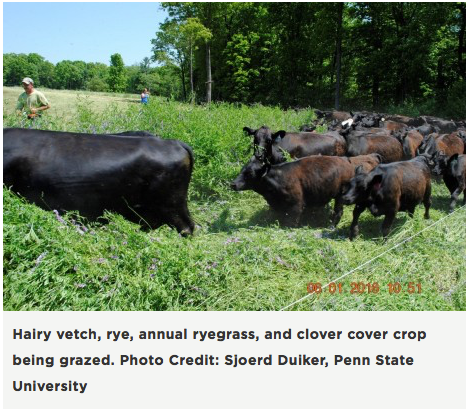 One of the concerns with grazing cropland is the compaction caused by the animals but several studies have shown that this concern is overrated. That is not to say that grazing animals do not cause compaction. Their hoofs can exert as much or more pressure on the soil surface as heavy pieces of farm machinery.

Nonetheless, there are important differences. First, grazing animals rarely cause compaction below 3-4 inches, while farm machinery with axle loads exceeding 10 tons can compact the subsoil. This is important because biological and physical forces are most active near the surface of the soil to increase the resistance of soil to compaction as well as remediate it after it has been caused.

Root density is highest near the surface of the soil – and roots act as a geotextile making soil resist compaction, while growing roots restore pore spaces in the soil. Soil organisms such as earthworms, bacteria and fungi are equally more active near the soil surface. Some classes of dung beetles, living under dung patties, make tunnels near the surface.

Freeze-thaw cycles and wetting-and-drying cycles, more frequent near the soil surface, have been shown to create new pore spaces. In continuous no-tillage, the surface soil becomes more resistant to compaction because of high organic matter content and surface crop residues.

In a study in Ga., cover crops of rye or pearl millet were grazed in fall or summer in rotation with grain crops under no-till management. Compaction effects were only measured in the top 3” of the soil. The researchers measured slight but inconsequential increases in bulk density. Infiltration rate decreased only after grazing of pearl millet but not after rye. Penetration resistance increased somewhat in the top 4 inches due to grazing. However, the effects of grazing were small and dissipated after a rest period, leading the authors to conclude that grazing the high-quality cover crop did not cause substantial damage to the soil.

Similarly, corn residue was grazed in fall or spring in a corn-soybean rotation in Nebraska. Cattle grazing did not affect bulk density, soil aggregate stability, particulate organic matter, soil organic carbon and nutrients except calcium and sulfur. Although spring grazing, at a higher stocking rate than fall grazing, increased penetration resistance, it never reached yield threatening levels. There were indications that microbial biomass was positively affected by grazing. Crop yields were not affected by grazing in this 16-year study.

Finally, in a study in northern Florida, rain-fed cotton yields increased 17% with grazing. The rotation was two years of bahia-grass, one year of peanut and one year of cotton. Cattle grazed cover crops of oats/rye in the winter. Bulk density was reduced due to grazing in the top 2 inches only, while microbial biomass carbon more than doubled in grazed rainfed plots compared with non-grazed plots. Significantly higher levels of extractable phosphorus, exchangeable potassium and acid and alkaline phosphatases were observed in the grazed compared with the non-grazed plots.

The authors found evidence that root length and surface area increased due to grazing. Over the past three years we have followed three farms in Pennsylvania (two beef, and one dairy) who successfully integrated grazing with no-till crop production. We observed high grazed yields of annual forages. High biological activity in the soils appeared to remediate the effects of compaction caused by the grazing animals. These studies show that with careful monitoring of soil and vegetation conditions grazing can be successfully integrated with annual crop production, especially in no-till systems.