This is an edited version of a report first prepared for Texas Grain Sorghum Association’s “Sorghum Insider” (see other TGSA sorghum tips at http://texassorghum.org/sorghum-tips).

Here we share results of different assessments of grain sorghum hybrids to SCA across the state.  We have observed dramatic results of hybrid tolerance in many trials (Fig. 1).

What will happen with sugarcane aphid in Texas in 2018?—No one can say for certain.  We don’t know.  But we do understand SCA well and that will help us all adjust to what SCA does in 2018, and we are in a far better position than we were in 2015.

Pre-plant Considerations for Potentially Reducing the Impact of SCA 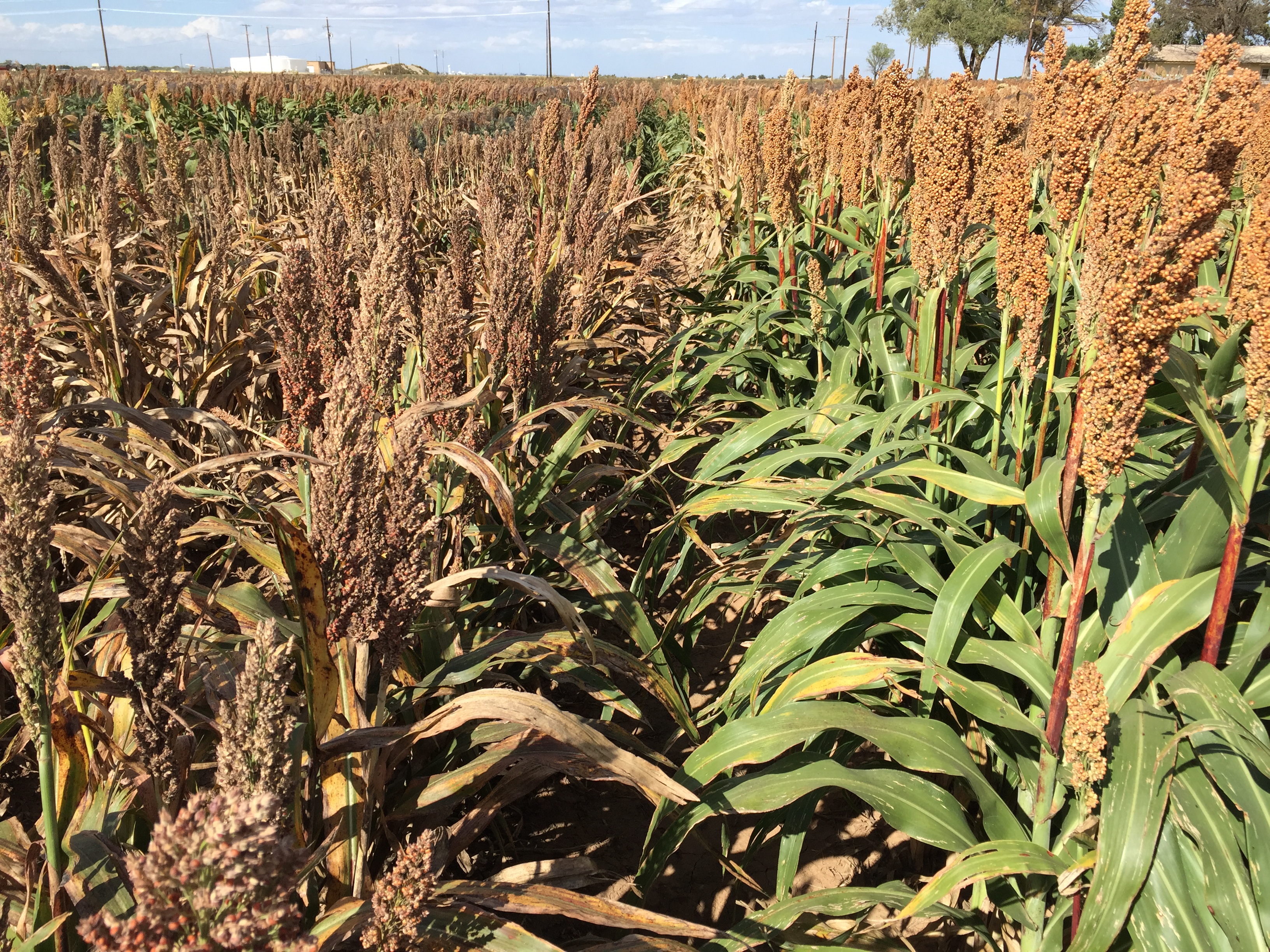 Though most producers will think of insect control measures to involve scouting protocols, thresholds, insecticide choice and timing, method of application, spray carrier volume, and re-scouting, here are early considerations.  We thank Texas A&M AgriLife Extension entomologists for the suggestions: 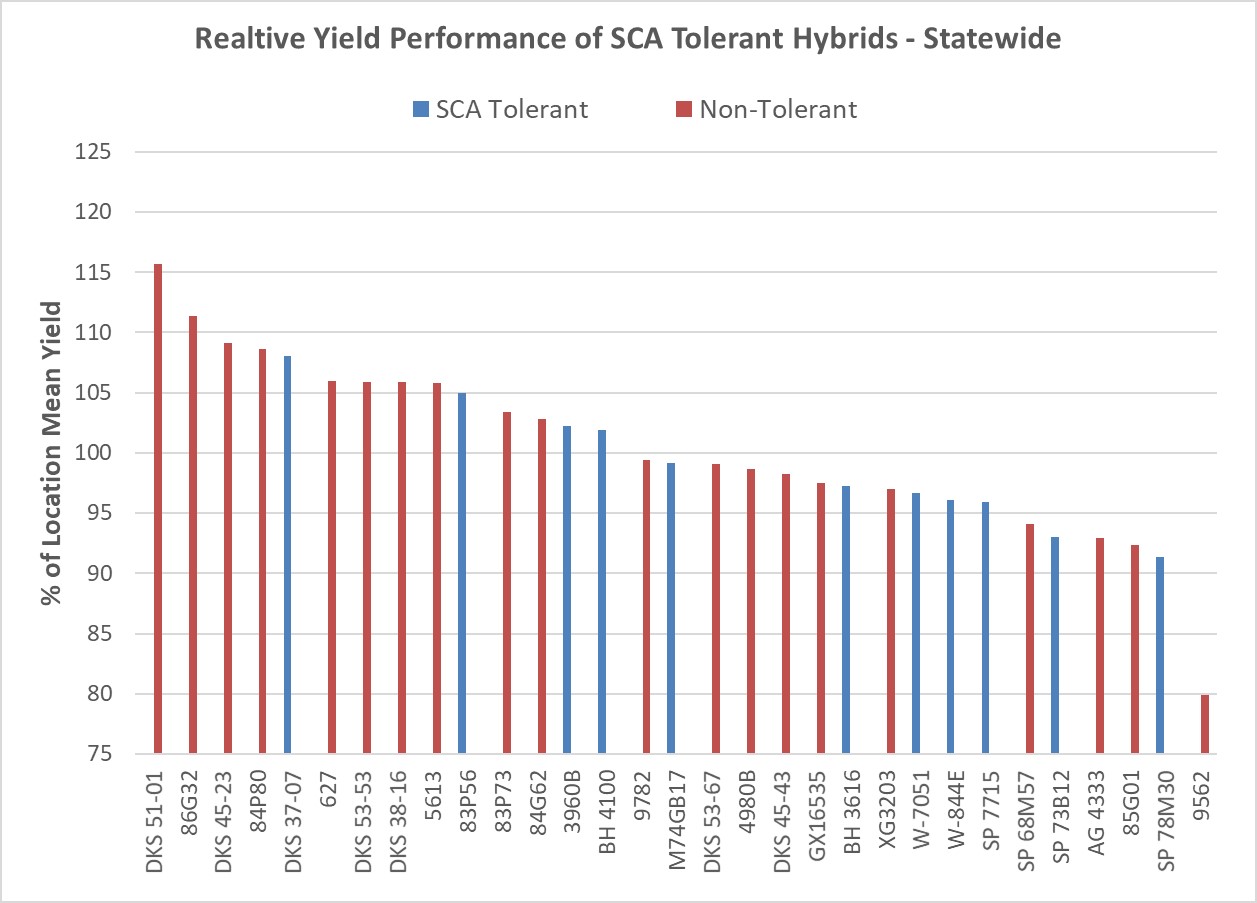 First, the data will be revisited to potentially update High Plains information so watch for more results (contact Trostle).  The criteria for the information below is multiple sites across more than one year where SCA infestation occurred.  Probably the best trials are where sets of replicated plots are maintained under both sprayed (e.g., near aphid free) and unsprayed conditions.  This enables a comparison of the two yields.  Also, in our trials I (Trostle) have certainly noted that some hybrids that were deemed tolerant didn’t look like it, suffering significant damage.  So, know that this is not take-it-to-the-bank assured SCA tolerance let alone resistance.  There are also likely several hybrids that have comparable SCA tolerance but have not been tested enough to document tolerance.

Numerous replicated plot and strip trials, many with weekly counts of sugarcane aphids on lower and upper leaves.

Beginning in 2014, Texas A&M AgriLife Extension and Research, with support from the Texas Grain Sorghum Producers Board, began evaluation of hybrids in replicated field trials to confirm resistance to sugarcane aphid.  Trials were conducted in the Rio Grande Valley, Gulf Coast and north Texas and compared the number of sugarcane aphids and leaf damage among the hybrids and to hybrids known to be susceptible to sugarcane aphid.

These trials confirmed resistance in 14 hybrids from seven different seed companies (Table 1).  This list is not complete and these and other seed companies may have hybrids with resistance to sugarcane aphid.

Results are limited, but initial evaluations (full evaluation by end of March) suggest:

See the Texas Sorghum Assn. “Sorghum Insider” Feb. 20, 2017, for AgriLife entomology’s comments on suggested SCA thresholds above 50 aphids per leaf to as high as 200 aphids per leaf for strongly tolerant hybrids (for central and south Texas, hybrids marked with ‡ have suggested aphid thresholds of 150-200 per leaf).

First Report of Sugarcane Aphid on Grain Sorghum in Kansas

First Reports of Sugarcane Aphid on Grain Sorghum in Kansas