Plant pathologists at Iowa State University and University of Kentucky have confirmed that isolates of Cercospora sojina, the pathogen that causes frogeye leaf spot of soybean, have shown resistance to quinone outside inhibitor (QoI, strobilurin) fungicides in Iowa.

Frogeye leaf spot (Fig. 1) occurs across the United States, and significant yield loss can occur when this disease is widespread within a soybean field. Plant pathologists estimate that this disease was responsible for more than 17.5 million bushels of lost yield, valued at $158.1 million, across the U.S. in 2015. 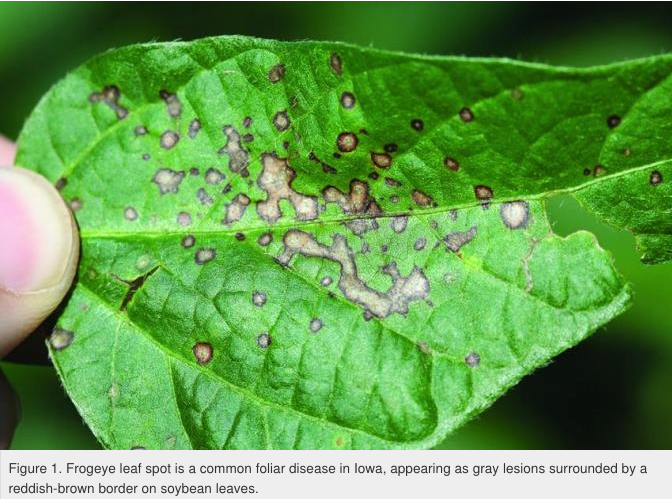 The pathogen that causes frogeye leaf spot is genetically diverse, which is an important reason why fungicide resistance can occur. This genetic variation increases the chance of selecting for resistance. C. sojina resistance to QoI fungicide was first documented in Tennessee in 2010 and has been detected in several other states since then including those that border Iowa. Isolates of C. sojina were sampled from multiple locations across the state in 2017 and were tested for resistance using established laboratory protocols at the University of Kentucky. All samples evaluated were found to be resistant. The C. sojinaisolates from Iowa in 2017 are the first reported to have QoI fungicide resistance in the state.

One method of frogeye leaf spot management and subsequent yield protection has been the application of foliar fungicides during soybean pod development. However, overuse or misuse of fungicides can result in decreased management efficacy if targeted pathogens acquire resistance to a fungicide.

Fungicides are very important for disease management, and it is critical to preserve the usefulness of these crop protection tools. Fields should be scouted approximately two weeks after fungicide application to determine if the fungicide is working.