Pyrethroid Resistant Soybean Aphids: What Are Your Control Options?

We’re receiving an increasing number of reports of pyrethroid insecticide failures for soybean aphid management from northwest and central Minnesota, and northeastern North Dakota this year.

However, many areas of Minnesota and North Dakota still have low, non-yield threatening aphid numbers and scouting should continue to determine when to apply insecticides.

In this article, we review the insecticide groups used for soybean aphid control (Table 1) and discuss the potential role of and challenges associated with insecticide mixtures.

Poor insecticide resistance management of a mobile insect like soybean aphid affects not just your farm, but other farmers as well.

Here are some general recommendations to improve pest management of soybean aphids:

When applying any insecticide for soybean aphid, spray coverage and canopy penetration are critical.

Do NOT retreat a field with the same insecticide group for consecutive applications!

Insecticide group numbers can be found on the label.

Pyrethroids (Group 3A): In light of recent pyrethroid performance issues, it is not advised to apply an insecticide containing only a pyrethroid insecticide(s) in most areas of Minnesota and in northeastern North Dakota.

If a pyrethroid insecticide application may not work well, which insecticides should be considered?

With the widespread pyrethroid failures, this is one preferred option for first applications in a field or when retreating a field that was previously treated with a pyrethroid insecticide.

We do not generally recommend premixes or tank mixes of insecticides. From a resistance management perspective, premixes and tank mixes with reduced rates of one or more insecticides should be avoided. However, such mixtures may be necessary when products with single insecticide groups have already been applied to a field.

Pyrethroid premixes (such as Hero) 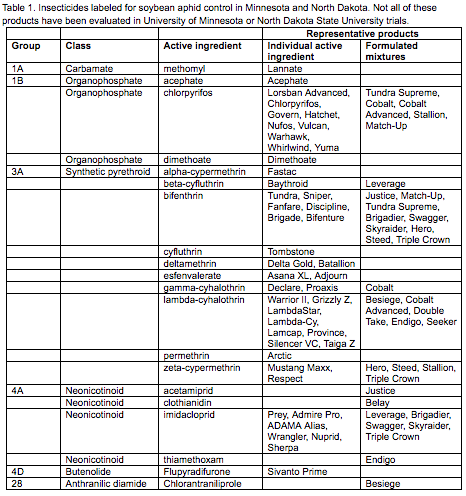 Neonicitinoid premixes (such as Endigo, Leverage)

These premixes would be a preferred option following a chlorpyrifos application.

Organophosphate premixes (such as those with chlorpyrifos - Cobalt, Tundra Supreme, Stallion)

For those wanting to mix products, be advised that there may be compatibility issues when tank-mixing insecticides.

When choosing insecticides, consider the abundance of yield threatening insect pests first. For example, do not base an insecticide choice on non-threatening levels of a secondary pest. However, if dry conditions persist, spider mites could quickly become a real pest concern that will further complicate insecticide selection.