By John Dobberstein posted on April 27, 2017 | Posted in Water Management

Veteran no-tillers John and Alex Young share how strategically adding tile to certain fields has pulled up yields in areas that can be unfarmable in wet years.

While surface drainage may be enough to remove excess water from many no-tilled fields, John and Alex Young know from experience their water issues can’t be solved that way.

Raising corn, wheat and double-cropped soybeans on very uneven terrain near Herndon in southwestern Kentucky, they farm variable soils with high clay content and both fragipans and limestone strata that restrict water movement.

“If you have too much water and you can’t get rid of it, that acre of land is worth just about zero to you,” says John, who ran a tiling company with his wife Beth during the 1970s. 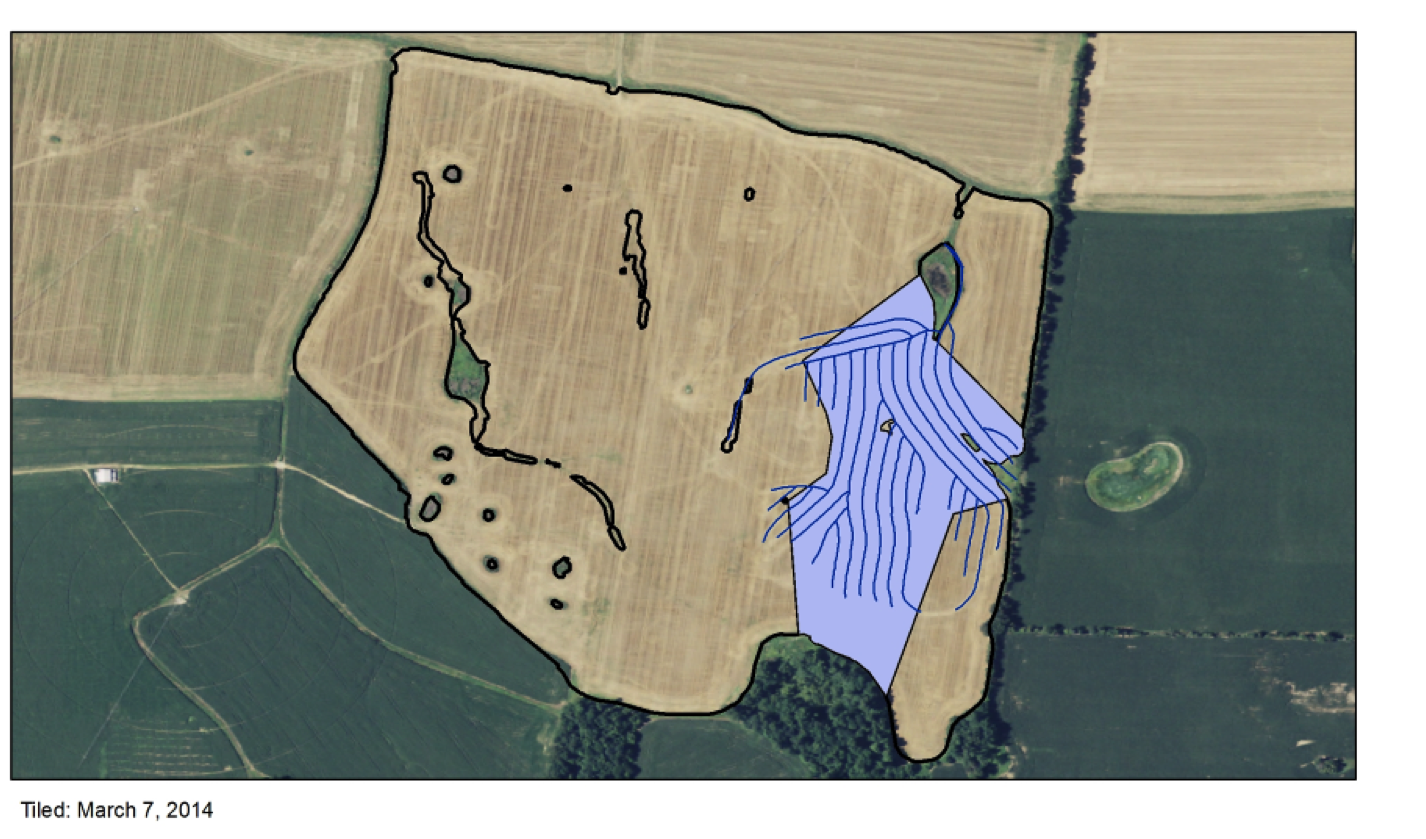 Winter wheat yields in this field near Herndon, Ky., on a farm rented by John and Alex averaged about 11.5% below the field average in 2012. Most of that loss was from the poorly drained area shown in blue. But after that area was tiled in 2014, yield in the entire field measured only 1.4% below average.

In the last few decades, the family, along with several land owners, has spent anywhere from $500 an acre to install tile drainage to as much as $1,800 an acre where there is no nearby outlet. Their laterals are sometimes as close as 30 feet apart and, due to their local topography, are able to discharge water into natural draws and feed the watershed instead of building holding basins.

The fields where the Youngs would typically tile fields are fairly productive in a dry year, but during a wet spring they might be unfarmable. For example, the shallow, high-clay Melvin soils on their operation may only produce a crop 1 out of every 4 years if left untiled, but adding tile can help them increase corn yields from zero, or even a meager 50 bushels per acre to the county average.

They discussed another field that was consistently running 50-60% behind the farm yield average in corn and soybeans, and almost nothing in wheat. After tiling, that field has been able to produce just as much as their other land.

“Not only that, we don’t get stuck in that field any more,” John says. “We used to go out there and even going downhill our big sprayer would get stuck. Now you can go in and do anything you want to.”

The Youngs hire a company to use a tile plow with a mix of laser and GPS technology to cut narrow trenches and place pipe with precision, and document where the pipe has been laid for future reference.

In areas with poorly drained fragipan Robertsville soils they can only run tile a little less than 2 feet below the surface, and laterals must be spaced 25-30 feet apart. “It’s very inefficient and more expensive,” John says. But they’ve had some of their best results on river bottoms, which would flood but had no restrictive fragipans and featured blacker soils that had been deposited over time.

They also have challenges with seeps coming out of hills, but have a way to deal with it.

“We lay tile up the hill to where the seep is, where it’s an actual wet band of soil, and put laterals in from that one line. Then the tile goes around the perimeter of the hill to pick up the seep,” John says. “You would actually go a few feet above where it’s wet, because 3 feet down below the surface is where the water is actually seeping in,” John says. “So we go just a little uphill from the surface water, dig down, put in laterals, and go the perimeter of the hill.”

For no-tillers thinking they may install some tile in problem fields this year, the Youngs urge them to do their homework on the topography of their fields and the likely effects. That includes contacting and working with their local NRCS office to ensure they aren’t tiling classified wetlands, and building in the proper setbacks if wetlands are discovered.

Young said he’s known some no-tillers who will agree to pay for the tile investment if the landlord will sign an agreement to pay that money back if the land is ever rented to someone else.

To learn how the Youngs are utilizing irrigation to boost production in sloping, poorer soils, see the article “Make Marginal No-Till Acres More Profitable with Irrigation,” on page 15 of the June 2017 issue.