Will You See a Return on Soybean Inoculation?

Nebraska farmers must scrutinize inputs and focus on finding profit for their estimated 5.7 million soybean acres in 2017. Among the many springtime decisions farmers make is whether to inoculate their soybeans. Based on information from farmers, agronomists and researchers, follow these steps when deciding whether to inoculate soybeans:

Nitrogen Fixation from Bacteria is Important

The process of fixing N in the soil air to ammonia occurs through the symbiotic relationship between soybeans and the Bradyrhizobium species, a bacteria within the nodules of soybean roots. Soybeans get needed N and the bacteria get some carbohydrates in return.

This process provides soybean plants 46%-74% of the N they need; the remaining amount is taken up from the soil. A 70-bushel-per-acre soybean crop takes up roughly 330 pounds N per acre in the aboveground portion of the plant, roughly equivalent to the N demand of a 245-bushel-per-acre corn crop. Many products state they’ll provide increased microbial activity, microbial health, and plant health. Make sure your inoculation product contains Bradyrhizobium japonicum cells.

Estimating Probability of a Yield Response

Place each of your fields into Category 1, 2, 3 or 4 described below.

Field Category 1: No previous history of soybeans and inoculation

Probability of a Yield Response: High 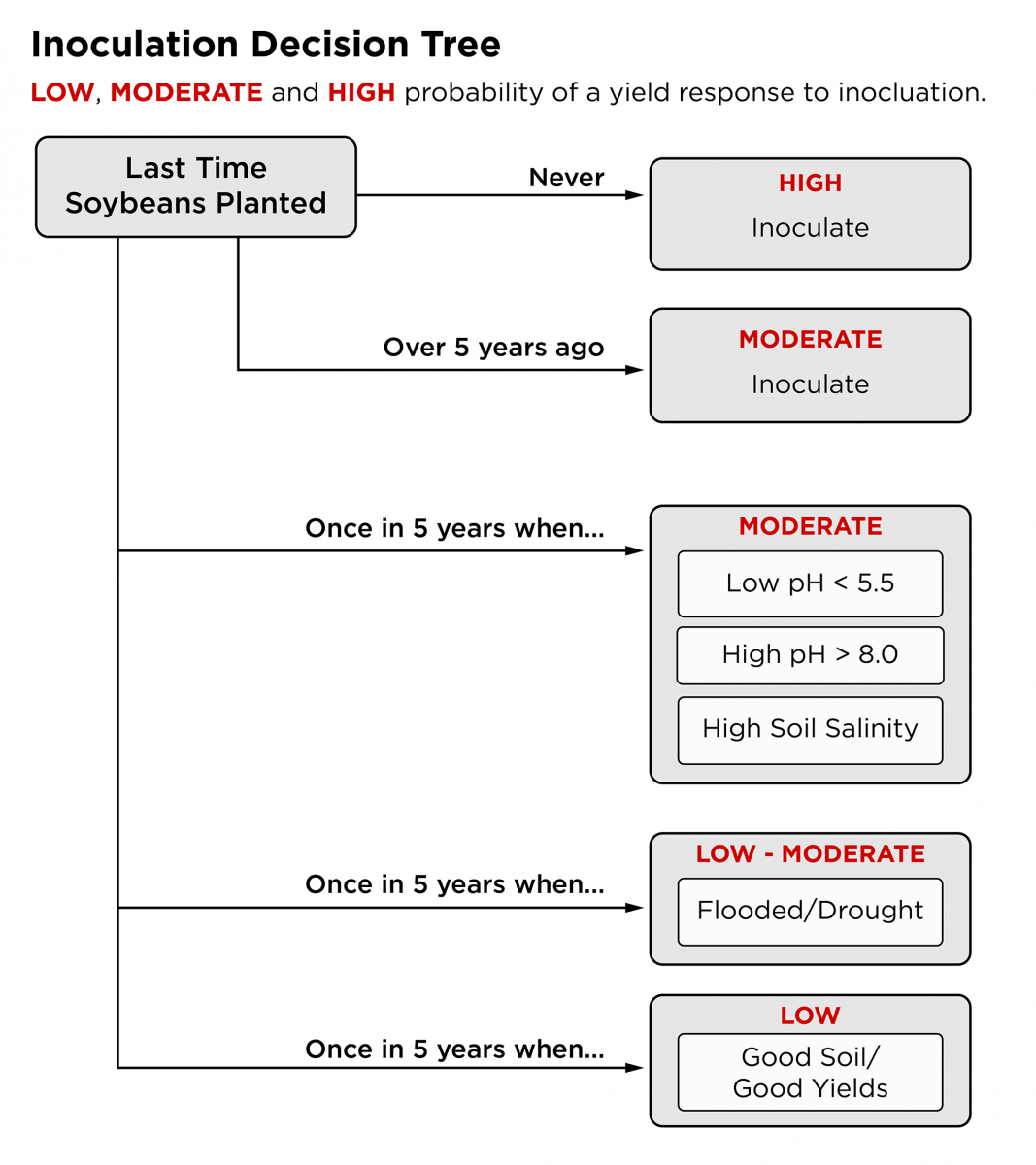 Field Category 2: More than 5 years since soybeans were last planted

Probability of a Yield Response: Moderate

Most university guidelines suggest inoculating if it has been more than 5 years since soybeans were last grown in the field. An inoculation study was imposed from 2009-11 within a long-term (initiated in 1983) crop rotation and tillage study in Wisconsin. Researchers in this study measured a 2-bushel-per-acre yield increase with inoculation (Optimize) after 5 years of continuous corn production when averaged across tillage/crop rotations.

A 2009 Iowa study reported inoculation increased soybean yield 2 bushels per acre on land coming out of pasture that had not been cropped for at least 20 years. Also, in a long-term study in Saunders County, Nebraska, no yield response to inoculation was measured even after 28 years of continuous grain sorghum production.

Field Category 3: Soybeans have been in rotation once in every 5 years, but there have been poor soil conditions for bacteria survival

Probability of a Yield Response: Moderate to Low

Several environmental factors can cause poor nodulation, decrease N fixation and reduce survival of these bacteria.

Field Category 4: Soybean in rotation once in every 5 years with good soil conditions for bacteria survival

Probability of a Yield Response: Low

The probability of a yield response in fields with a recent history of soybeans is extremely low unless the field is affected by the environmental factors in Field Category 3. An 8-year study testing 51 inoculant products in 73 experiments conducted in Wisconsin, Iowa, Indiana, Minnesota and Nebraska resulted in average yield response of 0 bushels per acre.

Some still advocate for inoculating with more effective N-fixing strains of these bacteria over common indigenous strains, e.g., Bradyrhizobium japonicum Bj123, in the Midwest even when environmental conditions have been conducive for N fixation. In the 2000-08 study, new inoculant products and strains were used. Of the 10 most widely tested products, yields were not influenced in fields with a recent history of soybeans. This is likely due to highly competitive indigenous strains diminishing potential gains from applying more effective strains.

Nebraska farmers have conducted their own studies on the need to inoculate soybeans through the Nebraska On-Farm Research Network from 1992 through 2016 (Table 1). Using the new searchable database at resultsfinder.unl.edu, you can review the data for yourself by selecting Crop = Soybeans and Sub Topic = [Crop Management – Inoculant]. Only one of the 17 on-farm studies resulted in a yield increase attributed to soybean inoculation (bolded in Table 1). Also, the cost of inoculant products varied ($0.44-$4.00 per acre) within these on-farm research studies. View specific treatment costs at resultsfinder.unl.edu. 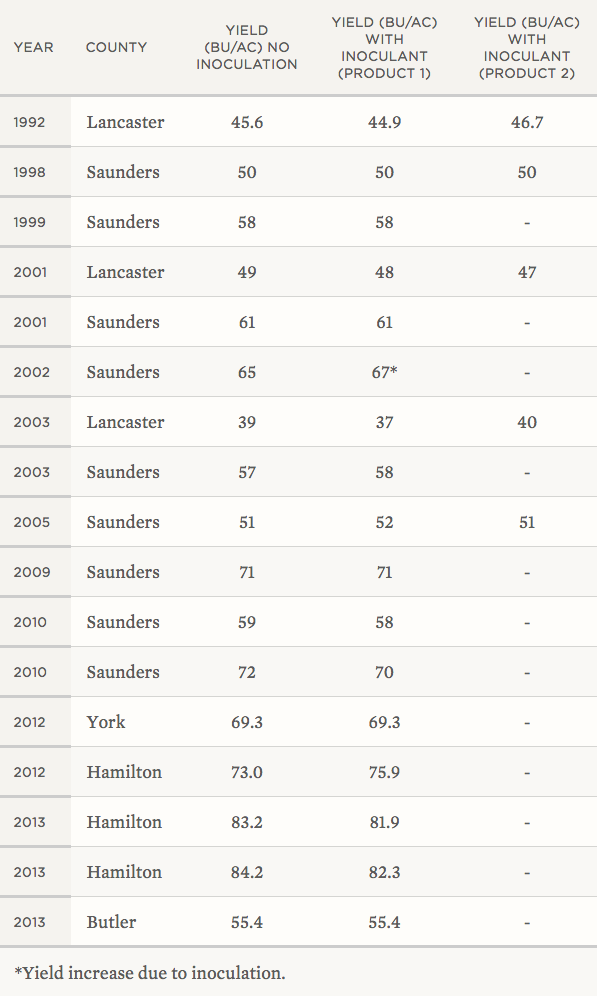 If you have managed soil pH well, planted soybeans recently, have medium to heavy textured soils, and have not experienced extended droughts or floods, direct your money away ($2-$4 per acre) from inoculating soybeans and move it to other management options that have an improved chance of return.

Will Soybean Inoculation Provide a Return on Investment?

Will Corn And Soybean Prices Return To Pre-Drought Levels?