Damage caused by snow mold in some eastern Washington wheat fields has surprised a Washington State University plant expert who has studied the fungus for nearly four decades.

Melting snow is exposing patches of injured wheat in parts of the state where destruction by snow mold is rarely seen, said WSU plant pathologist Tim Murray. He recently met with 20 growers in the town of Prescott, Wash., to address their concerns about the mold’s impact on winter wheat.

“Growers in this area have never seen this mold until now,” he said. “Its presence may have surprised me, but it really surprised them.”

After examining a half-dozen fields in southcentral and southeastern Washington, Murray identified winter wheat damage ranging from nonthreatening lesions on leaves to underground crown decay that kills the crop.

“I was surprised to see how prevalent the damage was in some of the fields,” he said. “We’ll definitely be seeing some economic damage as a result.” He stressed that the extent can’t be tallied until soils are warm enough to reveal which plants could withstand the damage and which could not.

Pink Fungus Among Us

But this winter’s pervasive snowy weather fueled the mold’s growth in lower elevations as well, said Murray, including Walla Walla, Whitman and Columbia counties. Caused by the fungus Microdochium nivale, the pink-tinged mold is showing up in fields of winter wheat and even lawns of grass, he said. 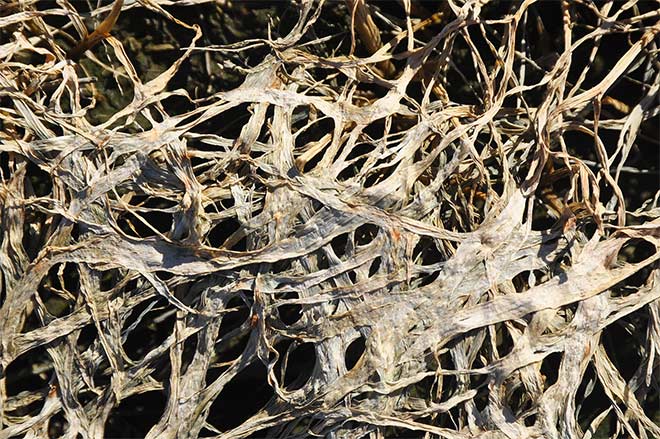 The pink color’s intensity fades with exposure of the mold to sunlight.

“Snow protects winter wheat and other dormant plants from cold temperatures, which is a good thing,” he explained. “But the snow cover becomes a problem when it stays on the ground for too long, which is just what happened.”

In areas where the fungal disease is evident, snow had covered the ground 60-70 days. Although longer than most years, “it’s still not long enough to cause the kind of damage I’ve been seeing. It typically takes at least 100 days,” said Murray.

Why, then, is the fungus among us? Abnormally warm temperatures in November kept the ground from freezing before the first hard snow arrived, creating a more hospitable environment for Microdochium nivale to grow, he explained. That, coupled with a longer-than-usual period of snow cover, gave it just what it needed to thrive.

“The fungus is out there. As we’ve seen, when the weather allows it to take advantage of the situation, it does,” he said.

Murray has spent 40 years helping to develop high-quality wheat varieties that mount a defense reaction against snow mold and other diseases that plague the crop in cold climates. Microdochium nivale is one of three fungi that cause snow mold in Washington.

Murray is advising growers to let a few weeks of warmer weather pass in order to assess the full impact of damage in their fields. At that point, they can decide whether reseeding will be necessary.

Concern Over Snow Mold in Wheat

Jointed Goatgrass Biotype, Resistant to Beyond, Discovered in Eastern Washington