How to Maximize Canola Topdressing Benefits

To maximize the yield potential of winter canola, producers should topdress with nitrogen, sulfur, and possibly boron in the winter. Producers should make topdress applications with consideration for the environmental conditions, the nutrients needed, and the application method.

The best time to topdress winter canola is during the rosette stage when the canola is dormant. Most years, this can easily be accomplished by topdressing in January or February, since temperatures are cold enough to keep canola from actively growing. If nitrogen is applied as a liquid when canola is green and physiologically active, be careful that the rate applied does not cause leaf burn. Both dry and liquid fertilizers are effective products.

A combination of nitrogen and sulfur can be used in the topdressing blend.

• Nitrogen. About two-thirds of the total nitrogen needed by the canola crop should be applied as a winter topdress. This can be done at dormancy or just as plants begin to show increased growth, but before the plants bolt.

Nitrogen uptake increases rapidly just before bolting. Topdress applications should be based on an updated assessment of yield potential, less profile residual nitrogen, and the amount of nitrogen applied in the fall. Suggested nitrogen rates for five yield levels and a soil with 2 percent organic matter and varying residual nitrate-nitrogen levels is shown in the table below.

Either solid or liquid forms of nitrogen can be used in the early spring. Once the weather warms and growth begins, applications using streamer bars or solid materials are preferred for broadcast applications to prevent/avoid leaf burn. 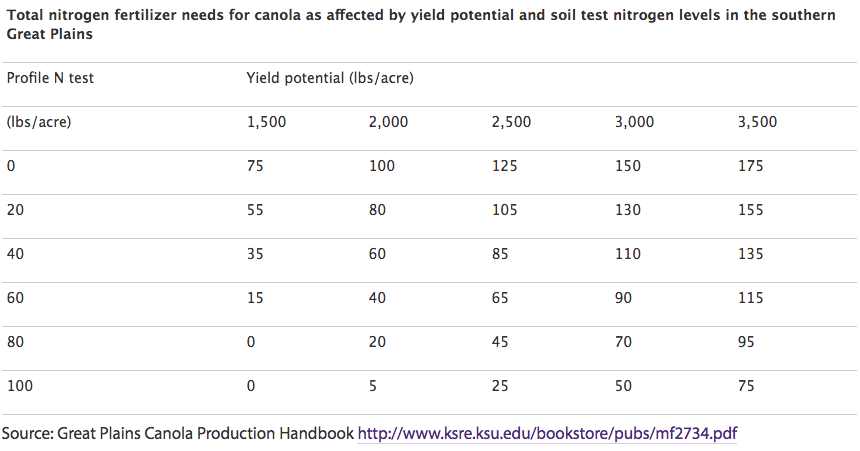 Some of the new controlled-release products such as polymer-coated-urea (ESN) might be considered on very sandy soils prone to leaching, or poorly drained soils prone to denitrification.

Generally a 50:50 blend of standard urea and the coated urea -- which will provide some N immediately to support bolting and flowering and also continue to release some N in later stages of development -- works best in settings with high loss potential.

• Sulfur. If canola is deficient in sulfur, the consequences can be very serious because the crop needs sulfur to produce oil and protein in the seed.

For this reason, soils having less than 20 lbs/acre sulfate-sulfur (10 ppm SO4-S) in the upper 24 inches should receive supplemental sulfur. A good rule to follow is to keep sulfur to nitrogen availability at a ratio of about 1 to 7. Another simple guideline is to apply 20 pounds sulfur per acre, which will be sufficient for low and medium yield levels.

• Boron. If deficient, boron is one micronutrient that can have negative consequences on canola yield. Typically boron deficiency is not something we have seen in Kansas.

However, if there are micronutrients that could influence yield, then boron would be one of them. The most important thing is to know what your soil sample states.

Applying boron may help to reduce flower abortion and enable efficient pod filling. However, there is not much room for error when comparing adequate boron fertility levels and toxic levels that might result from over application. Because of this, application rates of boron are often 1.0 lbs per acre or less. Soil and foliar applications of boron are effective.

Foliar applications can be made with herbicides, and soil applied boron can be either broadcasted or banded. Make sure applications are uniform across the field to avoid toxicity.

It is important to avoid crushing winter canola with wide appli­cator tires. Crushed plants will lodge and matu­rity will be delayed, which can slow harvest and increase the risk of shattering losses.

For this reason, applicators with narrow tires are preferred. Do not use high flotation tires. As for the question of whether broadcast or banding is best — if temperatures are cold and the plants are dormant, topdress fertilizer can be broadcast. If temperatures are mild enough that the canola plants have resumed active growth, it may be best to use streamer bars or some other form of banded application to avoid foliar burn.

Topdressing Canola: How to Maximize the Benefits

How to Set Up Check Strips for Canola Fields

Everything You Need to Know About Micronutrients