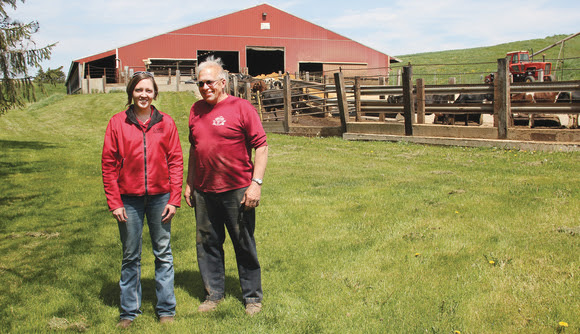 Jack Herricks, a pioneer of no-till farming in Monroe County, Wis., no-tilled before it was popular or regularly accepted. In 1971, at the age of 19, Herricks came home to run the family farm. “I came home with a suitcase of clothes and 10 dollars’ worth of change in my pockets, to ten siblings younger than me,” says Herricks. Herricks started with 34 cows and 120 acres. He now owns 1,080 acres and 600 cows. “We farm about 1,300 acres currently,” says Herricks. A century farm in 2012, Herricks is a third generation farmer. He farms with his wife, Pat, and his son and daughter, who are part owners. His son-in-law and three nephews also work on the farm full time as well as eight other employees.

Herricks' dad and grandpa laid out their first contours on the property in the early 1940s, to gain greater productivity  from the soil and reduce erosion. “We’ve practiced manure management and soil fertility practices for years to help with erosion,” says Herricks. In 1985, Herricks made his first effort at no-till corn. “At the time, the dealers didn’t know how to set up a planter for it yet, and everyone wondered what on earth I was doing with my fields,” says Herricks. He and his family have always tried to make good, conservation-minded decisions with their land. Herricks quotes Winston Churchill in saying “success is going from one mistake to the next, without any lessening of enthusiasm.” He resolved, through the challenges, he was going to make no-till work, and his farm has been no-till for many years now. Herricks is such an advocate of no-till, he promotes it and helps others in the area. “We used to go to several neighboring farms and plant a few acres here and there, with our no-till planter to help out, since no one else had the equipment,” says Herricks. The Herricks have played a major role in no-till being widely accepted in their area.

Herricks learned about the NRCS from his father. He has a hand written conservation plan his dad worked on with the Soil Conservation Service, now NRCS, in the early 1950s. “I remember as a boy, helping my dad put in waterways and contour strips. He was always concerned about keeping soil in place and he tried to do the best conservation practices he could in that era, so it was a natural follow through for me to continue those efforts,” says Herricks. With assistance from NRCS through the Environmental Quality Incentives Program, the Herricks installed cover crops, contour strips, water retention structures, and grassed waterways. They also practice no-till, forest management, timber stand improvement, and manure management. Through the NRCS Conservation Stewardship Program, they increase wildlife habitat by leaving standing grain, and use a nitrification inhibitor. “The inhibitor helps retain the nitrogen for the plants to use,” says Herricks. Herricks also has 1,200 taps for maple syrup, another step to diversify and make his land more productive, while cleaning up and improving his wood lots.

As the Herricks expand their dairy, they have started harvesting more corn for silage and there is less residue left on the fields. He protects the soil and builds organic matter by planting cover crops. “We’ve been using cover crops, like winter rye, for the past 8 years to get cover on the ground; we make an effort to have the least amount of brown ground time we can, keeping something planted in the soil to keep it protected,” says Herricks.

“It’s very humbling when I walk across the farm and think my family has made a living here for over 100 years,” says Herricks. This is a great example of sustainability. The conservation practices Herricks has implemented also help enhance his farms profitability, “The economics have to work out, over time, using no-till and cover crops, have worked and been economically profitable,” says Herricks. He’s seen organic matter go up from 2.6 percent to current soil test levels over 4.3 percent. “Due to our healthy soil and the use of cover crops, we are able to feed all our livestock, and are self-sufficient in forage and grain,” says Herricks.

In the early 1990s, the middle Kickapoo River Watershed, where Herricks' farm is located, was targeted for improvement. Through the targeted efforts, Herricks was able to install many water retention structures. During the initial assessment, a biologist walked Brush Creek in the watershed and deemed it a dead trout stream; it was not a good fish habitat. The same biologist walked Brush Creek 20 years later.

From the efforts put forth by the area farmers and partners, the creek was deemed an active fishery, had deeper water, and other improvements noted. “We have double the livestock than the rest of the watershed has; I feel the report is a direct reflection on us and how we manage our land and our manure,” says Herricks. “The quality shows up in the water, and that’s when you know your conservation decisions are making a true difference,” says Michelle Komiskey, NRCS Monroe County District Conservationist.

Herricks knows farming is his calling. He enjoys being a responsible steward and it motivates him to make the best decisions he can. “The working relationship with NRCS has been a true partnership. I see them as a resource for advice and design assistance. I might have ideas, but I can go to them and say, we’d like to do this, and they can help. It makes a huge difference to have staff I can call on and know I will get qualified answers and information,” he says. “We’re partnering together to make conservation work in this community,” says Komiskey.