No-Tillers Reflect Back to Move Forward at 25-Year Event

No-tillers soaked in lessons from no-till veterans, experts and fellow peers on how to keep their operations heading in the right direction at the 25th annual National No-Tillage Conference.

Traveling from as far as Australia and South Africa, nearly 1,000 no-tillers made the trek to St. Louis in January to learn how to further improve their no-till practices and celebrate the 25th anniversary of the National No-Tillage Conference.

Attendance for the “Gateway to the West” hit 950, with 435 first-time attendees. No-tillers from seven countries outside of the U.S. were present at the event.

The editors of No-Till Farmer have rounded up some of the best ideas, tips and lessons shared from the seven general sessions, 24 classrooms and three panels that were presented over the course of 3 days. The 2018 conference is slated for Jan. 9-12 in Louisville, Ky.

Since adding cover crops to his system, Johnny Hunter has witnessed the benefits and challenges they present.

One of the first benefits the Dexter, Mo., no-tiller saw after just one year of no-till and cover crops was his water infiltration, which he estimates improved by 100%.

He also discovered cereal rye is great for controlling pigweed. He explains there was a field that had been in continuous cotton for about 16 years and became infested with the weeds. But after 1 year of seeding cereal rye, he saw a dramatic difference.

“What percentage of pigweed reduction? I don’t know,” Hunter says. “I know after the first year I grew cover crops and no-till, I planted non-GMO soybeans on that sucker and it was a pretty clean farm.”

He also likes using turnips as a cover crop, but warns they can get to the size of a softball come spring, potentially causing the planter to bounce over them. Hunter added Dawn Biologic’s ZRX cover crop roller to his planter and says the setup smashes them down so there’s less bouncing.

Finally, he warns that any no-tillers who want to plant green into their cover crops need to throw their planting calendars out the window.

“All I care about is what’s going on in this field,” he says. “What is this cover crop telling me? Has my hairy vetch produced all the nitrogen I want it to produce? Is my cereal rye tall enough to form a weed barrier? And if the answer is ‘no,’ then we’re going to let this cover crop grow.”

LESSONS LEARNED. No-Till Farmer editor Frank Lessiter led a panel with the six individuals — (L-R) Allan Brooks, Scott Davidson, Allen Berry, R.D. Wolheter, Bryan Von Holten and Randall Reeder — who have attended all 25 conferences. One question Lessiter asked was the biggest no-till mistake they made. Von Holten’s response was giving up on no-till too early, while Brooks says his was assuming a weed was dead when it wasn’t.

Use All the Tools

Crop rotation alone may not be enough for no-tillers trying to minimize or prevent seedling diseases from dinging yields in corn and soybeans, Jason Bond told attendees of the Early Bird Breakfast sponsored by Syngenta.

While rotation may lessen the presence of some harmful soil pathogens, they aren’t eliminated entirely, says the plant pathologist for Southern Illinois University.

Conversely, monocultures may tilt the overall spectrum of diseases to a population that is more detrimental to that crop.

“Rotation can lessen the problem a little bit, but you need all tools in the toolbox to keep seedling disease in a manageable situation,” including proper seed treatments, Bond suggests.

He also moved to dispel the notion that tillage systems somehow exacerbate or alleviate problems with soil-borne pathogens, as there are too many differences in production systems, soils types and other factors.

“With no-till you may find that with cooler soils or more moisture at the time of planting, you might have an environment more conducive to seedling disease,” he says. “This has nothing to do with creating more pathogens in the soil. It’s the same density whether it’s no-till, tillage or some type of conservation tillage.

“What differs is temperature and moisture that might drive higher epidemics of seedling disease.”

When it comes to finding food, some plants are “smarter” than others.

J.C. Cahill, an experimental plant ecologist at the University of Alberta, explained that nutrients come in patches in the landscape. The good news is most plants put their roots where the nutrients are, but dicots — such as beans, sunflower and cucumber — are better at this than monocots, which include corn, wheat and barley.

Cahill says this is important in regards to how no-tillers apply their fertilizer.

“If you spread all of your fertilizer evenly, for a plant to get it, it has to have its roots everywhere,” he says. “It has to spend energy to grow a big root system.

“But if a plant is able to find fertilizer in patches, it may actually be able to get more nutrients for less cost of root. Where does that savings go? That’s yield.”

If no-tillers can modify their fertilizer regime to maximize the ability of the plant to do the work for them, there’s yield potential without increased input costs, Cahill says, or a potential to decrease input costs.

There are many keys to succeeding with cover crops, and two of the biggest for no-tillers are understanding what your goals are and knowing what you’re buying, says Mike Plumer.

When choosing cover-crop mixes, growers should do some soul searching on what’s limiting crop yields, find out what specific covers could help solve the problem and determine whether the solution is economically feasible.

“What are your soil types, and what are the problems inherent with them?” asked the retired University of Illinois Extension agronomist. “And use cover crops strips in your fields to check for benefits.”

If you’re setting up a trial on a farm or research plot for multiple years, Plumer strongly suggests buying all the cover crop seed you’ll need for the entire period in year one, due to consistency problems he’s seeing with seed quality on the market.

“Put the seed in cold storage and only use that seed in your trial. Because you never know what you’re going to get the next year or the second year,” Plumer says. “What’s in the bag has nothing to do with the name on it.”

One of the common questions Jeremy Wilson hears from fellow farmers is, ‘How do we turn the data we collect into dollars coming back into our operation?’ 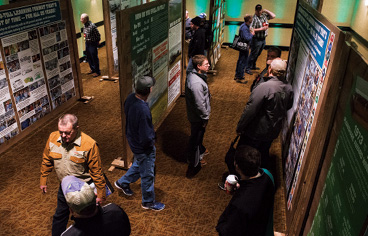 A WALK THROUGH TIME. To celebrate the conference’s 25th anniversary, No-Till Farmer created a photo gallery of the major events, milestones and memories that have occurred in the practice’s history. Later this spring, No-Till Farmer will produce a book on the history of no-till.

The Effingham, Ill., no-tiller has been on the forefront of adopting precision farming practices both on his family’s 1,200-acre grain farm, and also as a technology specialist with Crop IMS, an independent precision ag retailer.

But before farmers can capitalize on the value of collected data, they first need to understand how and why they collect it. Wilson has been logging data on his farm since 2001 and developing accurate, historical records can minimize limiting factors of production — but only if it’s valid.

Properly calibrated yield monitors is the foundation for collecting accurate data, Wilson says, but a process that is still underutilized.

“Uncalibrated data might as well be left on the field,” he says. “If you are not collecting calibrated yield data, you’ve just left the most valuable resource on that field that we’ll never have a chance to pick it back up.”

Accurate data can also be used to track yield variability and compare the productivity of different seed hybrids. Wilson crunched the numbers in 2016 for two different corn varieties planted on his family farm.

Split planting a field, they evenly planted two different varieties of corn seed — one being a new variety and the other a hybrid that had produced consistent yields for the last 2 years. Analyzing the results after harvest, Wilson says the new variety didn’t meet expectations, yielding on average 20 bushels lower than the established hybrid.

“We didn’t see it coming and based on our soil types, we expected the opposite results of what we ended up with,” Wilson says. “But our analysis showed us that this new variety wasn’t right for our fields, and we need to plan accordingly with what we select for the following year.”

One final takeaway from Wilson was that accurate data could have long-term benefits that no-tillers may not even be thinking about today. Having documented results of yields, soil health and field-test results will likely aid in increasing land value.

“I’m already building 10-12 years of rock solid data that I can document what that productivity is to anyone who wants to purchase land I may have for sale, so I don’t have to guess.”