How Crop Tolerance to Weeds Is Influenced by Preceding Crop

The adoption of no-till systems has led to a renewed interest in crop diversity and rotation design.

Rotations that include a diversity of crops gain a multitude of benefits, especially for pest management. Crop diversity can disrupt population dynamics of insects, weeds, and plant pathogens to reduce infestation levels and subsequent yield loss.

Because weeds compete with crops for water, we wondered if preceding crops, such as dry pea, could also improve crop tolerance to weeds.

To test this idea, we compared winter wheat tolerance to a uniform weed infestation as affected by the preceding crop. The preceding crops — dry pea, soybean and spring wheat — were no-tilled into corn stubble. Winter wheat was planted that fall after harvesting these crops.

We used an early maturating soybean cultivar (maturity class 00.3) so we could plant winter wheat on the same day for all preceding crops. To achieve uniform weed interference, we planted wild rye in half of the plot and compared wheat yields from the two subplots. Wild rye was established at 15 plants/m2 three days after winter wheat emerged.

Crop management was based on best management practices for this region (eastern South Dakota). Nutrient management included nitrogen (N) credits for legumes and was based on a yield goal for winter wheat of 85 bushels an acre. The study was located in a field where intensive weed management in previous years resulted in low density of the native weed community.

Winter wheat yield varied with preceding crop in both weed-free and rye-infested conditions.  When wild rye was present, winter wheat yielded more than 75 bushels an acre following dry pea, but less than 60 bushels following either soybean or spring wheat (Figure 1). 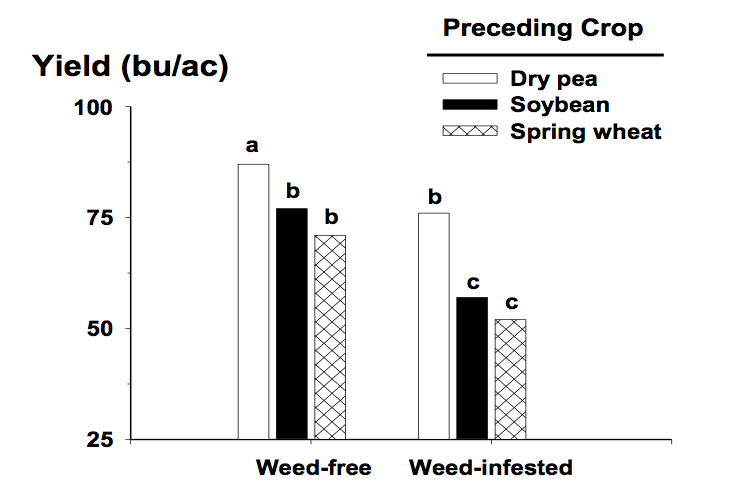 A somewhat startling trend was that winter wheat yielded as high following dry pea when wild rye was present as following soybean or spring wheat in weed-free conditions. Yield of winter wheat varied from 60-100 bushels an acre during the 4 years of the study, yet the impact of dry pea was consistent across years.

To further explore this effect, we examined these same crops for impact on corn tolerance to weeds and using foxtail millet for uniform weed interference. Corn was also included as a preceding crop.

We followed a protocol similar to the winter wheat study, establishing foxtail millet at a density of 100 plants/m2 in half of each plot. Seeds were broadcast on the soil surface the day of corn planting. Nutrient management was based on a yield goal of 135 bushels an acre. 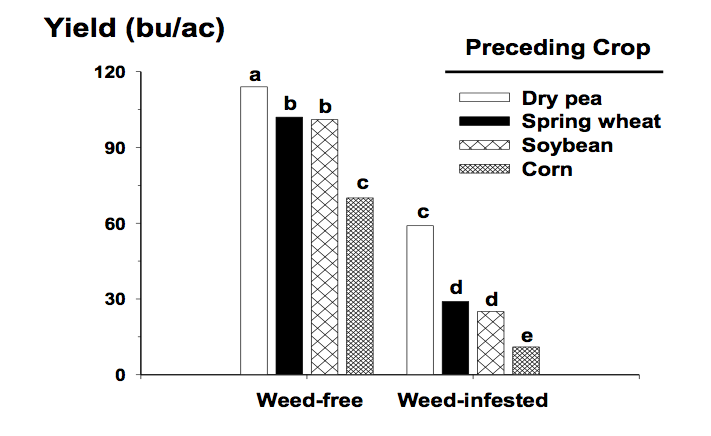 Figure 2. Corn tolerance to weed (foxtail millet) interference as affected by preceding crop. In weed-infested conditions, fresh weight of foxtail millet in corn 7 weeks after emergence was approximately 1,065 g/m2 and did not vary among preceding crop treatments.

In weed-free conditions, corn yielded 11% more following dry pea than either soybean or spring wheat. Even though corn yield varied from 110-160 bushels an acre during the 3 years of the study, the benefit of dry pea was consistent across years.

Because of its favorable impact, we wondered if the effect of dry pea on corn tolerance to weeds would persist for a second season. So we evaluated a series of 2-year crop sequences on corn yield and tolerance to foxtail millet interference.

Dry pea, soybean, spring wheat, and corn were grown in the first year, soybean in all treatments in the second year, and corn in all sequences in the third year. Weeds were controlled in the first 2 years of the sequences; foxtail millet was present only during the third year when we assessed corn tolerance.

The benefit of dry pea persisted for 2 years; corn yielded more than 55 bushels per acre in the dry pea-soybean-corn sequence when foxtail millet was present, but less than 45 bushels an acre following the other three sequences (Figure 3). 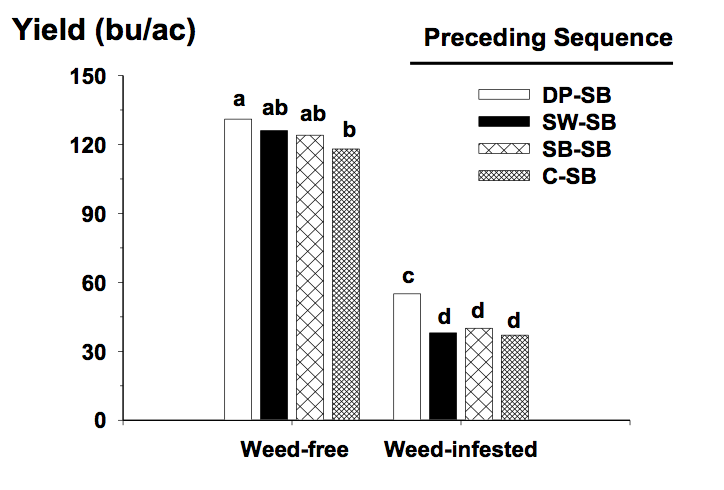 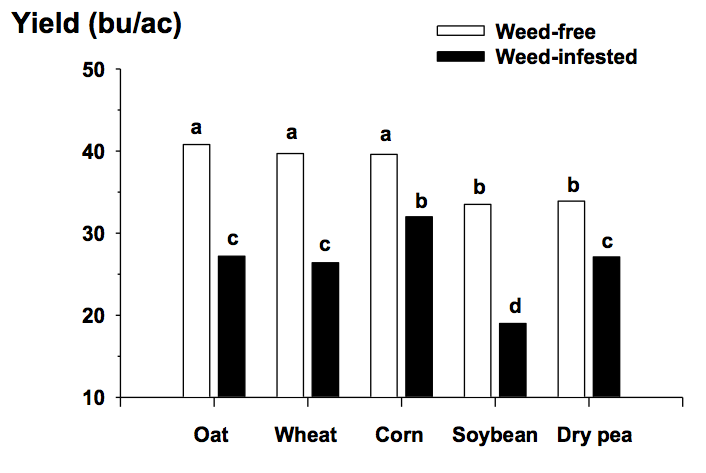 Figure 4. Soybean tolerance to weed (foxtail millet) interference as affected by preceding crop. In weed-infested conditions, fresh weight of foxtail millet in soybean seven weeks after emergence was approximately 550 g/m2 and did not vary among preceding crop treatments.

As expected, crops were less tolerant to weeds in monoculture sequences, i.e., wheat following wheat or corn following corn, which likely is related to diseases. But, we were intrigued with the large difference between dry pea and soybean in affecting winter wheat and corn.

We attempted to identify the cause of this beneficial impact of dry pea in a following study with corn. We monitored seedling emergence, growth, and development of corn planted after dry pea and soybean.

But we found no differences in growth, development, or nutrient concentration when corn followed either dry pea or soybean. The only difference observed was corn yielded 12% more following dry pea. Apparently, dry pea affects growth efficiency to increase yield without changing plant size.

We speculate that the favorable effect of dry pea and corn on following crops involves soil biology, as the effect can persist across years (see Figure 3). In our research with this favorable interaction among crops, which we term synergism, we have noted that synergism is more prominent in no-till systems.

Soil biology changes considerably across time in no-till, and these changes may favor synergism.  Several factors of soil biology could be involved; one possible explanation may be that dry pea or corn changes the ratio or balance of multiple factors.

Because of the complexity in soil biology, we may not be able to identify a specific cause for synergism between crops. But, measuring WUE as affected by preceding crops may provide a guide to identifying synergistic sequences.

Our studies demonstrate that crop diversity can improve crop tolerance to weeds. However, this effect appears to be crop-to-crop specific; not all sequences are synergistic.

Weed infestations in farmer fields are usually lower than the densities we tested, but synergistic sequences will minimize impact of weed escapes and low weed densities on crop yield.  Synergism will be especially helpful in management systems seeking to reduce herbicide inputs.

A further benefit of synergistic sequences is higher yields in weed-free conditions. Synergism may facilitate the use of cover crops in rotations. In the Great Plains, dry pea improved WUE of winter wheat, even when grown as a green fallow (terminated after 6-8 weeks of growth). The change in soil biology during the green fallow interval was sufficient to improve winter wheat WUE.

A similar benefit has been shown with lentil and spring wheat tolerance to weeds in Canada.  Cover crops suppress weeds, but also can reduce crop yield because of water use. If cover crops that improve WUE were identified, sequences between cash crops and cover crops may exist that enhance weed management but not reduce crop yield.

‘Innovations in Regenerative Agriculture’ is the Theme of AIM Symposium