From No-Till On The Plains

No-Till vs. Never-Till: What’s the Difference?

Along with “no-till” you’ve probably heard the term ‘never-till’ before. But what does it mean?

Although no-till practices have many benefits, those positives are diminished when growers decide to occasionally till their soils, perhaps thinking it won’t amount to much.

Even soils passed over with more conservative tillage methods lost 4.3 times more C02 than no-tilled. Earlier studies show carbon losses that could be directly attributed to tillage ranged from .0005% to .0037% of the total, which is small compared with the total carbon content of the soil.

By contrast, studies in Brazil show conversion to no-till and crop rotation has resulted in a mean soil organic carbon sequestration rate of 0.18 tons per acre per year.

More than two-thirds of no-till acres in South America are permanently no-tilled, while that’s only the case in 10% to 12% of no-till acres in the U.S., according to numbers from the Conservation Technology Information Center based in West Lafayette, Ind.

Derpsch believes no-till practices have reached a plateau because too many growers are engaging in “rotational tillage” — occasionally dusting off the chisel plow to deal with compaction, weed problems or other issues in a field — rather than committing 100% to no-till.

In his experience, growers most often turn their backs on continuous no-till due to mindset, concerns about compaction, phosphorus stratification at the soil surface or the perceived need to incorporate lime to address soil acidity.

Another problem, he insists, is that the definition of no-till is handled loosely.

His definition: “A system of planting crops into untilled soil by opening a narrow slot, trench or band only of sufficient width and depth to obtain proper seed coverage. No other soil tillage is done.”

Erosion problems seen on many farms are a key indicator of inadequate soil cover and poor-quality no-till, along with seeding and fertilizing equipment that disturb higher levels of soil than necessary, Derpsch says.

While it may be profitable, double-cropping is not a rotation, and even 2-year rotations may not efficiently reduce diseases, weeds and pests, Derpsch says.

A possible goal to strive for is stacked rotations, such as those developed by direct-seed expert Dwayne Beck, research manager for the Dakota Lakes Research Farm in South Dakota.

One such rotation includes wheat after wheat, corn after corn and soybeans after soybeans.

Crops aren’t repeated on the same field until the 5th year, minimizing problems with diseases and pests that begin to build up after 2-year rotations.

Rotating fields into pasture is another option if animals don’t remove too much residue, Derpsch says.

According to Derpsch, less than 60% soil cover after seeding is low-quality no-tillage. Soil cover of 80% or more is high-quality no-till, he says, with the higher levels of residue controlling wind and water erosion and weed growth, and conserving soil moisture and improving water infiltration.

Citing a South American study, Derpsch says a field with 0% soil cover produced runoff rates of 75% to 80% after a 1-hour simulated rainfall. Soil with 100% cover allowed nearly complete water penetration, with little or no runoff.

“Almost all of the benefits from no-till come from permanent cover of the soil, and only a few from not tilling,” Derpsch says.

It may be difficult to convince no-tillers they should plant a crop that can’t be sold at market.

But Derpsch says covers have proven their worth in reducing use of pesticides and herbicides, preventing soil erosion, conserving soil moisture, building soil organic matter and fixing nitrogen levels.

“The USDA says no matter where you farm, there are cover crops that meet your needs,” he says.

Cover crops such as oilseed radishes offer a solution to compaction problems, with roots penetrating more than 3 feet into the soil.

Covers can also help soil utilize the nutritional benefits of lime. Research in Brazil found that lime applied without plant residue was limited to the upper 4 inches of the soil profile.

The importance of organic matter in a quality no-till system can’t be overstated, and conventional tillage does little more than reduce it, Derpsch says.

Farm research in North Dakota nearly 30 years ago showed that conventional tillage reduced carbon content in the soil by half after 20 years of tillage, and by two-thirds after 60 years.

The good news, Derpsch says, is that no-till can gradually reverse this process. He cited additional farm research from 1996 in Brazil showing soil with only 1.7% carbon content remaining after many years of being tilled conventionally rising to 3.7% after 10 years of no-till. 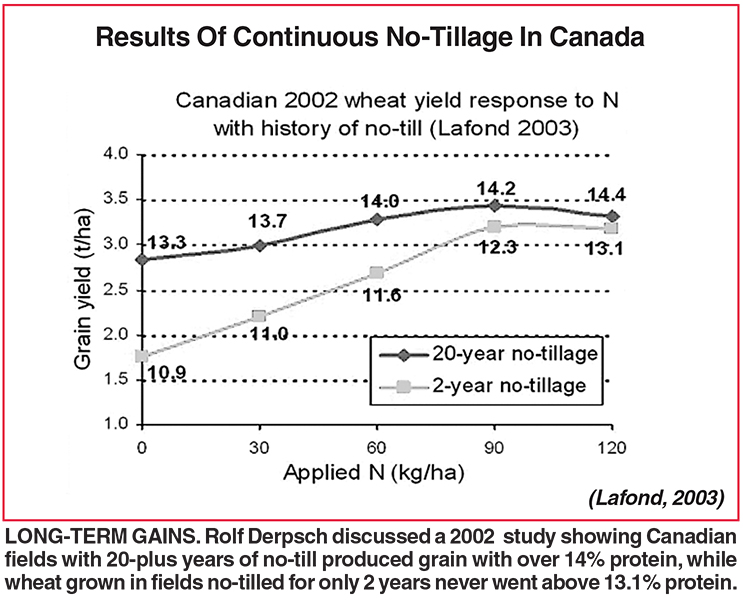 He adds that organic content measurements taken from farm plots at Ohio State University’s Ohio Agricultural and Research Development Center (OARDC) in Wooster, Ohio — the oldest no-till experiment in the U.S. — shows that carbon levels haven’t peaked, even after more than 40 years of continuous no-till.

The level of organic carbon in Wooster’s soils — planted with a corn and soybean rotation — had risen from 13 grams per kilogram of soil in 1962 to about 28 grams in 2003, while carbon content in conventionally tilled soil has fallen from 13 grams to about 10 grams during that period.

Similar results were noted at OARDC’s Hoytville, Ohio, research plots between 1962 and 2005, with organic carbon rising from 23 grams of carbon per kilogram of soil to 35 grams in no-tillage while it was reduced in conventional tillage.

“Any system that constantly reduces the organic matter content in the soil results in poor soils,” Derpsch says. “Soil sustainability is what we should aim for with our farms.”

Initial rebuilding of soil aggregates, re-establishing microbial biomass and organic matter may take up to 5 years, with a transition period of another 5 to 10 years where soil density, crop residue and organic matter gradually increase.

Nutrient cycling and the cation-exchange capacity of the soil begin to improve in a 10- to 20-year time frame.

Derpsch likens no-till fields to a “beautiful building” of high-quality soil with the help of earthworms, soil fauna, collembola, insects and other organisms.

All of it could potentially be destroyed by conventional tillage.

“Farmers doing rotational tillage will never experience the full benefits of the no-till system,” he says. “Permanent no-till is needed to reap all the benefits.”

With Strip-Till, Hitting The Mark Makes The Difference

What's the biggest no-till mistake you've made, and what did you learn from it?