Volatilization losses of ammonia from urea, leaching of nitrates beyond the root zone in the soil and denitrification due to saturated soil are major concerns of growers and agronomists when there is deficient or abundant precipitation. It seems that both are occurring in South Dakota this year.

The nitrogen (N) cycle is very complex as it includes all forms of matter: solid (fertilizer and manure), liquid (dissolved N as nitrate and ammonium) and gas (ammonia). The cycle is highly influenced by soil microorganisms and enzymes, pH, moisture content of the soil and atmosphere, and temperature.

Corn and wheat require large amounts of N to attain desired yield goals, and therefore most N application options are commonly limited to surface broadcast. Surface broadcast N fertilizers require precipitation or tillage to incorporate into the soil for plant root absorption. Depending on the N fertilizer source, the N could be susceptible to volatilization losses and ultimately leaching losses if too much precipitation has occurred and N is in the nitrate form. Urea N forms are susceptible to volatilization losses while ammonium and nitrate are not.

A chemical ingredient that can slow volatilization by inhibiting urease enzyme activity when the urea is allowed to remain on the soil surface (i.e. no-till) is NBPT (N-(n-butyl) thiophosphoric triamide). When precipitation is received, the urea will be moved into the soil and no longer susceptible to volatilization losses.

However, the conversion of urea to nitrate, a plant available form of N, is susceptible to leaching if there is too much precipitation. The conversion of urea to nitrate is a microbially controlled process called nitrification. A couple active ingredients are available that can greatly slow this conversion and allow the urea N to remain as ammonium (NH4+), a positively charged ion that is held by the soils cation exchange capacity, which is not leachable. These active ingredients are nitrapyrin and DCD (dicyandiamide). Urea that has both NBPT and DCD protection is called SuperU.

A corn research project conducted at 20 locations in South Dakota during 2013-14 compared surface applied SuperU and urea at a rate of 80 pounds N per acre. The N rate was purposely kept low to enable research sensitivity that would allow the researchers to measure differences between the treatments. If a higher N rate would have been used, it might have been too high for the yield potential, and thus overshadowed any difference between the SuperU and urea.

Unfortunately, soil moisture and precipitation data was not available to correlate with potential N losses. Therefore, the randomness of the yield differences between SuperU and urea are not quantifiable at this time, but at least this data shows the relative potential and frequency for possible N losses. 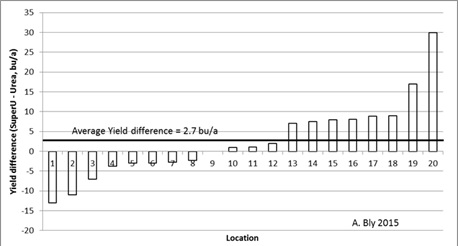