Corn and Soybean Survival in Saturated and Flooded Soils

Heavy rains on May 6-7 in southeast Nebraska resulted in ponding and flooded areas of some fields. As of Sunday, May 3, USDA-NASS reported that 57% of Nebraska's corn was planted, ahead of the 41% last year and 38% average.

We've had a good planting season to date with more than 9% of the corn crop emerged. USDA-NASS also reported that 12% of our soybeans were planted, a bit ahead of last year's 10% and the 5-year average of 9%. But will these saturated/flooded soils affect germination and plant viability? They certainly could.

Table 1 summarizes research information on this question for corn. Smaller seedlings are more susceptible than larger seedlings. Unfortunately the effect of standing water on germinating seeds is not well known. What is reported is that some hybrids respond better than others — but remember, there is limited data on hybrid responses to saturated and/or flooded soil. Germinating seeds are living organisms and require oxygen to survive. The oxygen supply in flooded or saturated soils will become depleted within about 48 hours. Cool air temperatures will help increase the possibility of survival, but germinating seed and plants would not be expected to survive more than 4 days.

Seedlings with fewer than six leaves can withstand 4 days under water if air temperatures are lower than the high 70s. If air temperatures are greater than that, seedlings may only survive one day. As mentioned, most — if not all — emerged Nebraska corn has fewer than six leaves at this time. Corn not completely submerged has some limited capacity for diffusion of oxygen from the shoot to the root that can increase survival.

After soils dry and waters go down, confirm plant survival by examining the color of the growing point of the seedlings. The radicle (root) and coleoptile (shoot) should appear white or cream-colored (Figure 1). Surviving plants should resume growth within 3-5 days after the water recedes. 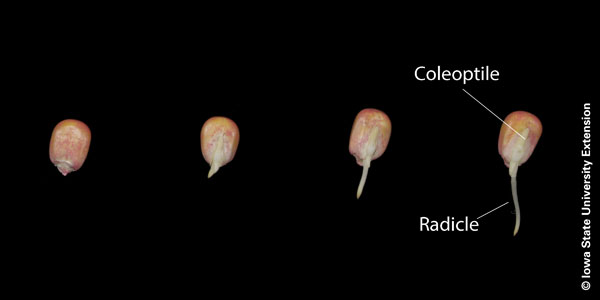 As fields drain and soils dry, assess surviving plant populations and — if stands are weak — consider the economics of replanting corn or planting another crop. If this wet weather pattern breaks, and dry conditions follow the week of May 11, there is still plenty of time to replant if stands of earlier planted corn are poor. Although yields of mid-May planted corn will normally be reduced relative to earlier planting dates, every year is different and planting in mid-May may still produce reasonable yields. There is certainly no need yet to think of switching hybrids for earlier-season hybrids or for switching to other crops.

Very little of the soybean crop has emerged. The effect of saturated and flooded soils any time and for any duration during the germination process will reduce the final germination and emergence of soybeans. Research shows that a 2-day flooding event after seed imbibition and swelling can reduce germination by 20-43%. However, early-season flooding and soybean survival depends on many factors. Based on seedling soybean disease pressure observed in flooded fields replanted during 2014 in Nebraska, use a fungicide seed treatment in fields recently flooded.

[Podcast] Regenerating No-Till Soils After a Season of Saturated Soil