After every mild or harsh winter, we are asked to speculate on what it means for insect pests. For many pests, winter temperatures are an important predictor of populations the following year. But the western corn rootworm is not one of them.

The eggs are exceptionally hardy, and can withstand prolonged (10 days straight) exposure to soil temps well below freezing (14 F) before significant mortality occurs. This very rarely happens in Indiana. As a result, winter kills are not a factor in rootworm populations.

By the same logic, warm winters are not of great benefit to the populations. In fact, there may be a benefit to warm winters in rootworm control. A key source of egg mortality is predation by other insects in the soil, including ground beetles, many of which are far less tolerant of cold temperatures.

One weather factor that does have a large potential to affect populations is spring rainfall. See the graph below — rootworm emergence times vary slightly and are driven by spring heat unit accumulations, but generally occur in late May and early June. The larvae must find corn roots within 24 hours of emergence, or they will starve to death.

A spring rain that results in saturated soils during this time, although not desired for crops, does have the silver lining in that it drowns many young larvae and prevents many more from finding host plants — the larvae can’t “smell” their way to corn roots without air pockets in the soil. And they subsequently starve to death.

Although it’s not the headliner it used to be, the western corn rootworm is still the key insect pest of corn most everywhere, including here in Indiana. Bt corn hybrids targeting this pest have been highly effective in allowing producers to manage rootworms effectively and without need for insecticide boxes or liquid application systems. 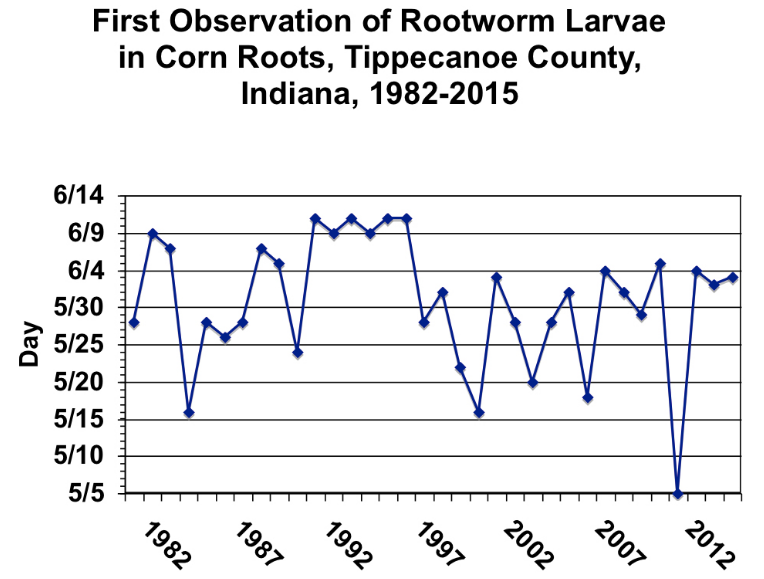 The changes in planting equipment have reflected these trends. In fact, according to the USDA, 81% of all corn planted in the US last year was Bt corn (http://tinyurl.com/9qm9ssv), with the percentage likely being closer to 100% in Indiana. This approach is still effective, and no additional insecticides are required or recommended. Most producers have used Bt corn effectively for over a decade of rootworm control, and can safely continue to do so.

Planting the refuge remains as important as ever, however, given that reports of confirmed resistance in states to the west continue to trickle in. However, Indiana has not joined that group — likely because of our extensive crop rotation with soybeans, which remains an effective tool for population reduction.