Agricultural Research Service (ARS) scientists in College Station, Texas, have found a way to use digital images taken in aerial surveys to identify regrowth cotton so it can be targeted for spraying and other control measures.

U.S. cotton growers spent $20 million to monitor and control boll weevils in 2015, and the pest continues to infest cotton in the Lower Rio Grande Valley, the southernmost cotton-producing region in the United States. To prevent the insects from taking refuge in cotton plants, growers there mow down their plants after harvest and may spray plant stalks with herbicides.

But because the Valley is subtropical, heavy rains in the fall often prevent growers from taking those measures. Cotton plants are susceptible to freezing temperatures, but the region’s warmer temperatures reduce the chances of winter freezes, making cotton plants more likely to regrow and create year-round boll weevil habitats. Such “regrowth cotton” is often spread out over large areas or scattered among out-of-the-way fields, so detecting it is a major challenge.

Agricultural Research Service (ARS) scientists in College Station, Texas, have found a way to use digital images taken in aerial surveys to identify regrowth cotton so it can be targeted for spraying and other control measures. 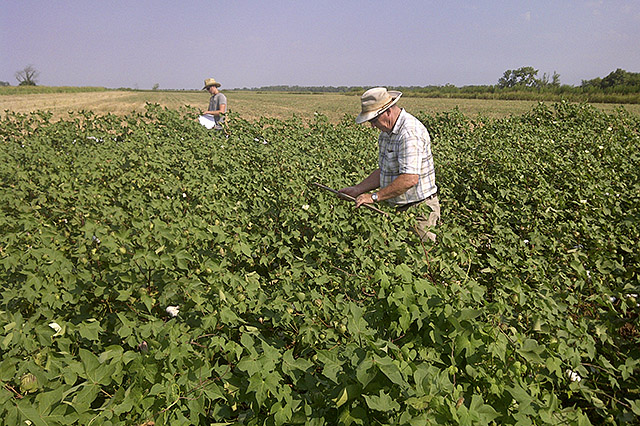 ARS meteorologist John Westbrook, entomologist Charles Suh, and agricultural engineer Chenghai Yang expect their approach to be quickly adopted because recent rains have made mowing down postharvest cotton plants more difficult, increasing the likelihood of a surge in boll weevil infestations. “The rains are making it harder to get into these outlying fields to detect and shred the stalks and apply the herbicides,” says Westbrook.

Researchers grew cotton, defoliated it, and mowed it down or shredded it. They also arranged for nine flights over the cotton by a plane equipped with two digital cameras that flew at an altitude of about 1,000 feet. The cameras took high-resolution images as the cotton grew and intermittently for about 2 months after it was harvested and shredded.

One camera shot color images, and the other shot in the infrared spectrum. Researchers interpreted the images using software that assigned spectral bands to each pixel in each image based on the type of matter recorded—whether it was bare soil, weeds, or cotton leaves.

The scientists also conducted ground-based surveys on the same dates as the aerial surveys. They measured the height and width of cotton plants as the plants grew and after harvesting and shredding were completed.

For the ground surveys, they used hand-held hyperspectral radiometers to measure the amount of solar radiation reflected by the plants and the bare patches of soil as another way of monitoring plant growth. They also recorded the postharvest daily air temperatures and correlated them with the sizes of the regrowth cotton to predict when regrowth plants would reach sizes sufficient for aerial detection.

The results show that aerial imagery can be used to estimate regrowth when the leaf canopies of cotton plants are at least 8-12 inches wide. The scientists also were able to use the air-temperature and plant-size data to develop a model for predicting when the regrowth cotton would reach detectable sizes, based on temperature patterns.

The study was partially funded by the Cotton Foundation and Cotton Incorporated.

Update on the Alfalfa Weevil