Cover crops offer a valuable tool for farmers to reduce nutrient loss and help ensure clean water in Iowa waterways. But some farmers have reported that planting winter rye as a cover crop may reduce corn yield.

A team of researchers at Iowa State University (ISU) is investigating why there may be an occasional decrease in corn yield after planting winter rye.

“We want farmers to understand any risks involved before they plant cover crops,” says Alison Robertson, an associate professor in plant pathology and microbiology. “If there appears to be a downside to this practice, we want to understand it more fully and hopefully develop management practices to reduce the risks.”

Robertson leads a group of ISU faculty and USDA scientists, including Tom Kaspar, Matt Bakker and Andy Lenssen, on a project that is funded by the Iowa Nutrient Research Center at ISU. It is one of 31 projects funded by the center since 2013.

Cover crop research has shown a potential for nutrient management. Studies in Iowa have found that planting a cover crop of winter rye can reduce nitrates loss by 15-55% depending on the location, year and amount of cover crop growth.

Robertson said cover crops are encouraged as a good conservation practice on Iowa farms. Winter rye is the most common cover crop in Iowa due to its low cost, fast growth, winter hardiness and ability to reduce nitrate concentration in drainage water.

“Cover crops have many benefits when planted between harvest and planting the next crop,” Robertson says. “Not only do they manage nitrogen, they also improve soil health by reducing erosion, enhancing soil structure and increasing soil organic matter.”

However, she added, the potential for occasional corn yield loss following a winter rye cover crop could make farmers hesitant to adopt the practice.

Tom Kaspar, a USDA scientist and collaborating professor in agronomy, noted that long-term cover crop users do not appear to have problems with reduced yield. He said that poor planter performance and reduced early season nitrogen (N) availability are possibilities for the yield reduction. 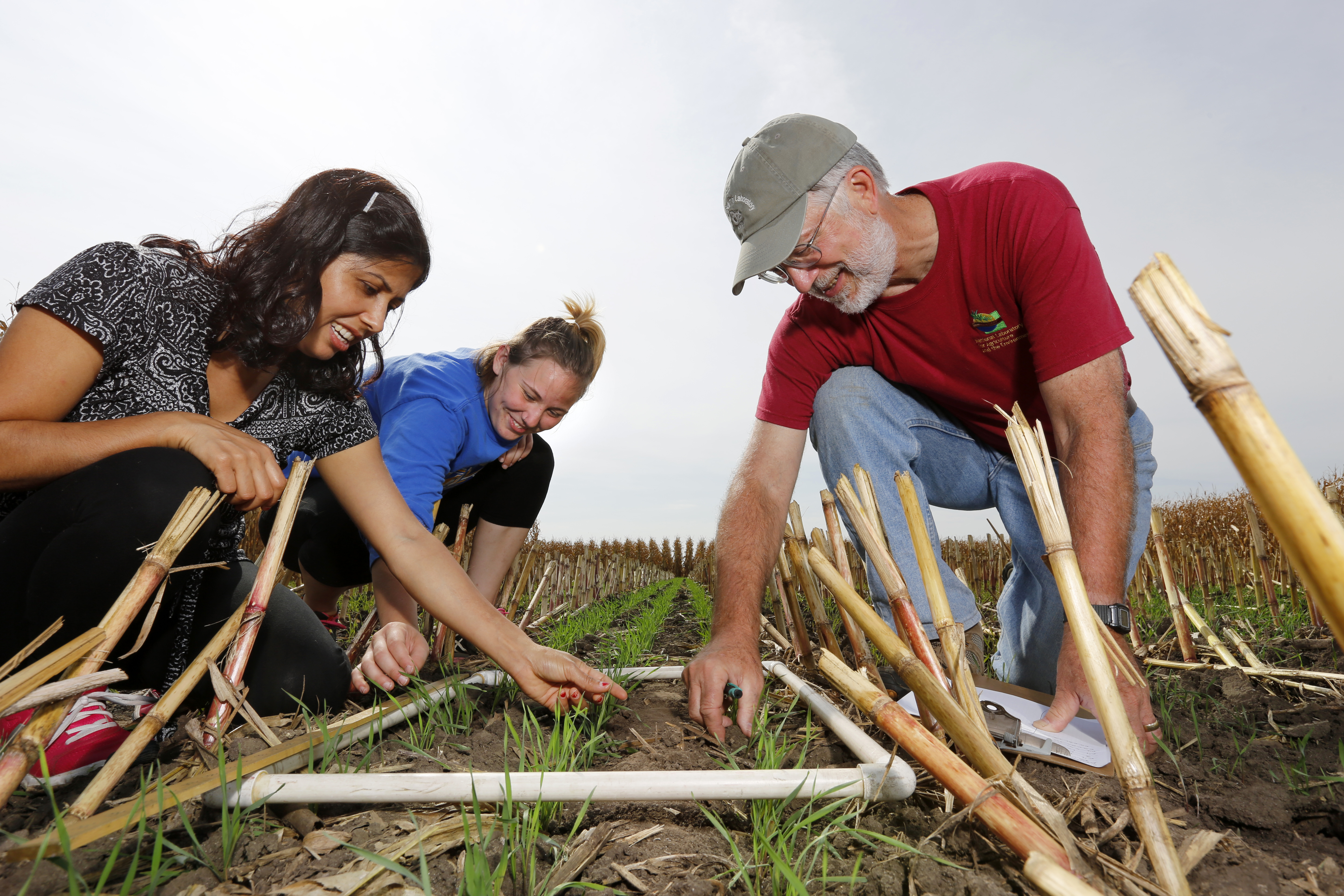 “If we understand that this potential problem exists, we can manage or avoid it and release the true potential of cover crops,” Kaspar says.

Robertson adds another possible cause of corn yield reductions may be stand loss due to soilborne pathogens that can cause seedling diseases. If the soil is cool and wet, these seedling diseases can result in root rot that may lead to seedling death or corn plants with reduced growth.

In a combination of greenhouse and field trials, Robertson and research associate Jyotsna Acharya found that corn emergence and early growth was significantly reduced when planted after winter rye particularly when rye was terminated within 14 days of planting corn. They found that the shorter the time period between terminating the cover crop and planting the corn crop, the higher the likelihood of seedling disease. Additionally, the roots of the young corn plants showed evidence of root rot.

“Our next steps will be to determine the effect of other production practices such as starter fertilizer applications, banded herbicide application to terminate cover crops and modified planting procedures on the risk of seedling disease after rye cover crops,” Acharya says. “This year, in our 2016 field experiments, we also will be examining the use of a different cover crop, camelina, in corn and soybean rotations.”

The research also indicated that in some cases, alternative management practices to limit seedling disease may be required by farmers to reap the full benefits of cover crops. These can include selecting corn hybrids with better disease resistance or tolerance, alternative cover crop species and precise planting to maintain separation between rye plants and corn rows to manage the potential risk of disease.

Robertson said better understanding of using winter rye before corn production will lead to improved management practices to ensure the optimum use of cover crops for environmental and crop production benefits.