It has been well-documented that annual precipitation across parts of South Dakota and the Midwest has increased over time (Figure 1).

It does not come as a complete surprise then that we have seen an increase in the installation of subsurface tile drainage systems in eastern South Dakota (Figure 2).

Tile drainage can reduce sediment erosion and particulate-bound phosphorus losses on agricultural land with poor natural drainage. Studies have also shown, however; that tile drainage may increase exports of soluble nutrients to surface waters such as nitrate-nitrogen and dissolved phosphorus.

Nitrate lost from agricultural soils is costly to producers, poses environmental concerns when entering rivers and lakes, and are a health risk when reaching wells and aquifers used for drinking water.

Balancing the amount of N needed for optimum plant growth while minimizing nitrate-nitrogen (NO3-N) transported to ground and surface waters remains a major challenge for those attempting to understand and improve agricultural nutrient use efficiency. 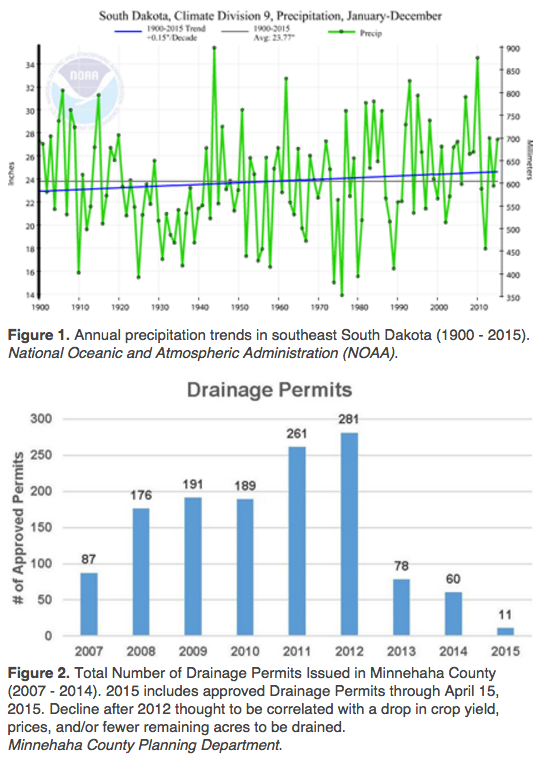 In one study, nitrate losses in subsurface drainage water from continuous corn and corn-soybean systems were about 37X and 35X higher, respectively, than from the alfalfa and CRP systems.

This was due primarily to greater season-long evapotranspiration resulting in less drainage and greater uptake and/or immobilization of N by perennial crops.

Evapotranspiration (ET) is a term used to describe the transport of water into the atmosphere from soil (soil evaporation), and vegetation (transpiration). In other words, the longer you continue to grow something, the less likely it is that nitrogen will be lost from the soil profile.

In principle, the incorporation of cover crops into a rotation can be thought of as a way to mimic those perennial systems (prairie) where nitrogen is rarely lost.

Unless the ground is frozen on rangeland, something is always going to be growing. Cover crops extend the vegetative growing season on your fields and reduce nitrate losses, compared to no-cover crop, by converting inorganic N compounds into an organic form. As cover crop residue decomposes the N is released to the next year’s crop. Cover crops also have the potential to increase soil organic matter, and reduce soil erosion and fertilizer inputs.

While seed and planting costs (and spraying if the species overwinters) need to be weighed against any potential agronomic benefits they may provide, cover crops can be an effective option to improve water quality in subsurface tile drainage systems.

Tips on Using Cover Crops After a Drought