Populations of winter annual weeds will become more prevalent in early April and can compete with wheat and barley, possibly slowing the rate of crop development and reducing yield. If winter annual weeds like common chickweed, henbit, purple deadnettle, horseweed and others emerge with the small grain and are left unchecked, the potential impact on yield could be great.

Harmony Extra is still probably the most broad-spectrum herbicide for broadleaf control. Harmony SG contains only one of the active ingredients (thifensulfuron) in Harmony Extra and does not have the same weed control spectrum. Clarity, Banvel, 2,4-D or MCPA can improve the control of some winter annuals and perennials, and Stinger is the most effective small grain herbicide for thistles.

Harmony SG or Harmony Extra should be included where control of chickweed is desired, since these are the only herbicides that control this weed, but if it is ALS-resistant then you will need to include Glory or Starane.

Consider using 2,4-D and Clarity or Huskie if marestail is a problem in small grains. Prowl H2O is also labeled for use up to growth stage 7 but it must be applied before weeds germinate or tank mixed with effective post-emergence herbicides. Refer to the Agronomy Guide table for additional details.

Herbicides applied in early spring can be slow under the typically cool conditions in March and early April. Remember that cool (less than 50 F) cloudy days can reduce herbicide activity. Applications this early are not likely to effectively control dandelions or Canada thistle. These weeds would be more effectively controlled with a later spring application.

Weedy grasses, such as downy brome, cheat, annual bluegrass, annual ryegrass and roughstalk bluegrass are also becoming more of a problem in Pennsylvania. The wheat herbicides available for control of grasses — Axial, Maverick, Osprey, PowerFlex and Prowl H2O — are most effective when applied in the fall. Some of these products can work in the spring, but to be effective, the weeds must be small. Or in the case of Prowl, it must be applied before weeds germinate.

Once wheat has passed Feeke’s Stage 6 (i.e., when the first node of stem is visible), the risk of herbicide injury from 2,4-D, MCPA, Banvel/Clarity or Curtail increases and application of these herbicides is not recommended.

In this situation, the remaining herbicide options for broadleaf weed control are Harmony Extra (similar products: Edition, Treaty Extra, Nimble, others), Harmony SG (similar products: Treaty, Harass, Volta), Buctril, Stinger and Starane. Harmony Extra and Harmony SG (and the similar products listed above) can be applied to wheat until the flag leaf is visible (before Feeke’s Stage 8). Buctril, Huskie, Stinger and Starane can be applied to wheat up to boot stage (before Feeke’s Stage 9). Below is a wheat growth stage graphic from the Agronomy Guide (page 346). 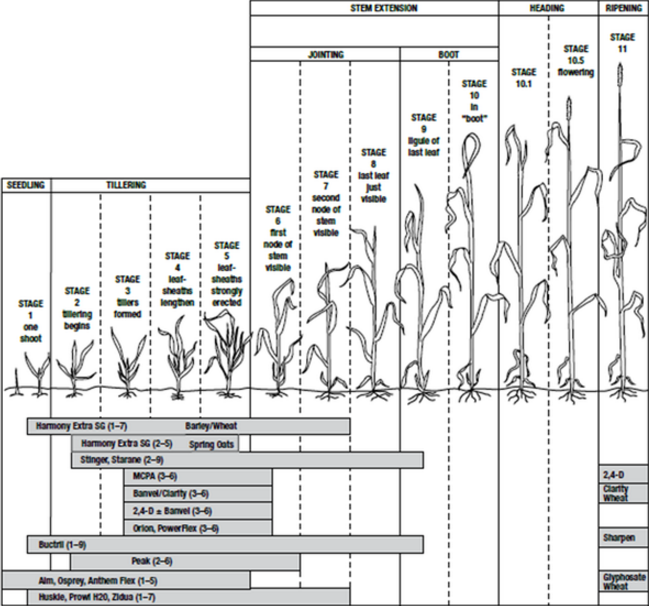 Each spring there are questions about the risks associated with 2,4-D or MCPA application to wheat past Feeke’s Stage 6. Wheat tolerance of 2,4-D is highest between Feeke’s stages 3 and 6 and is lowest in Feeke’s Stages 9 and 10. Between stages 6 and 9, sensitivity to 2,4-D gradually increases as wheat growth stage advances. Thus, the risk of injury increases as wheat growth stage advances between stages 6 and 9. Severe injury is highly probable when 2,4-D is applied at Feeke’s stages 9 and 10.

It is recommended that application of 2,4-D to wheat be made after wheat has reached Feeke’s stage 3 but prior to Feeke’s stage 6. If growers choose to apply 2,4-D at later stages, they need to understand the associated risk. This risk can be minimized by applying the amine form of 2,4-D or reducing the rate of a 2,4-D ester.

A much better alternative on wheat past Feeke’s stage 6 is to use another broadleaf herbicide with a wider application window that is effective on the weeds present in the field.

Liquid urea-ammonium nitrate fertilizer (UAN) is a common carrier for herbicides in wheat. The most common herbicide to be used in this manner is 2,4-D ester (2,4-D amine is difficult to mix in UAN).

Application of herbicide in liquid nitrogen (N) can cause leaf burn from the N, especially under hot, humid conditions. This risk increases with later wheat growth stages because more leaf area is exposed to the treatment and recovery time is shorter.

In addition, the use of surfactant (required with herbicides such as Harmony Extra) greatly increases leaf burn potential. Research at Michigan State University has demonstrated that excessive leaf burn from high N rates combined with surfactant can reduce wheat yield. To minimize this risk: