Long before cover crops became a hot topic among farmers, Wellman, Iowa, no-tiller Dennis Berger drilled cereal rye in the fall of 1978. Then in the spring of 1979, he used paraquat to kill the rye before no-tilling corn.

“We have come a long way in no-till technology,” says Steve Berger, Dennis’ son. “That field has been continuously no-tilled with corn or soybean since 1979.”

Long-term no-till and cover crops are a winning combination for Berger. He and his father no-till all of their 2,200 acres of corn and soybeans in a 50-50 rotation. In addition, they finish hogs.

They no-till corn on 30-inch rows and drill soybeans on 10-inch spacings. Berger has been a past speaker on cover crops at the National No-Tillage Conference.

During the past 8 to 10 years, the Bergers started no-tilling a higher percentage of their acres to cereal rye. They drill it in the fall, kill it in the spring with glyphosate when the rye is 4 to 10 inches high and then no-till corn and soybeans into the dying stubble. 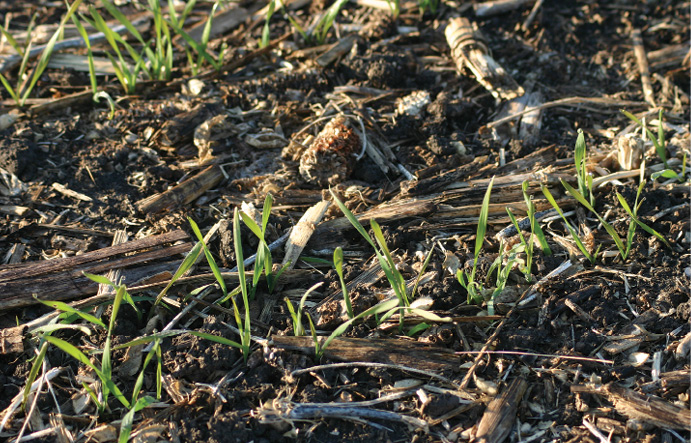 Berger says he prefers to no-till drill cereal rye between Sept. 15 and Oct. 15. At the very latest, he wants cover crops no-tilled by Nov. 1.

The fields seeded into cereal rye that take priority are highly erodible with 6% to 12% slopes in which they’ve just harvested soybeans.

“These fields are the most vulnerable to erosion,” Berger says. “We drill a lot of rye on level fields to get something growing if harvest is early and going well.”

But sometimes applying manure must come first, particularly if manure pits are full, Berger says. Given his druthers, he wants to apply the manure in late November or early December.

“We like to plant rye when it is warm and the rye will grow rapidly,” Berger says. “We then apply manure later when it’s colder and the risk of nitrogen loss is lower due to slowed-down microbial activity.

“It’s important to get the cereal rye seeded early so it germinates and gets some growth before winter. Then, even when it gets cold, the cover crop is doing its job by protecting vulnerable soils between harvest and planting and by capturing sunlight. We like the tremendous root growth from cereal rye.”

In a corn-soybean rotation, the cover crop is the third crop. 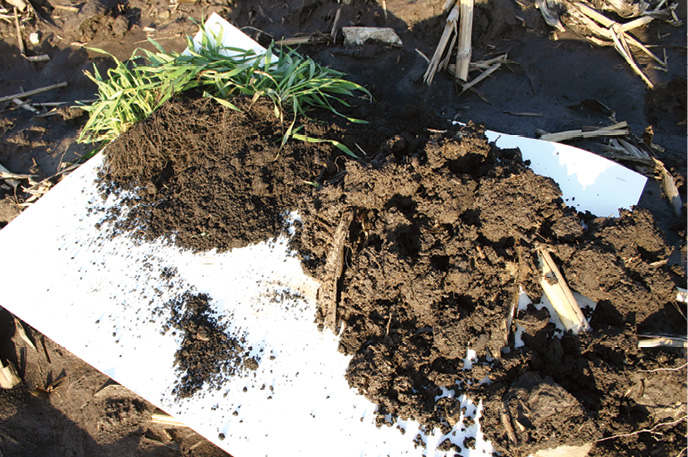 “We can’t do the 5-year crop rotation with forages economically like Grandpa did,” Berger says. “But cereal rye as a cover crop between corn and soybeans is a good alternative that protects and builds the soil.”

Without cover crops, fields are bare for approximately 6 months.

“I never like to see soil exposed,” he says. “I want it covered with something growing all the time.”

Berger says that when the sun hits bare ground, none of the light gets used. But with a cover crop in the field, photosynthesis creates carbon, which then increases organic matter.

Seeding cereal rye in the fall as a cover crop protects vulnerable harvested soybean fields. But success with cover crops is not automatic.

While Berger wants his cereal rye seeded each fall by Oct. 15 — and no later than Nov. 1 — the late harvest of 2009 pushed that to the third week of October. They no-till drilled the rye at a rate of 50 pounds per acre.

Flying on cereal rye tends to result in uneven strips of growth, but it depends on the skill of the pilot and the shape of the field, Berger says.

“You get a real, nice start to the stand. You get maximum growth by drilling it in the first week of September. You get more root mass.”

Even after the weather turns cold and winter sets in, cover crops will grow if there’s a break in the weather.

Berger says there have been days in December when the temperature hits 50 F. Then the rye will have more root growth.

When it comes to no-tilling cereal rye behind corn, ideally he wants to drill the same day he harvests corn. 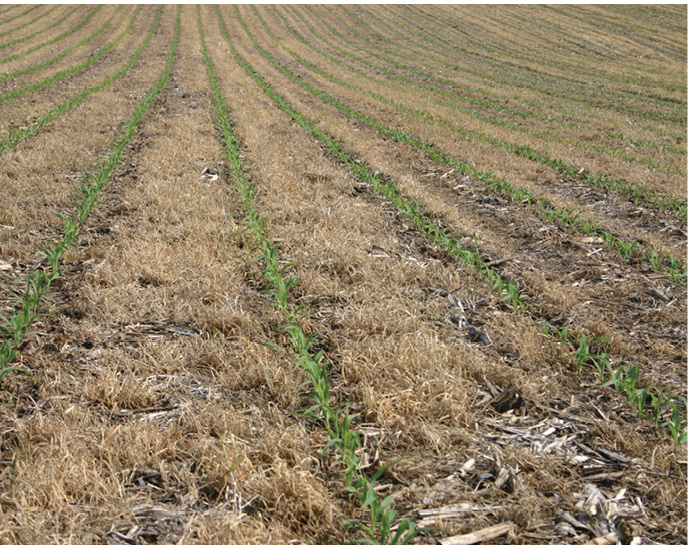 But if no-tillers can’t drill their cover crop in the fall, flying on cereal rye costs $12.50 an acre, in addition to the cost of the seed. Custom drilling rye would cost about the same, he estimates. Getting that early stand establishment produces maximum benefits from cover crops, Berger says.

Right now, cereal rye is the most practical cover crop for Berger’s operation. He says oats would be his second choice, but there’s not as much root growth. Oats are inexpensive and will winterkill, saving a herbicide trip in the spring.

“But black oats is a tropical plant that won’t adapt in our part of the world,” Berger says.

Long-term no-till improves soil tilth, benefits that were obvious during the rainy fall of 2009, Berger says.

It’s easy to see the benefits of no-till with cover crops versus fields that are continuously tilled, he says.

The latter have no soil structure. Berger describes the soil in these fields as “mush.” Equipment sinks in.

But he cautions growers to avoid unreasonable, short-term demands of what cover crops can do for your soil.

Instead, he believes cover crops have long-term benefits just the way terraces do. Terraces are a long-term capital investment. Similarly, the benefit of cover crops show up over time.

After trying cover crops for the first time in 1978, the Bergers didn’t use them much in the 1980s and 1990s. In hindsight, those decades were ones of learning how to no-till, Berger says.

“Back then, no-tillers focused on equipment, fertilizer and weed control,” he says.

While there are visible, measurable benefits to cover crops, some will take generations to see. Consider what’s happened to organic matter at the longest continually cultivated plots in the United States, the Morrow plots at the University of Illinois, he says.

Cover crops are not a “silver bullet” that stops the loss of organic matter, he says. Berger stresses that crop rotations are important to managing organic matter.

“When our township was surveyed in June 1841, the soil may have had 4% to 5% organic matter. The surveyor, Mr. Ewing, wrote in his log, ‘First rate land.’ Nearly 170 years later, the organic matter levels may be 2% to 2.5%. With no-till and cover crops, organic matter may begin to stabilize and stop the slow decline.

“The organic matter and topsoil are the most important assets we have as farmers. And we think rye is one of the best opportunities to enhance that.”

While there isn’t enough vegetative growth with soybeans to stop the loss of organic matter in a corn-soybean rotation, there may be enough residue from continuous corn to do this, Berger says.

Berger saw benefits of cover crops in the fall of 2009. With firmer fields, which had better soil tilth, the Bergers were able to get their crops out earlier than most farmers.

The benefits of better tilth, more stable soil particles and firmer fields that support heavier loads of equipment come into play in the spring, too. It’s a myth that no-tillers must wait longer to plant than those tilling their fields, he says.

In the wet springs of 2008 and 2009, the Bergers were some of the first farmers in their area to plant.

“We can get going quicker than neighbors who don’t no-till,” he says.

Using cover crops creates benefits, but there’s not an immediate cause and effect between them and yield improvements, Berger says.

He points to a field that’s been no-tilled for 31 years, the one they first planted cover crops on in the fall of 1978. This past fall, corn in the test plots on that field averaged 250 bushels per acre.

Berger calls the planter the most critical piece of equipment. He says if you are shooting for 80% emergence, you have a problem from the start.

“We invest a lot time and energy to establish good corn stands, which is a challenge for no-till corn,” Berger says. “If I can get a uniform, perfect stand of corn during the first two weeks of May, we are better off than our conventional-till neighbor.

“The advantage swings to the no-till system for the remainder of the growing season.”

Cereal rye root systems are massive and improve the soil structure to a greater depth than any piece of tillage equipment.

“Anything we can do to promote deeper rooting system of corn is beneficial,” Berger says. “If we can drive the corn roots 12 inches deeper, that gives the corn plant an additional 2 inches of water. That can make the difference during some growing seasons.”

Washington County, Iowa, was surveyed in the 1840s. Like many farmers in the Corn Belt, Berger has removed old fence lines to enlarge fields. While the fences are out of sight, they are not out of mind when he harvests.

Untilled grass in old fence rows likely has 4% to 5% organic matter, Berger says. The yields from the old fence lines in his fields challenge him.

“How can I make the rest of my farm like that old fence row? I think we can get a small part of that back by using cover crops,” Berger says.

But he cautions that success with no-till, cover crops and efforts to improve soil health takes time.

“If it were easy and immediate, everyone would be doing it,” he says. “You can’t get something for nothing. You’ve got to work to get things in life and it’s the same thing with soil.

“It took thousands of years to create soil. You just can’t expect your soil profile to change in a few years.

“Between no-till, cover crops and manure, that helps us improve soil,” he says. “We won’t know if we’ve been a success until a farmer 150 years from now says, ‘Darn, they did a good job.’”