With generally above normal February temperatures and little snow cover in much of western Nebraska, some growers are asking whether winter wheat that’s starting to grow may be at increased risk for winter injury and winterkill.

This year’s winter wheat is in pretty good condition and is less vulnerable to the winter injury suffered by the 2015 crop, described by some as the worst in 50 years. This year’s crop is less likely to face severe injury from recent temperature swings for several reasons:

• There was good moisture for planting and fall growth in 2015. The previous year wheat was planted in dry conditions with limited moisture in the fall.  Dry soil warms up and cools down about six times faster than moist soil, creating a wider and faster fluctuation of temperatures that is hard on crowns and roots.

• Moist soil allows for better planting conditions and seed placement. In 2014 soils were hard and dry and seed often wasn’t planted to the recommended depth, meaning that crowns formed closer to the surface where they were more vulnerable to cold air extremes.

• Fall 2015 growth was good and plants had a chance to winter harden (vernalize) before the cold set in. These bigger plants also provide better protection from wind erosion that can injure plants; however, bigger plants may lose some of their winter hardiness before smaller plants would.

One of the biggest concerns now is for plants that start growing earlier than normal because of warmer temperatures and then experience a rapid decrease in air temperature with little snow cover.

This change from above-normal temperatures to freezing temperatures in a short period of time is when winterkill is most likely to happen. The greater number of wild temperature swings that occur throughout the spring, the greater the risk for winterkill. 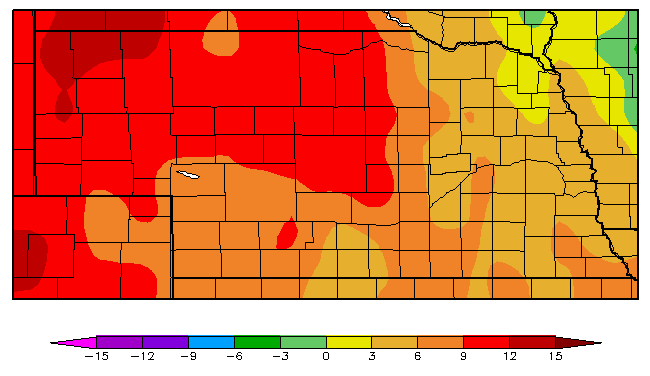 On the other hand, swings in temperature that occur over the course of a few days are more likely to only kill the top growth without causing significant damage to the plant.

If the plant’s first node is above ground at the time of a hard freeze, the stem and spike would usually be killed, but the plant could come right back from the secondary tillers and produce good yield. The crown is set and the plants are growing and putting energy into the roots and secondary tillers. Damage to the stem and spike would be similar to that from an early hail storm or feeding cattle.

Also, this year with the early February snow and rains, there may be pockets of serious damage in low-lying areas where water pooled and refroze around plants, making it impossible for them to breathe.

If severe winter injury or winterkill is suspected, give plants an opportunity to recover before assessing damage or tearing out a field. Also consider plant-back restrictions on any herbicides already applied to the field.

Historically all of the wheat varieties planted in Nebraska were photoperiod sensitive, which meant stem elongation and transition to reproductive stage (head initiation) depended on day length rather than temperature.

Photoperiod sensitive plants don’t start growing during really warm January days because there just isn’t enough daylight to trigger growth. When a hard freeze occurred in February, they were less likely to be injured.  Further south, the wheat varieties used are not photoperiod sensitive, while states north of Nebraska still use these varieties.

This year, lines that are photoperiod sensitive may initiate growth later and have a shorter reproductive time, possibly contributing to lower yield. However, if there is a hard freeze, the opposite will be true. Historically, it has been beneficial to be photoperiod sensitive, but with climate change, the risks are decreasing.