The 2015 growing season was the second year for a corn post-emergent drag hose study at the Ohio Agricultural Research and Development Center’s Northwest branch in Holtville. The purpose of this plot is to determine how far along in development the corn crop can be before the damage from a drag hose would rule out sidedressing emerged corn with livestock manure. A 15-foot-long drag hose filled with water was used for this study.

The 6-inch-diameter drag hose was pulled across each plot twice (going in opposite directions) at corn V1-V5 growth stages (V5 stage was not completed in 2015 due to excessive rainfall). The tractor speed was approximately 4 miles per hour. The plot was replicated four times in a randomized block design. 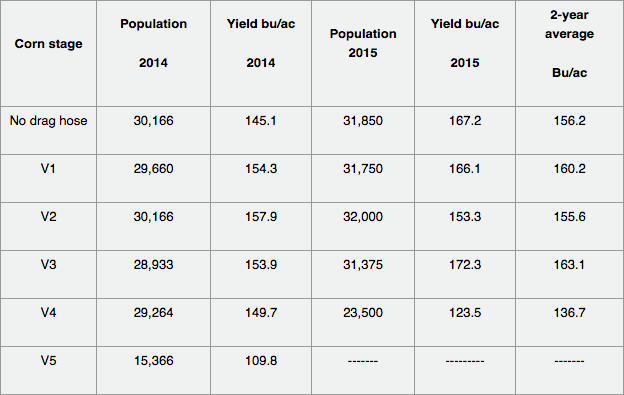 The results of this 2-year research study suggests corn could be sidedressed with liquid livestock manure, using a drag hose, up to V3 (three leaf collars) without a statistically significant yield loss. This study will be repeated in next three seasons to establish a 5-year data base.

Videos of the 2014 and 2015 experiments are available on YouTube.