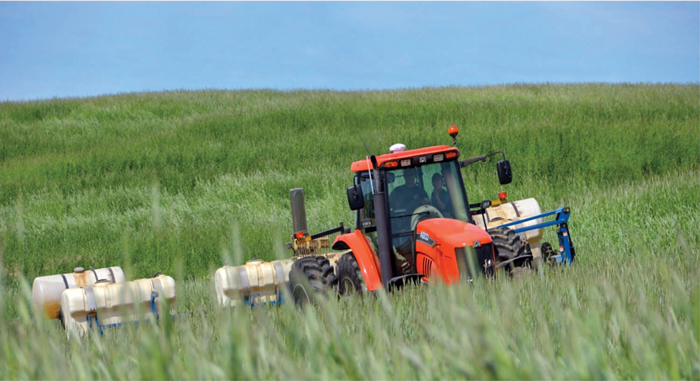 The Next Step in No-Till: Planting into Living Covers

By Laura Barrera posted on January 11, 2016 | Posted in Cover Crops

Pennsylvania no-tillers Lucas Criswell and Jim Hershey extend and advance the benefits of cover crops by planting directly into them.

BIG COVERS. When Lucas Criswell started no-till planting into living cover crops, the covers were about 15 inches tall. Today, he plants into covers that grow to 3 or 4 feet high, saying they’re the key to protecting the soil from erosion and building soil health.

If no-till isn’t enough to stop erosion, what is?

The Lewisburg, Pa., no-tiller does some custom application work for other growers and still sees erosion occurring on long-term no-till fields — even fields that grow short cover crops in the hilly region of central Pennsylvania.

But on Criswell’s farm, where he plants into cover crops that are as tall as his waist, he doesn’t see any erosion anymore.

Criswell recalls a 5-inch-rain that fell in an hour and a half in 2014. It cut a 3-foot-deep trench in his lawn, and he was afraid to see the condition of his fields.

In a field where he had just soybean stubble, which he intentionally left that way for a side-by-side, he saw the residue move. But on the field where he had rolled rye, it stayed in place — protecting the soil between the corn rows.

“That was another a-ha moment for me,” he says.

Erosion control isn’t the only benefit to no-tilling cash crops into living cover crops. Gerard Troisi, Criswell’s crop consultant, says that doing this allows them to continue capturing energy, which creates a bigger root system and allows them to store that…

Premium content is for our Digital-only and Premium subscribers. A Print-only subscription doesn't qualify. Please purchase/upgrade a subscription with the Digital product to get access to all No-Till Farmer content and archives online. Learn more about the different versions and what is included.
KEYWORDS dawn zrx roller-crimper Jim Hershey lucas criswell Nitrogen management no-tilling green planting into cover crops roller-crimper seeding cover crops

What I've Learned From No-Tilling: Taking the Next Step with No-Till