Can Cover Crops Work in the Upper Peninsula?

Cover crop benefits have long been recognized, but because of the region’s challenging growing season, it has been questioned whether or not they are economically viable. Researchers from the Michigan State University Upper Peninsula Research and Extension Center (UPREC) have partnered with the Steve Brock Dairy Farm in Menominee County to test the viability and benefits of integrating them into their crop rotation.

Steve Brock shared an experience with MSU AgBioResearch and Michigan State University Extension researchers on his use of oilseed radishes a couple years back. He was given some seed and decided to throw it out in the field to see what would happen. The following year, all but forgetting about the radishes, he went in to harvest the corn silage that had been planted that season, and pulled off a bumper crop.

As he thought back to what would have caused the yield increase, he remembered the seed he threw down and could only guess it had an impact — noting no other management differences amongst fields. Dean Baas, Sustainable Agriculture Extension educator with MSU Extension, noted that radishes can reduce compaction in field, add diversity to the field and winterkill nicely so spring termination is not necessary. They are a particularly promising option following corn silage, “where it may be difficult in the Upper Peninsula to establish cover crops after corn harvested for grain, especially species other than winter cereals,” Baas says. “There is a longer fall growing window after silage harvest that can allow farmers to try some more diverse cover crops.”

Through sharing that experience, researchers at UPREC felt compelled to test the theory, given little practical research data exists on cover crop use in the U.P. Also noting that the Steve Brock Dairy Farm location has an advantage in Menominee County — situated in what the locals refer to as the “banana belt” — at least relative to the rest of the Upper Peninsula, with a bit of a longer growing season. 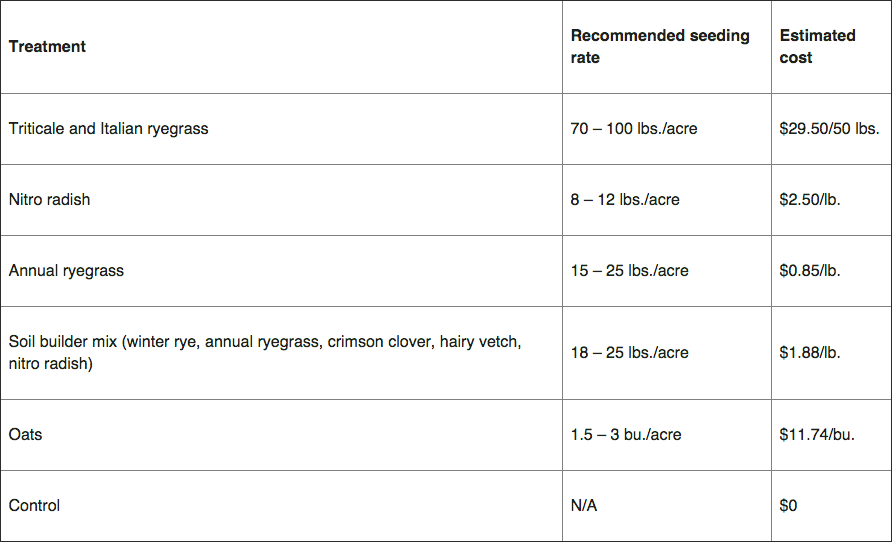 In addition to taking observations on stand establishment, soil samples were collected and analyzed using the Solvita method, which measures soil respiration and can be directly linked to soil productivity.

A fall demonstration day was hosted in-field in October to show off the various treatments and discuss research plans for 2016. UPREC crop researcher, Christian Kapp, is looking forward to the 2016 season.

“The treatments were very well established going into the winter, and I look forward to seeing how the 2016 corn silage harvest performs, in relation to the various cover crops,” he says.

Kapp also noted that soil sampling will continue throughout next year to better understand the various crop impacts to soil life.

If you are interested in learning more about cover crop research at MSU, please contact Ashley McFarland at 906-439-5176 or ashleymc@anr.msu.edu.

What I've Learned From No-Tilling: Double-Cropping And Cover Crops Work Even In The North

Can Organic No-Till Work in the Field?

Rotations or No-Till Most Critical?