In recent years, sulfur (S) deficiency in wheat has become common in many areas of Kansas, particularly in no-till wheat.

There are two likely reasons for this: a reduction in sulfur additions to the crop from atmospheric deposition and phosphorus fertilizer applications, and cooler soil temperatures as a result of no-till planting, which slows S mineralization in the soil. The net effect of these factors is a significant reduction in the crop available S.

The photo below is a good representation of the problem. Generally the S-deficient wheat is yellow and stunted, and the problem is found in patches in the field, especially in areas where there has been previous soil erosion or soil movement.

The patchy S-deficient areas of the field are often found on hilltops or sideslopes where erosion has occurred and soil organic matter is reduced, or where leaching is more pronounced. In terraced or leveled fields, wheat in areas where topsoil was removed or significant cuts were made also commonly shows symptoms.

Sulfur deficiencies in wheat have been showing up early in the spring, shortly after greenup, before organic S is mineralized from soil organic matter, and before wheat roots can grow into the subsoil to utilize sulfate accumulated there. 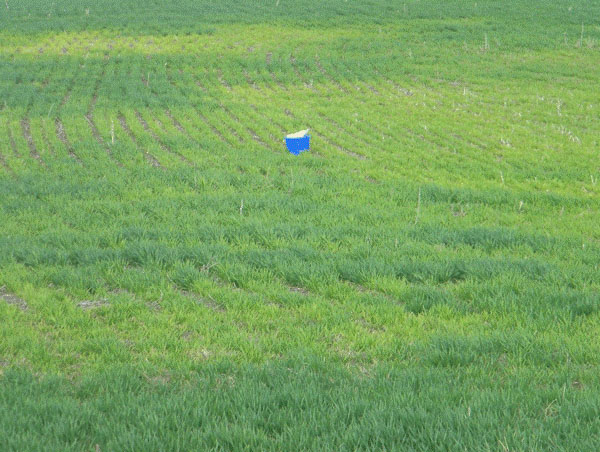 Deficiencies of S are often difficult to identify because the paling in crop color is not always obvious. Crops lacking S also may be stunted, thin-stemmed, and spindly. In the case of wheat and other cereal grains, maturity is delayed. Due to the slower growth and lack of good tillering, winter annual weed competition is also enhanced.

The majority of S in soils is present in organic forms in surface soils and as sulfate. Sulfate is relatively soluble, so it tends to leach down from the surface soil into the subsoil.

In many of our Kansas soils it will accumulate in the B horizon in two forms. Some will be sorbed to clay surfaces and coatings similar to the processes whereby phosphates are sorbed, though sulfate will not be adsorbed as strongly. Sulfate will also be present in the subsoil of many Kansas soils as gypsum.

Traditionally, S deficiency was most common on high-yielding crops grown on irrigated sandy soils low in organic matter and subject to leaching. However, due to the reduced additions from the atmosphere (there is less S in the air now) and continued crop removal, an increasing number of finer-textured soils have shown S deficiency in recent years.

A soil test for available sulfate-S in the soil profile is available. For proper interpretation of this test, soil organic matter, soil texture, the crop to be grown, and the expected yield level all need to be factored in. Since sulfate-S is mobile, sampling to a 24-inch depth is important. Accurate estimates of S needs cannot be made from a surface sample alone.

However, due to the relatively high demand for S during the rapid vegetative growth phase of wheat growth, and relatively shallow rooting by the wheat crop at this time, the S measured in the deeper, subsoil levels by the test may not be available to wheat in the early spring, especially where soils are cold.

Many fields in north-central and northeast Kansas now have an established history of S deficiency for wheat. In this situation rather than waiting for symptoms to appear in the spring, farmers may want to consider a winter topdressing application of S as a preventive measure.

There are many S-containing fertilizer materials. Several dry materials are available that can be blended with dry phosphorus or nitrogen fertilizers for winter/spring topdressing. Some of these products are best used in preplant applications, however.

There are also liquid sources of sulfur fertilizers available.

Application guidelines supplied by the manufacturers of both these liquid products caution that these products should not be applied in a foliar application or as foliar sprays to actively growing plants.

Topdressing with thiosulfate and UAN can be done early, before Feekes 5, and at temperatures below 70 degrees. But some burn can be expected, especially with KTS. These products would be good sources for pre-plant application, however.

Tips for Topdressing Wheat with Sulfur

Recommendations for Topdressing Wheat with Sulfur