Steve Hoffman says these sorghum rows — left in place after prevented cotton planting last spring — are over a year old and will still serve to catch snow and hold moisture this winter until it’s planted to cotton in next spring. Hoffman has extrapolated figures showing that over 2,000 pounds per acre of earthworm castings are present in some of his no-tilled fields.

Organic-matter readings from soil tests pretty much sum up the success Steve Hoffman has seen converting his farm in the Texas Panhandle to no-till practices.

While most full-tillage farmers in this area find it notoriously difficult to improve organic matter to 1%, Hoffman is seeing 4% readings in many fields.

He pursues soil improvement with dogged determination and minimal equipment, relying heavily on crop residue from his grain sorghum-cotton rotation.

A no-tiller since 1996, Hoffman’s success over the past 19 years earned him the Conservation Farmer of the Year Award for 2015 from the Tierra Blanca Soil and Water Conservation District at Hereford.

Hoffman began no-tilling to cut expenses. While tilling, Hoffman built a rig equipped with coulters, sweeps and chisels to reduce field trips, but it still wasn’t enough for him. When he decided to no-till corn after corn, he got near-ridicule from equipment dealers and onlookers. 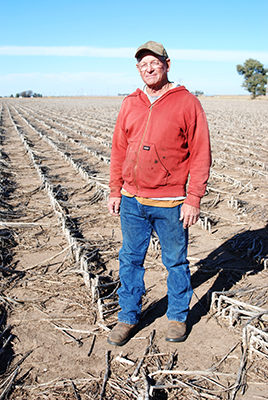 "No-tilling takes more deliberation and management, admits Steve Hoffman, who raises cotton and grain sorghum near Hereford, Texas. “Once you decide, you have to just do it,” he says. “The soil tells me I made the right decision. I wouldn’t go back.”

“I started with an 8-row John Deere MaxEmerge planter — with no special no-till equipment. It was rigged just like I was pulling into bare tilled ground,” he recalls. “There was some clogging and hairpinning of residue, but it worked. I made my mind up that I was going to no-till and not make excuses. Over the next few years I added trash whippers on the planter, but no major equipment changes.”

Hoffman was prepared to accept lower yields in exchange for less labor and equipment expense, and he never looked back or regretted the decision.

“I used to watch what the neighbors were doing and imitate that, but came to believe that you need an edge if you want to survive in farming. That edge with no-till,” Hoffman says. “We have only marginal irrigation available. A transition to total dryland farming awaits in the future.

“No-tilling requires less time, machinery, and irrigation with the water we have left. No-tilled soil better absorbs moisture from rainfall and snow in a dryland situation.”

He paired initial planting equipment with a homemade tractor-mounted spray rig with saddle tanks on each side of the tractor and a trailing 90-foot boom.

Hoffman now uses a 60 foot, 24-row John Deere MaxEmerge planter on 30-inch spacings, with trash whippers, pulled by a 115-horsepower John Deere 7600 tractor. His only planter modification was adding a single aftermarket spiked tooth closing wheel paired with a factory closing wheel for each planter unit to keep the soil closed over the seed row from baking and crusting. Extra springs on the planter units give more down pressure if needed.

One issue Hoffman has is that his planter’s tires run over the rows of standing crop residue from the previous crop and the stalks eat up factory tires. So he put 22-ply aircraft tires on the planter to handle that problem. 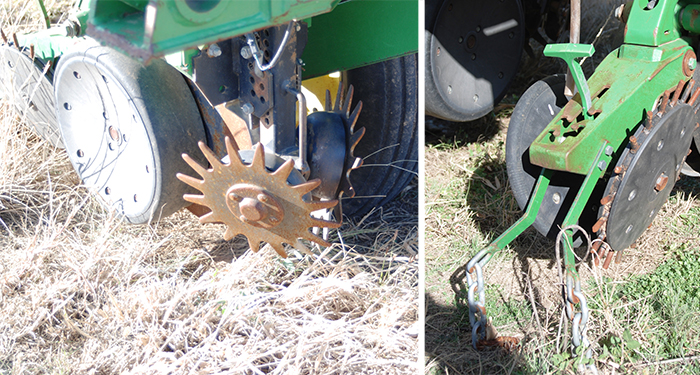 Steve Hoffman pairs a single spiked-tooth closing wheel with a factory closing wheel on his John Deere 24-row MaxEmerge planter to keep soil closed over the seed furrow from baking and crusting. He’s added trash whippers and extra springs for more down pressure. Cotton is planted in standing grain sorghum residue by moving over 15 inches with the planter. Some fields have almost 20 years worth of row patterns based on Hoffman’s long-running no-till efforts.

Hoffman plants sorghum at 8 plants per foot of row on semi-irrigated acres, and 1 seed per foot on dryland. He seeks dense residue cover following the crop. Cotton is planted at 3-4 seeds per foot.

His standard rotation is from sorghum to cotton, a system that works well with good sorghum residue.  He moves the planter over 15 inches — halfway between preceding crop rows — each year at planting.

In 2015, heavy spring and early summer rains prevented cotton planting. He planted corn for the first time in several years at a rate of 24,000 plants per acre. Even with the early rain, he was mindful that hot, dry weather could return, and opted for a lower seeding rate.

“August was dry and I had to irrigate corn. The lower seeding rate may have limited yield potential, but we made 180 bushels per acre,” Hoffman says.

A Conservation Stewardship Program contract through the local NRCS office let Hoffman move up from the tractor-mounted sprayer to a AGCO SpraCoupe with auto steer, a 720-gallon tank and 90-foot boom. The sprayer is equipped with low-drift air induction nozzles that can operate at lower pressures.

Glyphosate serves Hoffman well for controlling Johnsongrass and volunteer grain sorghum. He uses pre-emerge herbicides including Valor, Sharpen, and Atrazine.  He uses Sharpen pre-emerge on sorghum and to clean up hailed-out cotton fields if he must replant them to sorghum.

He also uses a rope-wick applicator to apply Paraquat to control marestail, and has used Paraquat in a hooded sprayer on seedling Johnsongrass. 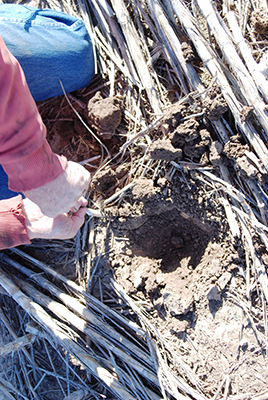 Worm castings are visible at the end of the pliers held by Steve Hoffman in this field near Hereford, Texas, covered with grain sorghum residue.

“In 2014 there were a lot of 2.6% and 2.9% readings. This year we hit 4% in a few fields. Organic matter levels don’t stay constant. Sometimes they’re all over the place, depending on moisture and bacterial activity. I keep the topsoil covered so that moisture is retained so things work in the soil.

“With no-till, I can get in the field much sooner after a rain because of the improved soil structure. Driving over a no-tilled field doesn’t pack the soil down like it does in a plowed field.”

Hoffman constantly checks fields for evidence of good things happening. Soils have mellowed enough that he doesn’t even need a shovel to dig into the soil. He probes several inches deep with the handle of his pocket pliers and his fingers, finding old crop roots, residue of previous crops from several years, and evidence of abundant earthworms that have steadily returned.

“I found all kinds of earthworm castings — so I counted all of them in a square foot, extrapolated an estimate of the amount of worm castings in the field and came up with 2,000 pounds per acre,” he says. “You dig down a little and there are cavities full of worm castings. When you don’t plow, the soil has structure and is full of old crop roots and worm tunnels. You’re working with nature instead of against it.

“I used to furrow-dike everything because I really liked seeing the water standing in the field and not running off after a rain. Now, the water soaks in fast and just doesn’t leave, and you don’t need a lot of extra steps.” 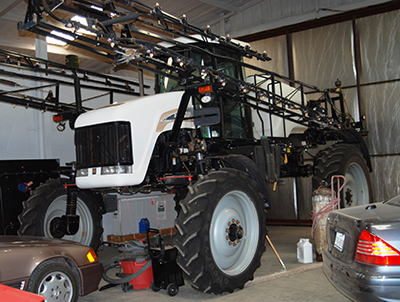 A Conservation Stewardship Program contract let Steve Hoffman move up from a tractor-mounted spray rig to this SpraCoupe with auto-steer, 720-gallon tank and 90-foot boom. Because he mostly rotates between grain sorghum and cotton, Hoffman can attack glyphosate-resistant weeds aggressively with varied herbicides during the sorghum rotation and maintain clean cotton fields.

Facing the task of planting corn for the first time in several years, Hoffman checked with a local banker on the average dollar-per-acre cost of growing corn under tillage. The figure he was given was $600 per acre. Hoffman brought in his 180-bushel crop for $350 an acre with no-till.

“Last year, soils were tested in late April and carryover nitrate levels were low to medium at 10-34 pounds of nitrogen per acre. With organic matter averaging 2.3%, the potential nitrogen availability was 76 pounds per acre,” he says.

“In dry years I use half the potential, and in wetter years I use the full potential. In 2014, I had 60-100 pounds of nitrogen per acre available and tissue samples showed normal to slightly less than normal values in the leaves at mid-season.”

Mike White, district conservationist with the Tierra Blanca SWCD, says Hoffman’s no-tilling is inspiring other local farmers, and some are beginning to implement or improve on stewardship practices.

“With no till, we’re improving the soil and making the best use of moisture from rain and snow,” Hoffman says. “I’ve made enough from no-tilling to raise my family, send the kids to college, enjoy the grandkids, buy a few toys and, thanks to time and labor savings, have the time to play with them,

“No-till takes more management. You have to spend time on decisions. Once you decide, you have to just do it. It takes about 5 years to really get going. Then you look at soil organic content trends to see if you’re going in the right direction. The soil tells me I made the right decision. I wouldn’t go back.”

Reaching Beyond Equipment for No-Till Success